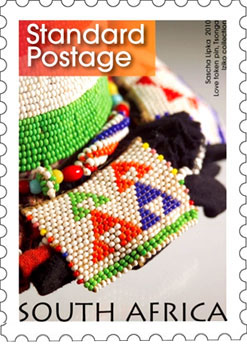 This delicately beaded Tsonga love token
is one of many colourful items featured
in the beads stamp series. 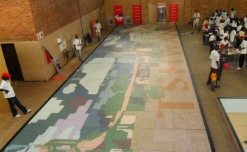 The record-breaking stamp mosaic covers
an area of 160 square metres.

South Africa is hosting the Joburg 2010 International Stamp Show, which coincides with the release of a new definitive stamp series for the country, and also features an attempt to break the Guinness World Record for the largest stamp mosaic.

Sponsored by the South African Post Office (Sapo) and the Philatelic Foundation of South Africa, the event takes place at the Sandton Convention Centre from 27 to 31 October under the auspices of the Federation of Inter-Asian Philately, to which South Africa is affiliated.

The show is sanctioned by world philately governing body Fédération Internationale de Philatélie, and is the first international philatelic event to be held on South African soil since Ilsapex 98.

A highlight of the show is the inclusion of the 26th Asian International Stamp Exhibition, which has never been seen on the African continent and features over 300 exhibits.

Stamp enthusiasts have also been looking forward to an exhibit of an assortment of stamps from the personal collection of Queen Elizabeth II. This priceless selection is chaperoned by Michael Sefi, the Keeper of the Royal Collection.

The first Union of South Africa stamp, issued in 1910, will be on display, as well as the Sapo archive. Visitors will be able to buy personalised stamps with an image of themselves or their partner, mom or pet.

A number of auction houses and dealers will be on hand for the serious collector, and Sapo will operate a fully functional post office within the exhibition hall.

South Africa is expecting to welcome philatelists from 45 countries to the long-awaited event. Entry to the stamp show is free.

To coincide with the show, Sapo has issued its eighth definitive stamp series.

Titled The Beads, the series features examples of the fine beadwork for which South African crafters are internationally renowned, and was snapped by German-born photographer Sasha Lipka, now resident in Pretoria.

All featured items are held in the collection of the Iziko South African National Gallery and the Iziko Social History Collections, which works to raise awareness of South Africa’s rich cultural heritage.

Head of Sapo’s Philatelic Services, Johan van Wyk, said the series portrays examples of culturally important objects. Both modern and traditional items can be seen, including a traditional Tsonga fertility figure, a necklace made of lions’ claws, and a mobile phone rendered in bead- and wirework.

According to National Gallery curator Carol Kaufman, beadwork is as significant in local culture as wood carving is in other African countries.

“These stamps will spread awareness of these cultural treasures all over South Africa, and the rest of the world, at an affordable cost,” she said.

Instead of showing the entire item, in many cases just a portion of the intricate work is visible, which allows for greater detail.

Besides the usual denominations, stamps have also been issued for certain standard formats such as registered letters or international letters. These stamps are not marked with a value and can be used even if the cost of postage goes up.

The stamps are available from any post office in South Africa.  International stamp collectors can order them by sending email to sa.stamps@postoffice.co.za. Sapo will produce the beads series for five years.

In another postal first for South Africa, Philatelic Services and an army of volunteers have built an immense stamp mosaic of the Pretoria skyline. The mosaic is now under evaluation by the Guinness World Records organisation to see if it is eligible to break the current record held by Germany’s Leipzig International School.

Leipzig established its Guinness world record in 2008 by constructing a mosaic of the city skyline, measuring 100 square metres and containing about 115 000 stamps.

The local version contains about 201 000 stamps. Covering an area of 160 square meters, it took the participants weeks to construct. It features the Union Buildings, seat of South Africa’s government, the six-colour national flag, and the century-old Church Square post office, which is a national heritage site.

By making the record-breaking mosaic 60% bigger than the previous version, Sapo hopes to fend off attempts to surpass the achievement for some time.

“Stamps communicate our heritage, our culture, our infrastructure and our achievements,” said Van Wyk, “and this mosaic will put a stamp on our greatness as a country.”

Philatelic Services has had a busy year – on 11 June, the opening day of the 2010 Fifa World Cup, the department issued two sets of Fifa-approved commemorative stamps and a number of covers to mark the football extravaganza.

The set depicting the trophy, official match ball and 2010 World Cup logo were football-shaped while the Zakumi series, featuring the tournament’s green-haired mascot, took the more conventional rectangular shape. Envelopes were franked with a special football stamp and contained an information card.

According to Van Wyk, the stamps and covers were in huge demand, and served as an inexpensive souvenir of the World Cup.

“We think of stamps as the smallest ambassadors of our country,” he said.

• Coining it for Madiba’s 90th 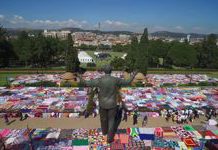 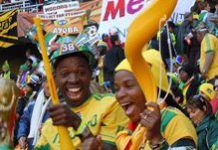