Twenty-six-year-old Thando Mgqolozana
made his literary debut at this year’s
festival with his novel, A man; who is not
a man. 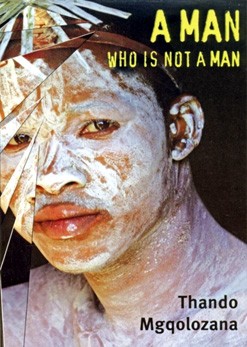 Mgqolozana’s work challenges the
practices of male circumcision in the
Xhosa culture.

Writers took to the streets in Grahamstown on 7 July as part of Wordfest, the literary programme at the National Arts Festival that seeks to highlight the need for the proper development of a reading culture in South Africa.

The 200 writers who gathered outside the Wordfest venue at Rhodes University in the town were also there to protest against the poor state of reading levels in South Africa.

The initiative was supported by a number of prominent people in the literary programme, including the convener of Wordfest and professor of poetry at Rhodes University Chris Mann, and Sports, Recreation, Arts and Culture MEC Xoliswa Tom, who launched event.

This year’s programme will include lectures from academics, readings from authors, book launches and poetry recitals.

The book chain store Exclusive Books has also set up a small shop at the venue.

The opening keynote address was delivered by award-winning author Mandla Langa, whose latest novel, Colours of the Chameleon, recently won the Commonwealth Prize for Literature in the Africa region.

Langa spoke about the struggles that South Africans have had to overcome, focusing specifically on his own childhood, growing up in the township of Umlazi in KwaZulu-Natal province. As a child he was unaware that the Bantu education, as it was referred to during apartheid, he was receiving was of a much lower standard than that of white students in the country.

But, despite the social difficulties of growing up in a township, Langa recalls how he immersed himself in books and reading.

His love of reading exposed him to poets and authors within his own community. He was groomed by late legendary South African poet Mafika Gwala. He recalled how seeing his first published poem in a literary journal moved him.

“When, some years later, one of my poems was published in a magazine, Ophir, edited by Peter Horn and Robert MacNamara, I was over the moon.

“I remember going around, getting free drinks in shebeens [home taverns], this boy who’s got a poem published in a real magazine, alongside names of white people, no less. That’s when, to put it mildly, my troubles started. I had found a role that would define me.”

But Langa’s elation didn’t last after enrolling in the University of Fort Hare’s English programme.

According to Langa, his English lecturer frequently and openly told him, and his fellow black students, that they would never pass “his English”. This did not deter Langa, who went on to finish his degree.

Going into exile in the late 1970s, he lived in various countries including Nigeria. During a theatre production based on the infamous 16 June 1976 Soweto uprising, by students from the University of Ibadan, Langa was painfully reminded of his homesickness and the conflicts in his home country.

“I remember that, as soon as the students’ performance got to the enactment of the Hector Pieterson shooting, the soldier standing next to me, who was a big man, started weeping uncontrollably.

“I also wept. I wept for my country, for the fact that we were thousands of miles from home. In those years it was difficult to think of the possibility of apartheid’s end.”

Langa’s speech centred on the need for South Africans to move forward, not to be stuck in one particular era, but also not to forget what had happened in South Africa at the time. He used the metaphor of walking, which he says also inspired former president Nelson Mandela’s autobiography, Long Walk to Freedom.

“Nelson Mandela’s journey in Long Walk to Freedom mirrors the efforts to raise up black American slaves through education by Booker T Washington, who wrote Up From Slavery, another form of walking – it’s less about the physical activity of walking than about attitude; an attitude that, granted, derives its inspiration from walking.”

Also launched at the festival was the controversial book by first-time writer, 26-year-old Thando Mgqolozana. His novel, A man; who is not a man, published by the University of KwaZulu-Natal, challenges the practices of male circumcision in the Xhosa culture.

During his opening address, the young Eastern Cape writer spoke about his own experience with circumcision. He said that it is difficult for him to see what was once a proud ritual to usher boys into manhood, become a thorny issue veiled in silence in his community.

“I felt the need to break the silence and publish this book because the fear is no longer. I wanted to start a debate on this issue, and lift the veil of secrecy around the issue of the death of initiates.”

A number of Xhosa traditionalists attended the launch as the topic of male circumcision has long been regarded as an exclusively male issue, and could not be addressed in a public forum including women.

Mgqolozana said he was prepared to field tough questions from Xhosa traditionalists, who may have been offended by the book. Instead, he was met with an unexpected amount of support from the audience. He said he was touched by the encouragement from, especially, elder males who, in acknowledging the sacredness of the practice, felt that the writer had taken a leap of faith in openly addressing it.

The issue of male circumcision has been a hot topic in the South African media as a number of young men have died due to alleged medical complications. The South African Press Association reported on 7 July 2009 that a 37th Eastern Cape man died after an initiation ritual. The youths, most of them between the ages of 13 and 22, died after undergoing the traditional practice at illegal initiation schools.

“You are brave because us man folk don’t talk about such things in front of women folk. But it is good for you to talk about it, because when tradition changes and it results in death, that’s a problem,” said one attendee during the question-and-answer session.

“Now is the time for the custom to be transformed. How many deaths must we witness until we do something about it?” asked another attendee.

Mgqolozana criticised the House of Traditional Leaders, a body set up by government to deal with traditional issues, whom he says has failed to protect the age-old practice.

“They have failed us. The government has tried to come up with legislative laws to try and govern practices around male circumcision. However, the House of the Traditional Leaders has rejected the promulgation of this Act.”

Mgqolozana was referring to the Children’s Act number 38 of 2005, which also includes a section on male circumcision.

According to the law, males under the age of 16 may not be circumcised, unless:

Mgqolozana says he hopes the book will encourage young and old to open up, as well as integrate women into the conversation, as many mothers are losing their children.

“This book doesn’t really have a target audience, but I hope that people who practise male circumcision will read this book.

“I’m hoping that the fathers will get my argument, and that the mothers will finally know the secrets of circumcision as they deserve to know what is happening.”

The young writer says his mother, though, has been a tough one to convince, “She read the book overnight and she sms’d me the next morning and she said ‘this is really a work of fiction’.”

Wordfest will continue at the National Arts Festival until 10 July.