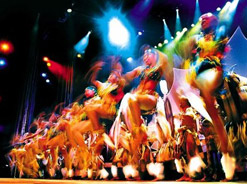 The cast of Umoja, South Africa’s
international hit musical, in action on
stage. The people of Soweto will soon be
able to enjoy shows like this close to
home, with the construction of the
township’s first world-class theatre.
(Image: Umoja)

Once known for dusty streets, poverty and antiapartheid resistance, South Africa’s largest and best-known township of Soweto is taking on a distinctly middle-class air. The city of Johannesburg has invested millions in upgrading infrastructure, and the private sector has stepped in with investments in new shopping malls, nightclubs and restaurants.

Now the township’s gentrification has taken a step further, with the launch of Soweto’s first multimillion-rand state-of-the-art theatre.

Construction of the R110-million (US$10-million) theatre will begin in March this year. The venue is scheduled to open in 2012.

In his address at the recent sod-turning ceremony, Johannesburg executive mayor Amos Masondo said the construction of the theatre is an important world-class development for Soweto.

“It is an important part of transforming Soweto from a mere dormitory into a normal neighbourhood,” Masondo said.

He pointed out that although the love for theatre is growing fairly rapidly among all sectors of the South African population, many people still perceive theatre as something reserved for the elite.

“We are striving to change Soweto into a sustainable human settlement that is known not just as a place where people come from, but where people also go,” he said. The new theatre will bring a larger variety of entertainment to the greater Soweto community.

The theatre is one of the 2010 legacy projects identified by the city to ensure that Johannesburg continues to benefit from the 2010 World Cup long after the event is over.

“When the soccer spectacle has come and gone there must be something of value for all to see and point at,” Masondo said.

The Soweto theatre will be located in the high-density, mixed-use Jabulani central business district development. The development will include the existing Jabulani Amphitheatre (which will be refurbished), parkland, public art and other amenities.

It will have a 420-seater main venue with an end stage, wings, orchestra pit, fly tower and buttress, two smaller 80 and 90-seater “black box” venues, an indoor foyer area, multi-level change rooms, storage rooms, a “green room”, and an outdoor covered plaza (which will serve as an additional informal performing space). Apart from theatre, music, dance and choir productions, it could also be used for festivals, conferences and meetings.

The new development will also create hundreds of much-needed jobs. Masondo said that in the construction phase various contractors will be required and once it is complete, there will be a need to employ people to maintain and manage the facility. Furthermore, actors, musicians, dancers, directors and singers will also be employed on an ongoing basis.

About R1-billion ($100-million) has been set aside for other legacy projects, which include an indoor sports centre in Orlando and upgrading and replacing street furniture in the inner city.