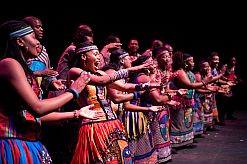 The Soweto Gospel Choir are known and
loved for their exuberant performances.
(Image: University of California Santa
Barbara, Arts and Lectures) 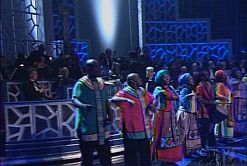 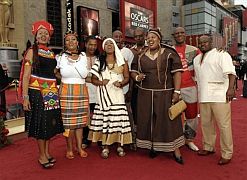 Members of the choir on the red carpet
at the 81st Academy Awards.
(Image: Soweto Gospel Fans) 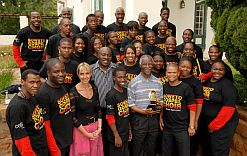 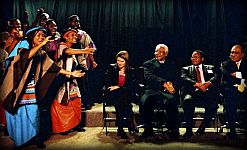 The Grammy-winning Soweto Gospel Choir added another notch to their collective belt by wowing the audience at the 81st Academy Awards. The multi-award-winning group performed their Oscar-nominated song Down to Earth from Disney’s animated hit film Wall-E.

“Down to Earth” was one of three nominees for Best Original Song and was up against renowned composer AR Rahman’s “O Saya” and “Jai Ho”, both taken from the film Slumdog Millionaire. Vikas Swarup, author of Q&A, on which the film was based, currently works in Pretoria as India’s Deputy High Commissioner to South Africa.

“Jai Ho” was the winner on the night, while Slumdog Millionaire itself bagged a massive haul of eight statuettes, including Best Director, Best Picture, Best Cinematography and Best Score. Wall-E won the Oscar for Best Animated Feature Film.

The pride of the local choral scene made history by becoming the first South African musical act ever to receive an invitation to perform at the Oscars. The ceremony, arguably the world’s greatest showbiz event, took place on 22 February and was broadcast in 53 countries.

The choir’s executive producer, Beverly Bryer, was ecstatic. “This is an unbelievable accolade,” she enthused. “They have achieved so much since the start of their musical journey, but being on stage and singing before a worldwide audience, at the most prestigious of all awards ceremonies, is an honour they will always treasure.”

The choir recorded “Down to Earth” with famous musician and humanitarian Peter Gabriel, but performed it at the awards ceremony with six-time Grammy winner, John Legend.

Gabriel withdrew from participating at the Oscars as a gesture of protest, after he was informed that the three nominated songs would be presented as a medley and that the audience would be treated to just a portion of “Down to Earth”. The singer said he didn’t feel that the allotted 65 seconds was enough time to properly showcase the song. Nonetheless even in that short time the choir managed to leave their mark on the Academy Awards audience.

In February 2009, at the latest edition of the Grammy Awards, “Down to Earth” scooped the award for Best Motion Picture Song.

From humble beginnings at home, the Soweto Gospel Choir has risen to become an international sensation. Considering that they have been together for just seven years, they have notched up a number of remarkable achievements, including two Grammy awards and performances with Gabriel, Bono, Queen, Celine Dion, Annie Lennox, and the Red Hot Chilli Peppers, among others.

The Soweto Gospel Choir, which sings in six of South Africa’s 11 official languages, was formed in 2002 by Bryer and choirmaster David Mulovhedzi and was drawn from church and community singing groups in the Soweto area.

The group sings traditional and contemporary music and has won accolades from many countries, including an Australian Helpmann Award in 2003, an American Gospel Music Award in the same year, and three Grammy nominations. They have appeared on high-profile television shows such as The Tonight Show with Jay Leno and Late Night with Conan O’Brien.

The choir’s debut album Voices from Heaven topped the Billboard world music charts. Their follow-up release Blessed followed suit, and both it and the third album, African Spirit, won Grammys in 2007 and 2008 respectively for Best Traditional World Music Album.

The Soweto Gospel Choir received its third Grammy nomination in 2009 but failed to make it three in a row. However, fellow nominees Ladysmith Black Mambazo walked off with the Best Traditional World Music Album award for their latest release Ilembe: Honouring Shaka Zulu.

Supporting those in need

A very important aspect of the Soweto Gospel Choir’s mission is to raise funds for its own Aids orphans foundation Vukani, established in 2004. Vukani (isiZulu, meaning “wake up”) has adopted Nkosi’s Haven, a long-term refuge for mothers suffering from Aids and their children, as well as those already orphaned.

Nkosi’s Haven was named after the extraordinary child activist Nkosi Johnson, who was born HIV-positive and died of Aids in 2001 at the age of 12. The group gives 50% of all donations to the haven, according to Bryer, and to date has raised well over R3-million for the cause. The remaining 50% is shared amongst other needy organisations.

“That’s very important to us,” said Mulovhedzi. “We feel proud we are doing something and not just singing.”

As ambassadors for Nelson Mandela’s Aids awareness 46664 organisation, they continue to support those desperately in need. “Being 46664 ambassadors has given them the chance to travel and meet other ambassadors around the world,” commented Bryer. “It is their pride and joy.”