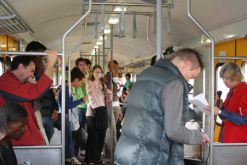 All aboard for education. 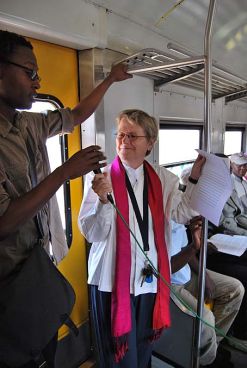 Professor Isabel Hofmeyr in discussion
with a commuter on a train to Soweto.
Sermon on a Train encourages dialogue
between the lecturer and the audience.
(Images: Sermon on the Train)

Sowetan commuters are being given a taste of university education, with top South African academics giving free lectures on trains as part of the Sermon on the Train art project.

The initiative takes up the old South African tradition of public preaching on trains in a different way, and aims to challenge the concept the “public lecture”.

Final-year fine arts students Molemo Moiloa and Nare Mokgotho from the University of the Witwatersrand (Wits) in central Johannesburg started the project in early 2009 with academics from the university. The idea was that, while universities do occasionally give lectures open to the general public, these are not public enough.

“Ordinary members of the public do not form part of the group of individuals that attend university public lectures,” said Mokgotho. “Hence, the sermon seeks to bring an exchange between the creative community and greater society.”

Moiloa said Sermon on the Train began as a once-off art project for their degree. “Since then the project has taken on a life of its own,” she said. “Though we are still graded on the project, it has a greater public significance that has become separate to our degrees.”

The sermons take place in the late afternoon, targeting workers returning home from work. They begin at Park Station in the city centre, where commuters board the train, and end in Soweto in the southwest of Johannesburg. Audiences are encouraged to ask questions and discuss issues with the lecturer, creating the opportunity for dialogue and the exchange of knowledge.

The project kicked off in March, with the first lecture was given by Professor Anitra Nettleton, head of History of Art at Wits. On a train trip to Dube in Soweto, she spoke on the topic “Meditations on the African Avant Garde”.

“The sermons serve as a critique of public access to information and the isolation and elitism often endemic in tertiary institution – particularly in relation to ordinary members of the public,” said Moiloa.

The first sermon was well received by the audience, to the relief of the organisers and lecturer. Soon other academics approached Moiloa and Nare Mokgotho, offering to do sermons.

The second sermon was delivered by Wits architecture lecturer Professor Kirsten Doermann on a train to Orlando Station in Soweto in August. She read from a lecture by the radical avant-garde Greek architect Elia Zenghelis, dealing with democracy, urbanisation, globalisation and the role of the architect.

Despite the seemingly daunting topic, the sermon set off critical discussion between the students, lecturers and commuters, confirming Moiloa and Mokgotho’s view that the initiative would encourage dialogue.

In October award-winning writer and academic Professor Isabel Hofmeyr from the Wits School of Literature and Language Studies presented the third sermon, called “Revelations”, on the train to Phomolong, Soweto.

Discussing African and Indian literature, Hofmeyr spoke of the birth of a new world power order, with the Indian Ocean as the central point of orientation. She handed out printed copies of the sermon to all commuters, which many read from top to bottom.

Mokgotho said their art had been about “re-observation and the defamiliarisation” of the everyday – questioning the way people saw the world and finding the aesthetic in the simple.

More than this, according to the students, Sermon on the Train aims to raise questions about access, social divisions and the stereotypes that get entrenched by keeping people separate. The work also chips away at the hierarchy that separates students from lectures by encouraging lecturer-student collaborations.

The university continues to provide resources to allow the project to grow further. “We have received major support,” Moiloa. “The university has sponsored the last two sermons because they feel it makes strides in some of the objectives of the university itself. This has resulted in a workshop and tutorial information packs we give out on the trains.”

Some have argued that having a public lecture in a public space is imposing on that public. But Moiloa and Mokgotho believe it is no different to other performances such as public preaching, and are set to continue their journey.