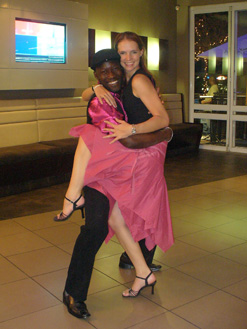 On the dance floor at Salsa Spirit.

After 15 years of democracy, most South Africans of the idealised “Rainbow Nation” still live largely separate lives, primarily because of economic inequality and the legacy of apartheid residential rules that kept population groups apart for decades. Most of them worship with their kin, many schools are composed of students of mostly of the same hue, and sporting events attract different groups.

People also tend to socialise among their own – going to coloured or Indian parties with no hint of apology. Other groups are welcome at these parties, but the prominent group wants to party to celebrate its cultural and ethnic traditions.

One exception is salsa dancing.

In Johannesburg, salsa is a steadily growing phenomenon that brings together a diverse group of people who otherwise have little in common. In a city that still parties along defined lines of culture and ethnicity, salsa is a common denominator for people who share nothing but their love of the dance.

Around the world, salsa is a small underground phenomenon with fanatical following. Among the general public it may be better known than rave parties or Gothic rock, but not by much.  Yet salsa and its culture have been slowly gaining ground for the past several decades; you can find salsa clubs in any world-class city worth its salt. From London to Dubai, from Miami to Sydney, you can dance with like-minded souls almost every night of the week.

Salsa is a secret and instantaneous passport into an unfamiliar city, where you can walk into a club and start dancing with anyone without hesitation. You don’t even need to speak the local language. Whether in Tokyo or Shanghai, salseros are conversant in the common language of this Latin dance that sprang from the barrios of Cuba, Columbia and the Dominican Republic.

Some might consider salsa a silly, frivolous pastime, especially for those over 35 who still retain the dancing bug. But salsa lovers say that is precisely why they love it. The music seeps into their bones. They hold their heads high. Their chests are puffed out like the front of a Volkswagen. They usually sport a sly smile that seems to shout, “I’m having the time of my life!” Many testify to the therapeutic values of dancing, saying it’s impossible to dance salsa and be depressed at the same time.

In Johannesburg, the salsa scene revolves around five instructors from diverse backgrounds, all with a loyal following.

Salsa is so addictive that people who can’t spend 10 minutes on a treadmill at the gym will go for hours on the dance floor.

About  60% or more of salsa students are female, a ratio that is similar around the world. Most women appear to be biologically wired to love salsa. When the music starts playing, they appear almost helpless in their attraction to the beat. Most guys are terrified they will make a fool of themselves on the dance floor and stay clear. But the few brave souls who stick with it become dedicated, invariably sharing their female partners’ addiction.