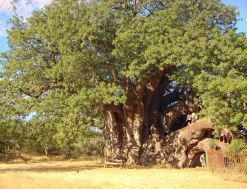 The magnificent Sagole baobab is the largest of its kind in the country and is located in the far north of Limpopo Province. 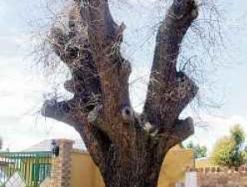 The 100 year old Sophiatown oak that resided in Bertha Street was the first to be declared a Champion tree. 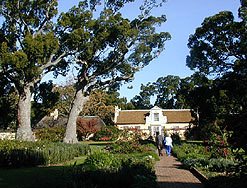 Camphor trees are the oldest living, officially documented trees on the sub-continent. Native to Taiwan, southern Japan, southeast China and Indochina, they were first introduced to the Cape from China and Japan around 1670. 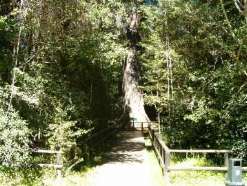 A yellowwood tree in Knysna – the yellowwood family is primeval and has been present in South Africa for more than 100-million years.
(Images: DAFF)

South Africa is home to more than 1 700 indigenous species of trees and shrubs, some of which are threatened because of their rarity as well as the pressure of commercial and subsistence use.

Currently, more than 70 trees and groups of trees have been declared by the Department of Agriculture, Forestry and Fisheries (DAFF) as national Champion trees, which means they are fully protected under the National Forests Act of 1998.

Under the declaration, tree species listed as protected may not be cut, disturbed or damaged and their products may not be owned, transported, exported or sold without a license.  Once a tree is listed as a Champion, all trees of the species fall under the protection of the Act.

“Listing certain species as protected is not primarily aimed at preventing the use of a tree species, but to ensure sustainable use through licensing control measures,” says Izak van der Merwe, Champion tree coordinator.

According to DAFF, such projects have been established in several countries, but this is the first of its kind in Africa.

The Champion tree project of South Africa aims to list and protect trees of national conservation significance. The project over the years has been about raising awareness for the national tree heritage, and to promote it as an asset for tourism.

The first tree to be declared as protected under the Act in 2003 was an English oak tree (Quercus robur) in Sophiatown in Johannesburg. Estimated to be over a century old, it was the only relic and landmark of the days before the residents were forcibly relocated and the town was turned into a whites-only suburb under apartheid.

The tree is of cultural significance because it was under its leafy branches that residents and political activists used to gather for meetings.

The Sophiatown oak tree was visible from several street blocks away, with a trunk girth of 4.48m and a crown diameter of more than 30m. The Act was materialised as an attempt to stop the destruction of the tree by a property owner. The tree fell down in 2008 but its trunk can be seen at the Trevor Huddlestone Centre.

Other Champion trees include two massive Australian Moreton Bay fig trees (Ficus macrophylla), one standing on the campus of the University of Cape Town and the other inside the Pretoria Zoological Gardens. Both these trees have a crown diameter of more than 40m, and trunk circumference of more than 16m and 9m respectively.

In the Goudveld Forest near Knysna, Western Cape, one of the more recent Champions has been renamed the Dalene Matthee Big Tree, as a tribute to the author who wrote a best-seller series of historic novels about life in the forests in the 19th century. Previously known as the Krisjan se Nek Big Tree, this Outeniqua yellowwood (Podocarpus falcatus), is nearly 900 years old and stands 40m tall.

The 1 000-year-old Wonderboom Wild Fig tree (Ficus salicifolia), located in Pretoria, has the largest crown of all the champion trees with a diameter of 61m, while in Limpopo stands the largest indigenous tree in South Africa – the Sagole baobab tree (Adansonia digitata) – with a trunk circumference of more than 33m.

The Twin Giants of Woodbush State Forest in Magoebaskloof, Limpopo, are the tallest of the lofty Saligna blue gum trees (Eucalyptus saligna), and were measured by professional tree climbers in 2008. At a height of 79m, they tower above a 26-storey block of flats. Planted in 1926, they are the tallest trees in Africa, and according to the DAFF, the tallest of the species anywhere in the world.

“The most outstanding find among the indigenous trees is a Lowveld cabbage tree (Cussonia spicata) towering above the canopy of a natural forest at the Kurisa Moya Nature Lodge near Magoebaskloof,” explains Van der Merwe. This tree is about 35m tall and has a trunk circumference of 11.6m. Another indigenous tree that has to be seen to be believed is a baobab on the farm Swartwater in Limpopo. This tree has a trunk circumference of 24.5m.

The tallest indigenous tree on the list is an Outeniqua yellowwood of about 41m high, growing in the forests of the Blouberg Mountains in Limpopo. However, the Outeniqua yellowwoods of the Knysna forests draw many visitors, such as the Tsitsikamma Big Tree, which receives more than 80 000 visitors a year.

“Exotic tree species introduced from other parts of the world tend to dominate the Champion tree list, with eucalypt species topping the list in terms of size,” says Van der Merwe. “Many of these trees attain heights of more than 50m, such as a group of newly listed eucalypts of various species in the KwaZulu-Natal Botanical Gardens.”

According to Van der Merwe, pine trees seldom attain such heights, but a Loblolly pine (Pinus taeda) discovered on the Buffelsnek Forest Estate near Knysna by tree climber Leon Visser, just about topped the 60m mark. A group of false Weymouth pine trees (Pinus pseudostrobus) was also added to the list, growing about 50m tall and sporting trunk circumferences up to 4.93m.

Nominating trees to be protected

Anyone can nominate indigenous or non-indigenous trees for Champion status. According to Van der Merwe, trees can be listed according to size criteria like height and trunk circumference, or according to value criteria such as historic value and age.

The nomination cycle starts on 1 August of each year, and ends on 31 July the following year; thereafter the nominated trees are assessed by a panel of experts. This panel assists DAFF with the shortlisting of trees, which are then published for comment, and finally declared as protected.

A team of international tree climbers arrived in South Africa on 4 January for a month-long expedition to climb Champion trees throughout the country. The aim of this expedition is to climb about 20 of the largest and oldest Champion trees.

They include several venerable yellowwood trees towering above the canopy of the Knysna forests, giant baobabs such as the iconic Sagole tree in Vendaland, the Three Queens trio of Matumi trees (Breonadia salicina) at Amorentia Estate near Tzaneen, and the tallest tree in Africa, one of the Twin Giants of Woodbush State Forest.

Like rock climbing, tree climbing is a potentially dangerous pastime practised by a small and adventurous group of people, and it has caught on in South Africa too.

Local tree climbing enthusiasts like Visser will join the expedition on some of the climbs. Stellenbosch resident Visser has in the past assisted DAFF to measure the height of very tall Champion trees that cannot be reliably measured with instruments.

“Tree climbers have an ambition to climb the biggest and the oldest trees, and height is not always the defining criterion,” says Van der Merwe. The Sagole baobab is only 22m tall, but a mathematic size formula determines it as the largest indigenous tree in the country on the basis of its enormous 33m trunk circumference.

Apart from ticking off the largest trees on their tree climbing list, the team also hopes to raise awareness of trees and the need to protect the tree heritage. DAFF and the local Dendrological Society assisted with organising the tree climbing expedition, and obtaining the necessary approval of various land owners and conservation authorities.