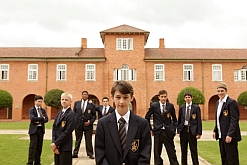 Spud and his Crazy 8 gang. 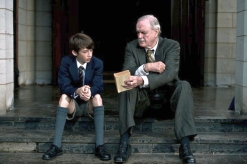 The Guv and Spud share a moment.
(Images: Spud: The Movie)

Based on the best-selling book series by John van de Ruit, Spud: The Movie hits the South African circuit on 3 December 2010 and is billed as a film not to be missed.

The first Spud novel became an instant hit, breaking all South African publishing records in 2005, and recently came in as number 11 on Exclusive Books’ list of 101 Books to Read Before You Die.

Two more Spuds have followed since then, with another one in the pipeline.

The first book sold over 200 000 copies, with an estimated readership of 600 000 in South Africa alone. It launched internationally in 2007 to great acclaim and has been published in the US, Italy, Russia, Brazil, the UK, India, and other Commonwealth countries.

The film, which is set to launch internationally in February 2011, was produced by Cape Town-based Rogue Star Films and BLM Productions in Durban, and premiered at selected cinemas in November.

The 13-year-old John Milton wins a cricket scholarship and enrolls at Michaelhouse, a prestigious all-boys boarding school where author Van de Ruit spent his secondary school years, in the year 1990.

With Nelson Mandela’s release imminent, this is a time of change for his country as well as for the boy. The school, and his odd new assortment of friends, prove to be daunting and challenging.

Milton is nicknamed Spud because of his late development, but despite this unfortunate situation he manages to attract the attention of the opposite sex. Dealing with strange emotions causes a few awkward moments and results in hard decisions.

An only child who suffers from dysfunctional middle class parents, a senile granny and a domestic worker who has more sense than his parents, Spud faces some embarrassing but hilarious situations.

Fresh from his role as young Logan in the blockbuster X-Men Origins: Wolverine, 14-year-old Troye Sivan, South African-born and now living in Australia, plays the title role. His experience as Oliver in a theatre production proved useful as Spud lands the lead role in the school production of Oliver under the guidance of the burly Viking, his drama teacher.

His friends, known as The Crazy 8, run the gamut from the subdued to gregarious, with names like Mad Dog, Boggo, Gecko, Rambo and Fatty. We are led through the fast-paced trials of teenage boys and the mischievous stunts they perform.

The role of the Guv, a cantankerous and eccentric English teacher, was given to none other than British film veteran John Cleese, who is perfectly cast. The Guv soon spots Spud’s talent for writing and recognises something of himself in the lad. A bond forms between the two and they share memorable lunchtimes discussing women while the Guv consumes copious quantities of wine.

In an interview Cleese said that he thoroughly enjoyed working on Spud and would do it again if the producers decide on a sequel.

“The last time that I saw a script that I liked as much as this was in 1995 for Clockwise,” he said.

The rest of the cast is drawn from local talent. All but one of the Crazy 8 gang are pupils from local schools, and the eighth is studying for a degree in theatre and performance at Cape Town University.

Lehasa Moloi plays PJ Luthuli, the head of house, who commands respect and is Spud’s hero figure. Luthuli is aware of the political significance of the goings-on around him and helps Spud to see the darker side of South African history.

Adaptation of the novel for the big screen began in 2008 when Rogue Star Films founder Ross Garland brought writer/director Donovan Marsh onto the project. The team has worked closely with Van de Ruit, which has helped them to keep the high-paced script true to the story of Spud.

Films like Neill Blomkamp’s Oscar-nominated District 9, Regardt van den Berg’s Faith Like Potatoes and Jann Turner’s White Wedding have been received well locally and internationally, showing that the calibre of the filmmaking industry is on the up.

Spud and White Wedding both show that South Africans have the ability to laugh at themselves in an easy manner and are able to see the humorous side to life in most respects.

With world-class crew and production companies, and local talent such as Troye Sivan, Sharlto Copley, Rapulana Seiphemo, Arnold Vosloo and Frank Rautenbach, South Africa’s film sector is proving to be competitive and more in demand than ever before.