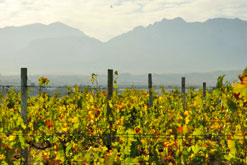 Talented sommeliers from around the
world will visit the Western Cape’s wine
region to battle it out for the top spot in
October 2010.
(Image: Rodger Bosch,
MediaClubSouthAfrica.com. For more
free photos, visit the image library.)

The Wines of (Wosa) Sommelier World Cup kicked off in March, with country rounds taking place between March and June 2010 prior to the grand finale later in the year.

The competition is aimed at celebrating the historic first-ever African Fifa World Cup, and at promoting the sommelier as a career choice in .

Twelve countries will show off the skills of their wine professionals through a series of stages modelled around the 2010 Fifa World Cup.

Once the gruelling preliminaries have been decided and the finalists named, countries will move on to the taxing last round and, hopefully, glory.

The host country will show off its flourishing wine and wine tourism industries, treating the visitors to a week-long, all expenses paid tour of the region. Finalists can look forward to a unique wine experience.

Only those already employed at a hotel or restaurant in one of the competing countries are eligible for entry. Registration is now open online through the competition’s website.

The semi-finals take place in each of the competing countries from March to June, culminating in the last semi-final that coincides with the world’s biggest football tournament, which plays out from 11 June to 11 July.

Semi-finalists are in for a tough time, with a written as well as a practical tasting test on the cards. But the day promises to unfold in a festive spirit, from the warm-up (player registration) to the kick-off, first half (blind tasting of six wines), second half (the country’s game plan for ultimate victory), and the final event, Laduma!, when the winner is announced.

The top sommelier will take his or her place in the final squad in for an intensive week-long tour of the winelands, a popular tourist attraction. Here they will inspect some of the top wineries of the region, consult with experienced winemakers and gain practical knowledge of the famed culinary bounty on offer through fine wining and dining.

The final round takes much the same format as the semi-final, with the addition of the hat-trick, or announcement of the top three, and penalty shoot-out, where the three compete before a live audience.

In budding sommeliers don’t have many options for training. Andre Morgenthal of Wosa says there is no formal internationally accredited diploma course, such as the ones available overseas, but this is because there is not yet enough demand.

The Cape Wine Academy offers the qualification at both its Stellenbosch and training centres. The course comprises seven modules, adding up to a total of 105 learning hours. There is also a three-year practical experience requirement before the certificate is issued.

Hospitality training company Let’s Sell Lobster runs a Wine Advisors School that offers a number of in-depth wine adviser courses to help people in the trade improve their knowledge of wine, especially in terms of assisting and serving guests.

Originally from , internationally qualified sommelier Jörg Pfützner is responsible for training. Pfützner currently works in as sommelier at Aubergine restaurant, one of the top establishments in the country.

The school says that although South Africa has few sommeliers who can match up to international standards, its wine advisor course is a start, and will form the foundation of the future pool of top-notch wine professionals.