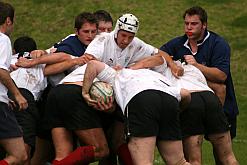 480 social rugby players from around the
world will converge on Cape Town in June
2009 for the inaugural world championship.
(Image: Social Rugby World Championship) 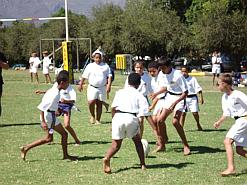 South Africa hosts the world’s first social rugby tournament in Cape Town in June 2009. The event is aimed at those players for whom the sport is more of an abiding passion than a high-paying job, and already numerous social rugby teams from as far afield as New Zealand, Australia, Hong Kong, Catalonia and the US have signed up.

The principle behind the social rugby tournament is to give enthusiasts who play the game at a social level, mostly those between the ages of 18 and 39, a chance to play their chosen sport in a competitive yet friendly environment and to enjoy the camaraderie associated with a team sport.

The tournament will coincide with the Confederations Cup of football and the highly anticipated South African tour by the British and Irish Lions. But fans will be entertained by far more than just the British Lions’ attempt at revenge for their 6-42 humiliation in November 2008 at the hands (and boots) of current world champions, the South African Springboks.

The action will take place at Brookside, home to Cape Town’s 132-year-old Villagers rugby club. Sixteen teams will play 40 matches in a round robin format over the first five days before going into the semi-final and final stages to decide the winners of the Cup, Plate, Bowl and Shield trophies.

So far South Africa is represented by the Galetti Fourths, based at Villagers, their bitter rivals the Shebeen Boys also from Cape Town, and the Old Boys Fourths from Durban.

According to the official Social Rugby Tournament website, the 2007 Rugby World Cup held in France attracted a record television audience of 4.2-billion, while live events were attended by over 2.2-million sports fans.

But the game has become increasingly specialised and time-intensive, say the organisers and mid-level or club rugby players don’t get enough opportunities to just play for fun any more. And while professional rugby is gaining a bigger worldwide audience and new countries are taking up the sport every year, there was no international competitive outlet for those who play for fun.

Until now! Former advertising executives Rolf Fitschen and Graham Lindemann, the driving force behind the inaugural social rugby tournament, are looking forward to the kick-off. With 20 years of professional experience behind them, the two created BigFish Sports Productions especially to run the event, after identifying a need for a tournament run on a social level. Fitschen and Lindemann are both convinced that this is just the start of great things.

“Professionalism has changed what rugby is, has killed the spirit,” said Fitschen, speaking to Planet Rugby. “Teams pitch up, earn their wages, and then disappear in sponsored cars to do their own thing. The first team of a club is never an ambassadorial body any more.”

The tournament’s motto – For the Love of Rugby – proclaims their intention to kick ruthless ambition into touch and to revive that spirit. “This is the gap in the current rugby climate,” said Fitchen. “If a player ends up unable to play, or does not aspire to play professionally, there should be more of this on offer.”

But the informality of the tournament doesn’t mean that any old standard will be accepted. “We won’t turn anyone away,” said Lindermann, “but this is not really a tournament for old crock teams. This is a tournament for young-ish people who would be of active professional playing age, but are not of that aptitude.” He added that while old crocks are still more than welcome, they may find themselves up against 15 teenagers.

Former Springbok captain Corné Krige has thrown his considerable weight behind the event, saying, “The majority of rugby isn’t played at first team or provincial level. For these guys rugby isn’t a job, it’s a passion. Every weekend, for no payment or stadiums filled with 40 000 cheering fans, these okes [chaps] go out there and give it their all, just because they love the game.”

Not only will the tournament attract a multitude of visitors to Cape Town – recognised as one of the world’s premier destinations – but there is an outreach programme which will give teams the chance to engage with local communities by hosting coaching clinics for enthusiastic youngsters. They will also visit the Learn to Earn initiative, which has partnered with black economic empowerment company Tag Rugby Promotions by providing skilled graduates from its sewing programme to manufacture Tag Rugby products.

And of course, visitors will not leave South Africa without experiencing two of the region’s prime attractions – the winelands and the spectacular Cape Peninsula – courtesy of the organisers, who have put together a few interesting tours to ensure that fans and players get the most from their visit.