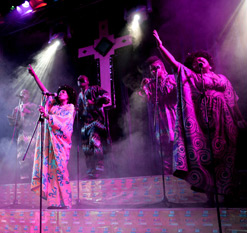 Acclaimed theatre-maker and director Brett Bailey has no interest in sport, he tells me, and while the 2010 Fifa World Cup is underway in he’ll be taking a break in the Himalayas. “My first holiday in many years.”

Nonetheless, it is no coincidence that the Market Theatre in Johannesburg is hosting his latest show, House of the Holy Afro, from 11 June to 11 July, from kick-off to the final whistle of the tournament. The Market, like most arts institutions across the country, wants to use the World Cup to showcase South Africa and Africa’s artistic talent to the thousands of overseas visitors – and attract local audiences looking for something more than footie.

But Bailey warns against the production of “commercial fodder” to meet the appetite for host country arts and culture – as, he feels, happened in in 2006. Certainly, his own contribution differs markedly from the productions other theatres are showing during the World Cup. But that is no surprise: Bailey’s work tends to go against the grain.

At last year’s National Arts Festival in the Eastern Cape university town of Grahamstown, his provocative site-specific performance/installation piece Blood Diamonds shocked many with its explicit critique of affluent white South Africans literally or metaphorically descended from the 1820 British settlers.

Bailey used to live in Grahamstown, but never liked it: “It’s dead quiet without the students, and during university terms it always seemed to me to be populated by privileged white kids from the Natal Midlands.” This discomfort lead him to research the Eastern Cape’s frontier history, during which established dominance over Xhosa, Griqua and Boer alike.

In Bailey’s view, the ongoing racial and economic divisions visible in cities like Grahamstown can be traced directly to the “colonising buffer” the settlers were imported from Britain to create.

“Somehow, in the popular consciousness of white South Africa,” he wrote in the Blood Diamonds director’s note, “the 1820 settlers have managed to retain a butter-wouldn’t-melt-in-the-mouth innocence. As if they were any less rapacious, opportunistic, violent and bigoted than other ‘civilizers’ … In Grahamstown the faces of black poverty and white wealth gaze at each other from opposing banks of a stinking stream as they have done for close on 200 years. The city starkly illustrates an elemental fracture in the South African soul.”

Much of Bailey’s work examines this fracture. In Ipi Zombi, iMumbo Jumbo and The Prophet – published collectively in 2003 as The Plays of Miracle and Wonder – he challenged “the Valium called political correctness” and “Western bigotry which denies other world-views” by affirming pointedly irrational aspects of African culture, including witchcraft, ghosts and prophecies.

Yet he also undermines attempts to essentialise . The House of the Holy Afro is billed as “Afro-kitsch”, conflating spiritual melodies from both gospel songs and shamanistic ceremonies with driving housebeats and the over-the-top club poetry of cross-dressing performer Odidi Mfenyana. While the show may seem to represent and Africa in front of a global audience – it has already toured widely in – it is a complex, perhaps even subversive, representation.

Bailey strongly resists the images of “foot-stomping, happy natives” that various internationally successful South African musicals have sold to audiences, images that don’t disturb people or push their buttons, but instead reinscribe the “folkloric picture of South Africa that we export to the globe”.

This is what Bailey calls “Afro-Disney”, a safe, sanitised Africa that has its negative twin in the association of Africa with war and poverty. He feels that they are two sides of the same coin, the result of mediated perceptions of – and the cause, in turn, of “hyper-politically correct” responses to some of his work, such as Big Dada, which explored the rise and fall of Ugandan dictator Idi Amin.

Bailey does not wish to glorify Africa, but to be self-critical. At the same time, he does not see his job as an artist as trying to solve problems. Rather, he aims to “make people aware of the sub-strata” and to “scratch beneath the surface, to find out what has been hidden”. This extends to work he produces primarily for European audiences, such as his recent Exhibit A, an indictment of German colonialism in when that country was called South West Africa.

Despite this desire to get Europeans to admit culpability in Africa, Bailey has identified the archetypal power of ancient European mythology – his Orfeus and Medeia, for example, made use of Greek myths as “clean, simple stories that have been in the human repertoire for so long that they have universal applicability”.

The rhythm, dancing, melody and spectacle of House of the Holy Afro no doubt also have global appeal. Theatre critic and scholar Daniel Larlham says Bailey’s work seems to be “split into two distinct currents: the dark theatrical strain and a strain of flashy entertainment”. House of the Holy Afro fits into the latter category – Bailey himself describes it as a party: “This show celebrates the jol.”

During the World Cup, locals and international visitors alike will be in festive mood and inclined to appreciate the nightclub atmosphere that is House of the Holy Afro. But audiences should bear in mind that dark theatrical strain if they really want to appreciate the artistry of Brett Bailey.