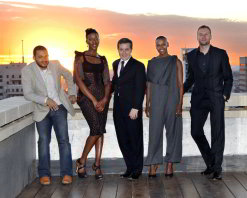 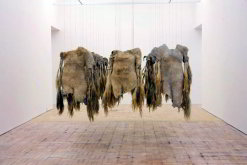 The striking art of Nandipha Mntambo
is created from cowhide.
(Image: The Volta Show)

For any South African feeling gloomy about the state of the nation, the plight of the continent, the receding world economy or any other anxiety-invoking subject, attending the annual Standard Bank Young Artist Awards ceremony should be prescribed as an antidote.

Now in its 27th year, this collection of awards acknowledges both the past achievements and future potential of artists under the age of 35 in the categories of visual arts, film, dance, drama, classical music and jazz.

Recipients are given a monetary prize, but perhaps more valuable is the platform that the awards provide for promoting each artist’s work; the awards have always been associated with the National Arts Festival in Grahamstown and the winners feature prominently in the annual festival programme.


The Young Artists for 2011, announced in late October, have a keen awareness of the prestige of the award.

Jazzman Bokani Dyer summed it up in his acceptance speech: “The previous winners are all musicians whom I admire and respect … so this award is a great honour.”

In similar vein, theatre-maker Neil Coppen admitted that he had often felt envious of previous winners, and that receiving the award had long been an ambition of his.

The sense of continuity between Young Artists past and present was reinforced by the participation of previous recipients such as 2010 music award winner and violinist Samson Diamond, and 1982 theatre award winner Janice Honeyman, the evening’s compère.

Indeed, varieties of continuity – both expected and unexpected – developed into the underlying theme of the evening.

One such variety was the continuity between childhood dreams and their realisation through the support of family members. It is, of course, something of a cliché to begin an acceptance speech with the words, “I’d like to thank my parents …”. Yet there was nothing trite about the tributes paid by each of the Young Artist recipients to parents, grandparents, siblings and wider family who provided an environment in which their artistic talents could be nurtured.

Dance winner Mamela Nyamza recalled how her grandmother, a domestic worker, made it possible for her to attend ballet lessons. Dyer pointed out that his father Steve is a seasoned jazz muso.

Coppen jokingly thanked his parents for “not making me play rugby” – but the light-hearted allusion was nonetheless a reminder that there are many young people whose school experiences are tainted by widely-held prejudices in favour of sport and against the arts.

Music recipient Ben Schoeman, who is passionate about the role that classical music can play in education, emphasised a different form of continuity by connecting South African students to Ludwig van Beethoven. In his acceptance speech Schoeman showed how, through a series of teacher-pupil relationships and over many generations, the famous German composer can be associated with those who have studied music at the University of South Africa.

Such local/global continuity was echoed in the visual arts category. Award winner Nandipha Mntambo has pioneered the use of cowhide as a material for sculpture and in her photographic self-portraits she uses bovine images to provoke the viewer into questioning divisions between humans and animals, as well as between men and women. Cattle have a significant symbolic status in South Africa, but this is not unique: as Mntambo noted, they are central to myths and religions all over the world.

Previous generations of South African artists have experienced acutely the tension between local and global commitments. For these Young Artists, however, the two are by no means mutually exclusive. Each of them is already well-travelled and has studied, exhibited work or performed internationally; the award will facilitate the growth of their reputation outside of South Africa’s borders as much as within the country.

Supporter of the arts

Standard Bank has been in the news of late for all the wrong reasons – sustained low revenues have forced the company to retrench over 1 500 staff members – and as a result it faces numerous public relations challenges.

The bank’s long-term sponsorship of the arts in South Africa, particularly its association with the National Arts Festival, is doubtless one of its major assets in terms of public image, yet suggestions that the bank will reduce its sponsorship portfolio as part of a spate of cost-cutting measures do not augur well for the continuation of that relationship. If this does prove to be the case, it will be a great pity.

But all may not be lost – in the words of Standard Bank’s head of arts and jazz sponsorship, Mandie van der Spuy, “As a bank we are dedicated to nurturing arts talent in South Africa, and we believe that the awards play a vital role in advancing the artists’ careers as well as our country’s cultural heritage.”