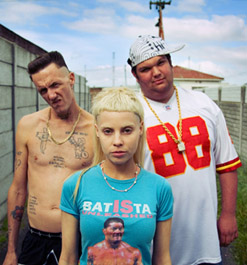 With catchy and crude beats, pre-pubescent bodies, gold teeth, tattoos and mean-looking mullets, hilarious trio Die Antwoord have become one of South Africa’s hottest – and most unlikely – exports, landing a deal with a major US label that represents superstars like Eminem and Lady Gaga.

And all this since February 2010, when the group emerged from relative obscurity with a series of YouTube videos and their debut album, $O$, posted as a free download on their official website.

Within days it went viral and the unexpected swarm of hits, amounting to more than a terabyte of data, crashed the group’s server, forcing them to switch their hosting to the major US-based blog site Boing Boing.

A quick look at YouTube today, four months on, shows that their “Enter the Ninja” video has amassed 4.4-million hits, while “Zef Side” has 2-million views, which clearly attests to Die Antwoord’s cult-like global following. Their curious name is Afrikaans for “the answer”.

“Zef” refers to the group’s X-factor, which seems to simultaneously embody white Afrikaner working-class trashiness and, according to them, “the ultimate style”.

Koos Kombuis, one of the country’s best-known alternative Afrikaans musicians and authors, said earlier this year that “zef” is a word from his childhood, and means “common”.

But “these days it’s not necessarily negative. I like being common. It’s like wearing high heels with a tracksuit. Being truly zef takes guts.”

And guts are certainly what Die Antwoord had in March and April, when they made their first two overseas trips. They began with a mini tour of Europe and the US, and then returned to North America to perform at the prestigious Coachella music festival in California, with a crowd rumoured to be as large as 85 000.

Joining a line-up that included world-famous Jay-Z, Beyonce and Gorillaz, the South Africans sent shock-waves through the audience and earned instant praise from well-known celebrities and respected publications.

Burlesque star Dita von Teese wrote on Twitter that the South Africans were among “the best of Coachella”, and later the New York Times commented that Die Antwoord “fully lived up to its reputation”.

The LA Times was also taken by the “deliciously trashy” trio, reporting that the “suspected novelty act proved they had an overwhelming magnetism and a ferocious, deadly serious lyrical flow”.

But who exactly are Die Antwoord, and why has their particular brand of music and brutal image created such a stir?

The group call themselves a “fresh, futuristik rap-rave crew from the dark depths of Africa” (sic). Its members are conceptual artist Watkin Tudor Jones, who performs as the roughed-up gangster “Ninja” alongside slinky blonde soprano Yolandi Visser, aka “Yo-landi Vi$$er”, and a rather quiet, portly chap known only as “DJ Hi-Tek”.

By opting for cleverly crafted, cryptic media interviews, the trio maintain an air of bizarre intrigue. It’s never quite clear whether they are indeed the portrayed bunch of poor, low-life pals from run-down suburbia, or a slick assembly of manufactured personas created to thrill and shock audiences who’ve grown weary of conventional music genres. Either way, it works.

Writers following the craze have their own opinions about the group’s strategy:

US-based music guide Pitchfork goes a bit deeper in its offbeat analysis Who the hell are Die Antwoord?, calling the outfit “Jones’ latest identity-skewing art project”, which, on the surface, is just the most recent “in a never-ending line of ‘did ya see that?!’ blog-hopping music memes”.

But, “considering the mix of absurdity, genuine talent and impressive production values, you can’t help but think: are these guys for real?” Pitchfork’s Ryan Dombal writes.

The group’s heavy use of slang and irreverent lyrics emanate from the culture of the Western Cape’s coloured people, who were forced to settle on the dusty plains outside Cape Town during the apartheid years, so authorities could to make space for more white families within the city.

Most communities on the so-called Cape Flats are descended from slaves brought to the country from east and central Africa, the Khoisan who lived in the region at the time of colonisation in the 1800s, and other indigenous African and white people.

This complex racial mixing – combined with a legacy of cross-over culture, displacement and oppression – still haunt the area today, and crime, drug abuse and gangsterism are rife.

But there are also likeable things that stem from this notorious place, like a highly expressive and often-impersonated dialect – a mix of mainly English and Afrikaans that’s often very funny if you get the gist – and a thriving hybrid of hip-hop music from groups like Brasse van die Kaap and Kallitz.

It’s this that Die Antwoord has picked up on and, perhaps, parodied to blow the minds – and ears – of fans.

For those who may not immediately appreciate or understand the group’s skilful fusion, Richard Poplak, of Canadian publication The Walrus, offers an artful description of zef rap: “an ungodly potpourri of top-40 hip-hop, chintz house, rave music, DIY beat-making and bad techno”.

In other words, a combination so wacky and disturbing you can’t help but be drawn in by it.

Jones’s bad-ass alter-ego “Ninja” – who has metallic incisors, heavy gold neck chains and a patchwork of prison-gang tattoos – is also straight out of the Cape Flats. In fact, “this is where where Ninja spent years, mining for meaning among the violence, the misery, the strong familial bonds – developing not just a style, but an entire persona”, Poplak writes.

Jones has been compared to Eminem in this regard, posing as a “white-boy rapper who successfully appropriated the energy and anger of the black ghetto”, editor Kevin Bloom comments in The Daily Maverick.

But Die Antwoord themselves put it best in their $O$ album intro, implying they embrace even more than just “zef-ness” and Cape Flats street cred: “I represent South African culture. In this place, you get a lot of different things … Blacks. Whites. Coloureds. English. Afrikaans. Xhosa. Zulu. Watookal,” says Ninja.

“I’m like all these different people, f****d into one person.” Yo-landi chips in, in her little voice: “Whateva, man.”

The idea is “thrillingly, gloriously radical”, and an essential step towards racial cohesion in South Africa, he writes.

Well, we’ll never quite know whether Die Antwoord are actually out to unite an entire nation – or simply cause a bit of controversy and entertaining hype along the way – as they’ll probably never tell us, but that’s okay.

Their rise to fame has been a gritty and fascinating study, and has carved out new, brave arenas of performance and expression. Let’s hope there’s a lot more to follow …