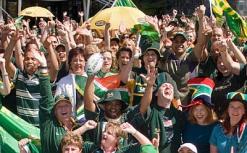 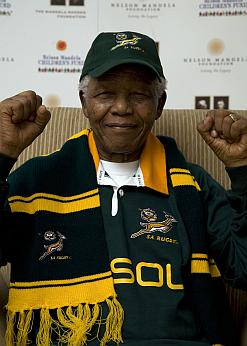 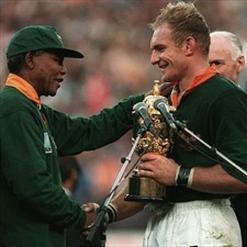 One of the most enduring moments in
sporting history – Nelson Mandela, wearing
a replica of Bok captain Francois Pienaar’s
number 6 jersey, hands Pienaar the Webb
Ellis trophy when the Springboks first took
the title on home soil in 1995.
(Image: IRB Rugby World Cup 2007)

The South African Rugby Union (Saru) has successfully managed to overcome recent controversy and uncertainty to be named by the International Rugby Board (IRB) as the second-best rugby administration in the world. Rugby’s world governing body placed only the Welsh Rugby Union ahead of the local organisation.

The announcement was made by current Saru president Oregan Hoskins, who said that he was delighted with the great honour for Saru. Hoskins added that his vice president Rautie Rautenbach, also head of the East Gauteng-based Falcons provincial union, had made known the contents of an IRB report which named Saru as one of the top two rugby administration bodies in the world.

“It is so heartening because a few years ago Saru was in a state of disarray with all the infighting,” said Hoskins. “So we are really pleased. It is a great feather in our cap.”

The local authority has overcome serious challenges that arose a few years back, with vicious infighting and back-stabbing among management tarnishing the local image of the game in South Africa and internationally. At one stage government was forced to intervene to quell the hostilities.

However, the new board has worked hard to transcend the blemish on Saru’s record, keeping debates discreetly in the boardroom instead of airing them in the press as the previous administration did.

“Communication at all levels in Saru has improved significantly this year,” commented Saru CEO Johan Prinsloo. “It is important for us as an administration to function well because we are one of the top rugby nations in the world and we want to lead by example.”

The Springboks, South Africa’s national rugby team, are currently ranked second on the IRB’s world rankings, just three points behind New Zealand’s formidable All Blacks. Among their supporters is former president Nelson Mandela, who has been seen wearing a Springbok rugby jersey on a number of occasions.

Saru weathered a storm earlier in 2008 when officials from the Parliamentary Portfolio Committee on Sport described the sport as “racist” and “for criminals”, sparking a storm of outrage amongst officials and rugby followers alike – many of whom are not white.

The committee also attempted to have the iconic national rugby emblem, the Springbok, removed from the jersey altogether, saying that it was “divisive” to the nation owing to its history as the symbol of a formerly white-dominated sport. The Springbok, South Africa’s national animal, sits traditionally on the left side of the jersey, in pride of place over the heart. It will now move to the right side, to be replaced by the King Protea, South Africa’s national flower.

Then there was a dispute over ownership of the Springbok emblem, with both the national Department of Sport and Recreation and Saru claiming that right. It finally emerged, after an investigation by a top firm of intellectual property lawyers, that the sport ministry is not the legal owner of the Springbok rugby emblem. The firm could not say, however, whether Saru or its business division SA Rugby was the owner.

And in spite of inflammatory comments from controversial Springbok and Western Province player Luke Watson that the Springbok jersey was “a burden” and that it nauseated him to wear it, Saru has had the last laugh as it has been acknowledged for its smooth operation by international rugby’s highest authority. Watson has since reversed his stance.

Saru arose out of the old South African Rugby Football Union and was established in 1992 after the amalgamation of two rugby bodies – the whites-only South African Rugby Board and the non-racial South African Rugby Union. The body is based at Newlands in Cape Town, home of the world-famous Newlands rugby and cricket stadiums, both of which boast the spectacular Table Mountain as their backdrop.

The establishment of the new rugby administration body also meant that South Africa could be readmitted to world rugby – the country had been ostracised for eight years during the tenure of the former apartheid regime.

Saru, which became known by its current name in 2005, has since formed a new business arm known as SA Rugby, which oversees all commercial matters such as branding, media rights, financial and medical services, and merchandising.