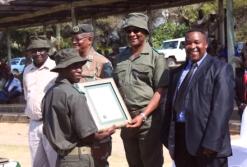 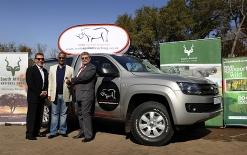 Volkswagen has sponsored six of their Amarok bakkies to the Rhino Protection Initiative.
(Image: Volkswagen) 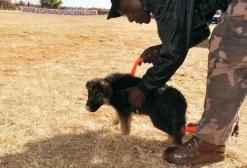 The canine unit will use specially trained foxhounds, equipped with GPS tracking devices on their collars, to help locate suspected poachers on the grounds of the park.
(Image: SANParks)

The first group of 150 new game rangers promised to the Kruger National Park (KNP) by the minister of environmental affairs, Edna Molewa, earlier this year to boost efforts against rhino poaching has been deployed.

The rangers are coming in at a critical time as South Africa continues to pay a high price with the senseless killings of the country’s rhino population, said South African National Parks (SANParks) CEO Dr David Mabunda.

Speaking at a special function on 31 July, Mabunda talked about the readiness of the 49 graduates of the anti-poaching programme, as well as a R5-million (US $600,400)sponsorship from the Unitrans Automotive, Volkswagen and Audi divisions to help the park with this and other future efforts in the fight against poaching.

“The new rangers will adopt a multi-disciplinary approach, and draw skills and expertise from various law enforcement agencies currently deployed in the fight against poaching.”

According to Mabunda, the improved incomes of average citizens in Asian countries have pushed the demand for rhino horn to higher levels than before. More and more people can now afford illegal horn, which is desired because of an unfortunate superstition that attributes healing properties to rhino horn, despite modern scientific evidence to the contrary.

“We need to close down the syndicates that are enticing poorer members of society to engage in criminal activities, recruiting them to the front line of these evil operations,” he said.

With help from the corporate sector, and the support received from the SANParks Honorary Rangers – a group of volunteers committed to conservation in support of the body – SANParks is acquiring some of the much needed equipment to effectively take the war to the poachers.

“This is an indication that South Africa has realised that the fight against poaching will not only be defeated through the work of law enforcement agencies alone, but through a unified front, “said Mabunda.

He further acknowledged the help his organisation is receiving from the government, in the form of members of the South African Police Service (SAPS) and the military, to patrol the 450km-long national border on the park’s eastern boundary. On the other side of the border is Mozambique.

The new rangers took part in a special parade, which was inspected by a delegation including several of SANParks’s top rangers and managers, as well as high ranking officials of the SAPS and the military’s border patrol units.

As part of the sponsorship, Unitrans will make two Amarok 4×4 utility trucks available for the rangers, with one of these going to a canine unit that will soon be established.

The canine unit will use specially trained foxhounds, equipped with GPS tracking devices on their collars, to help locate suspected poachers on the grounds of the park.  When a positive signal is picked up from the dogs,  a helicopter unit will move in on the suspects and once they are cornered, arrests can then be made.

Another innovative tool is a DNA database in which information collected from the rhino horn will be stored. When a poached rhino carcass is found, the details of that rhino’s DNA are entered into the database. The database is used to match horns seized at border posts and in raids with the information on record, thereby positively connecting individuals to poaching activities and providing evidence for arrests and convictions.

It is hoped that this method will help authorities narrow down the key areas where the illegal trade is rife and make it easier to bring those responsible to book.

“We must let the poachers know that we will seek them out, we will find them and they will be dealt with accordingly. This is a war that we plan on winning,” Mabunda warned. 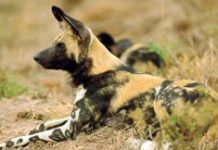