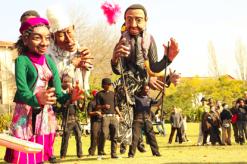 The Giant Match was a collaboration
between The French Institute and the
Wits School of Fine Art, as part of the
2010 Fifa World Cup festivities.
(Image: French Institute)

The long-standing relationship between France and South Africa will be further strengthened over the next two years when the Saisons croisées France-Afrique du Sud 2012/2013 formally kicks off in June this year.

The exchange programme was set up at the instigation of presidents Jacob Zuma and Nicolas Sarkozy, who met in France in March 2011.

It follows from successful Saisons croisées which have already taken place between France and India, Russia and Brazil.

Engagements between South Africa and France will be reciprocal in nature and involve a range of cultural and artistic activities, and also touching on commerce, investment, science and technology, tourism, sport and education.

Alain Juppé, the French foreign affairs minister, shared details of the programme with South Africans during his visit to the country in November 2011, when he attended the inauguration of the new premises of the French Institute of South Africa in Braamfontein, Johannesburg.

After many years of renting facilities, the French Institute finally decided to acquire permanent premises, a testimony to France’s “desire to make cultural and scientific cooperation part of a long term vision”, said Juppé.

The French Saisons croisées will run from June to November 2012 throughout South Africa, particularly in the bigger cities of Johannesburg, Pretoria, Cape Town, Durban and Port Elizabeth.

Popular cultural events such as the National Arts Festival in Grahamstown, Johannesburg’s Art Fair and Food Wine Design Fair, and the Durban International Film Festival will benefit from the collaboration.

Galleries and theatres, among them the South African National Gallery in Cape Town, the Standard Bank Gallery in Johannesburg, the State Theatre in Pretoria, and the Soweto Theatre will work with French delegations during this time.

“For France, it will be an opportunity to show the South African public the modernity, creativity and diversity of the French language and culture,” said Juppé, “and will show decision-makers and students that our country is an attractive, reliable and committed partner.”

Private and public projects by institutions or individuals wishing to participate in the Saisons can contact the French Institute for more information.

In turn South Africa will be given the chance to show off its cultural diversity and advancement in many different fields at the Saisons croisées Afrique du Sud from June to November 2013 in France.

Major French cities like Paris, Marseille, Lyon, Bordeaux and Toulouse will benefit from the exchange.

South African artists are no strangers to French audiences. The ever-popular Johnny Clegg and the late Miriam Makeba successfully conquered the hearts of the French with their African musical styles.

Known as Le Zoulou Blanc (the White Zulu), Clegg is a regular visitor to the country – he last toured France in 2011 – while Makeba was an honorary French citizen.

The late Gerard Sekoto, an artist who was much revered by French art lovers and who spent 40 years in exile in that country, was honoured by the French government on several occasions.

More recently, in June 2011, South African artist Nicolaas Maritz was one of five winners chosen by French NGO Dessine l’espoir for his HIV awareness poster Love the one you’re with. The NGO’s poster competition sought artwork to use in an Aids awareness campaign.

Juppé said the exchange will let South Africa prove to the French that the traditional image they have of this country is a thing of the past, and show off the new South Africa, a modern and dynamic democratic state, which plays a role in world stability.

In 2012 the International Federation of Teachers of French (FIPF) meets for the first time on South African soil, and for that matter in the southern hemisphere.

More than 2 000 delegates are expected to attend the 13th FIPF Congress, taking place at the International Convention Centre in Durban from 23 to 27 July.

FIPF president Jean-Pierre Cuq said on the IntoFrench website that the decision to hold the congress in Durban was unanimous. The city’s enthusiastic and professional presentation showed that “they were the best candidate”.

France made its first formal institutional commitment to South Africa with the opening of the French Institute a year after the country’s first democratic elections in 1994.

It’s easy to learn French in South Africa, with 14 Alliances Françaises and three French schools – the Lycée Jules Verne in Johannesburg and its Miriam Makeba satellite in Pretoria, and Ecole François le Vaillant in Cape Town.

Alliance Française also operates in Botswana, Lesotho, Namibia, Swaziland, Mozambique and Zimbabwe, while the Campus France South Africa helps students of the French language to continue their studies in France.

“French culture wants to be present wherever the vibrant South Africa is transforming and modernising,” said Juppé.