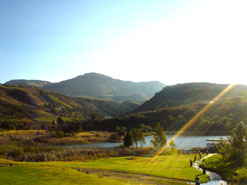 The enchanting Drakensberg Mountains
are deemed to have a spiritual impact on
visitors.
(Image: Wikimedia) 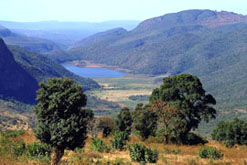 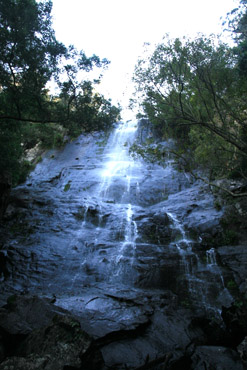 One of the many waterfalls in the
Hogsback  valley.
(Image: Tusafiri)

The sacred Lake Fundudzi situated in the mountainous area of Tshiavha village, north of South Africa, will soon be declared a national heritage site.

The Limpopo Department of Arts and Culture has confirmed that processes to declare the enigmatic freshwater lake are at an advanced stage.

Spokesperson for the department says the South African Heritage Resource Agency (SAHRA) is yet to decide on an official date for the declaration.

SAHRA is a statutory organisation established under the National Heritage Resources Act of 1999, as the national administrative body responsible for the protection of South Africa’s cultural heritage.

The great powers of Lake Fundudzi have been kept a closely guarded secret by the Vhavenda people, who have preserved it for generations.

The lake is often associated with myth and legends of the Vhavenda people and is believed to be protected by a python god, who has to be pacified annually with gifts of traditionally brewed beer.

As the legend goes, a Venda man, with a broken heart after losing a great love, in his sorrow walked into Lake Fundudzi and turned into a python.

In Venda culture, the python is the god of fertility and maidens still perform the famous Domba-python dance in the sacred lake to honour this god.

The young women form a line in which they hold on to the elbows of the maiden in front of them, and using their joint arms, make snake-like movements next to the lake to honour the god.

Other myths around the lake include a story of mysterious “zombies” which live near at the lake and play the traditional Venda music known as Tshikona.

The lake is surrounded by the Thathe Vondo forest, deemed to be so mystical and filled with spirits that few Venda people venture into it for fear of alleged hauntings and a lightning bird called “Ndadzi”.

It’s believed that on the rare occasion that a visit to the lake is granted, visitors must turn their backs on the lake and view the water from between their legs.

This ritual is called “Fundudzi” after which the lake is named.

Visitors travelling to the Limpopo are able to get a glimpse of the lake, from above, when travelling along the surrounding mountains.

The naming of Lake Fundudzi as a heritage site comes at a time when South Africa is celebrating heritage month, with 24 September marked as a public holiday to celebrate Heritage Day.

There are a number of sites in South Africa that are considered to be sacred.

The fertility caves in the eastern Free State, for instance, have served as a spiritual gathering place of prayer for over 800 years to various tribes and religions in and around southern Africa.

Hogsback in the Eastern Cape is also regarded as a place of spiritual upliftment. Situated in the Amatola Mountains, it’s surrounded by large tracts of indigenous forest, and waterfalls with names such as Madonna and Child, and the Bridal Veil Cataract, Swallowtail and Kettlespout.

In the Limpopo province, the forest of the rain queen, Modjadi, is highly regarded as a place of deep spirituality.

The Modjadji Reserve is the birthplace of the famous lineage of Rain Queens of the Lobedu tribe, who are said to have mystical powers that can influence the rainfall.

Mist usually surrounds the Modjadi village, and the Modjadi Cycad Reserve is said to be one of the most unique plant kingdoms in Africa.

The Ukhahlamba-Drakensberg Park is one of the official World Heritage sites in South Africa. Originally known as the “Dragon Mountains”, the site offers waterfalls, mountain peaks and rocks decorated with San rock art.

Once home to the ancient shamans and medicine men; the Drakensberg is also known for pilgrimages taken to the area for those who want to meditate peacefully.

The San and Bushman rock painting are also said to represent the ritual called, the Great Dance. In this dance, the dancer goes into a trance, through which the San say they can harness a form of spiritual power that is like electricity. They use this power for healing, hunting, and making rain.

Safari with a purpose

For travellers looking for holidays with a deeper meaning, Spiritual Safaris, a Western Cape based tourism company now offers tourists with a unique travel package.

According to the company, the trip is structured in way that gives the traveller an opportunity to have a deeper connection with nature than that which is usually offered by mainstream tourism packages.

The five-day tour consists of a five-hour train journey from Cape Town to the Karoo. On the first night the tourists will partake in stargazing with a professional guide.

On the second and third day, the tourists get the opportunity to explore the Swartberg mountains and enjoy a talk by palaeontologist, Dr Judy Maquire.

In addition to studying fossils, Maquire has extensive experience in working with the Bushmen. She has closely studied their survival as well as their use of food plants.

Early birds can also enjoy a 5:30am walk to the nearby show grounds to watch horses in training. After breakfast, the group is then taken to a hidden valley in the heart of the Swartberg mountain range, described as “Die Hel”.

On the fourth day, the tour moves to the southern Cape area of Gamkaskloof valley. Here, tourists have the opportunity to meditate, listen to nature and take time for reflection.

On the last day of the tour, visitors enjoy a laid back morning, before a trip on a private jet after lunch, where they are jetted back to Cape Town.

Many travellers claim that the tour is spiritually rejuvenating. On its website, there are testimonials posted where happy customers share their experiences.

One particular satisfied customer, Judyie Al-Bilali from the US, says this of the trip, “It was deeply relaxing and at the same time had a spiritual intensity and a magnificent opportunity to connect with the natural world.

“I started dreaming intensely in the Karoo and the dreams have continued, bright, complex, colourful, clear. There is undoubtedly a rich Shamanic tradition connected to the land.”