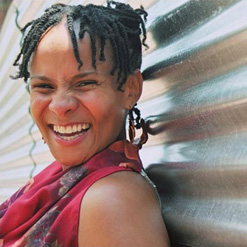 Perfomance poet Lebo Mashile is one of
the South African artists who have lent
their talents to the campaign.

The majority of South Africans feel deep shame and anger about the criminal acts of so-called xenophobia perpetrated by just a few. Millions of rands worth of donations and contributions have poured in to relief organisations across the country. Now a group of local musicians is taking action in the way they know best – they have come together to record a song urging South Africans to unite against violence.

The Not in My Lifetime campaign launches at the end of May 2008. Recording of the title song is complete, and the song is expected to hit the airwaves within weeks. The campaign’s name alludes to the outrage that most ordinary South Africans have felt towards the brutality visited on those whose only crime was to have been born in a foreign land.

The aim of Not in My Lifetime is to reinforce the positive image that South Africa has earned through years of hard work, and to project the message that constructive values and fighting injustice is the answer to achieving peace on the African continent.

The campaign, co-ordinated by Ugandan-born Lee Kasumba of youth radio station YFM and Siyabonga ‘Slikour’ Metana of award-winning hip hop group Skwatta Kamp, has a multi-faceted approach that will drive home the message as effectively as possible.

“I’m really excited about all these artists being on one track,” said Kasumba. “These are powerful and influential individuals and people take more notice if the person that they respect is involved in such a cause.”

Not in my lifetime

Kasumba revealed that the campaign came about through a conversation she had recently via text message with award-winning singer Thandiswa Mazwai. “Thandiswa was saying how really hurt she was about the xenophobic attacks, and I SMSed back to say that I can’t believe this is happening in our lifetime.” Out of that comment came the inspiration for the campaign.

The likes of rappers and R&B stars Simphiwe Dana, Hip Hop Pantsula or HHP, DJ Sbu of YFM, Skwatta Kamp, MXO, Kwela Tebza and Tumi Molekane, among others, have turned their talents towards supporting victims of the violence.

In addition to the artists, a host of other entertainment industry players have been enlisted to deliver a series of televised public service announcements that will be distributed to people in South Africa and internationally, through various broadcasters. These include sports broadcaster Udo Carelse, performance poet Lebo Mashile, Metro FM DJ Bad Boy T and his real-life partner Unathi of YFM, singer Thandiswa Mazwai and Swazi prince Ntsika Dlamini.

Radio stations and websites will receive sound clips delivering the campaign’s message. Political science student turned successful photographer Liam Lynch is set to produce a collage. A music video is scheduled for filming in June although a release date has not been set. A range of merchandise will soon be available, with all proceeds going towards victims of the violence. Finally, a poster bearing the campaign’s slogan will be made available in different languages.

Over the past two weeks 62 people have lost their lives, according to the latest reports, and thousands driven from their homes. It is not known exactly how many people are living in refugee camps at the moment but figures range from 35,000 to around 70,000.

Mozambique has declared a national emergency as thousands of destitute citizens return home. The National Emergency Operations Centre, the operational wing of the Mozambican government’s relief agency, has initiated disaster management operations. Thousands have already poured across the border and there are many more in temporary shelters in South Africa awaiting transport.