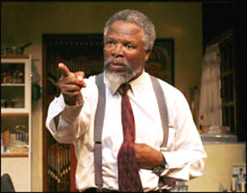 John Kani in a scene from the play
“Nothing but the truth”. The movie
adaptation won the Silver Stallion of
Yennenga, the Second most prestigious
prize at Fespaco.
(Image: Village Voice) 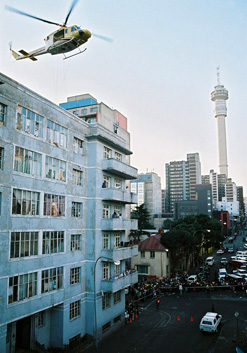 A scene from the gangster movie
Jersusalema, set in the hard
Johannesburg inner-city flatland of
Hillbrow.
(Image: Jerusalema) 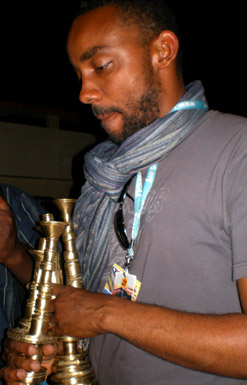 Tendeka Matatu, the producer of
“Jerusalema”, shortly after receiving the
three awards scooped by the movie.
(Image: Khanyi Magubane) 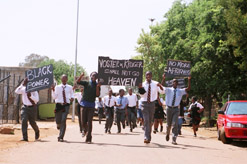 A riot scene from the four part series
“When we were black”.
(Image: SABC)

Veteran actor John Kani’s screen adaptation of his play Nothing but the Truth took the top honours at the Fespaco Film Festival in Ouagadougou when it won the Silver Stallion of Yennenga, the second most prestigious award at the festival.

The film also won the Ousmane Sembene Prize for Peace, sponsored by Ecobank, one of Burkino Faso’s leading banking institutions.

In the film, director and lead actor, Kani, plays a librarian, Sipho, who is denied a promotion. Sipho is embittered by the favouritism his parents showed his elder brother, who died in exile, leaving Sipho the burden of burying him after his daughter repatriates his remains.

In real life, police shot Kani’s brother dead in a church while reading a poem at the funeral of a nine-year old girl killed during an anti-apartheid riot.

The imaginative director Khalo Matabane’s television series When we were Black received an award for the Best Television Series.

When we were Black is set in Soweto in the 1970s and deals with the coming of age of a 17-year-old boy, Fisto. Determined to get the girl of his dreams, Mangi, he even joins the school choir because she sings in it.

Unfortunately for Fisto he is tone deaf and the choirmaster terminates his singing career, but keeps him as an assistant.

After a dramatic series of events, Fisto eventually declares his love for Mangi. That day the two make love the first time.

The theme of innocence lost is used as an extended metaphor as the day they consummate their love is also the day of the Soweto student uprisings, June 16 1976.

The two lovers watch in horror as the town outside explodes with students confronting policemen, bodies, young blood and gun fire filling the streets.

Their innocence is lost forever in that moment, and so is Soweto’s, which will never be the same.

The film was initially pitched at the Sithengi Film and TV Market as a feature, but later commissioned as a four-part one-hour series by the SABC.

It was, however, re-edited into a full feature for the festival.

To give the film an authentic feel of the student uprisings, actual archived material is used as part of the production.

In addition, a portion of a neighbourhood in Soweto was used to recreate the 1970s.

“Working with Khalo Matabane on this important and historical series was an incredible journey.

“His ability to work through the characters and how the characters drive the story, the conceptual decisions to shoot the series very tight so as to be authentic to 1976 with the limitations we faced, was both an honour and an emotional experience,” says film producer Carolyn Carew.

The film follows the rise of Lucky Kunene, a once petty criminal who rises in the ranks of the criminal underworld.

After cutting his teeth on hijacking, he moves to Hillbrow, where he tries to make an honest living in the taxi industry.

However, after his taxi is stolen, he moves to a new enterprise, stealing buildings. Along the way he makes numerous enemies, falls in love with a Jewish girl, and is constantly on the run from the police.

With the police closing in on him, the streetwise Kunene tries to stay ahead of the game.

In the Best Documentary category, the award went to Egyptian filmmaker, Jihan El-Tihari, for Behind the Rainbow.

Behind the Rainbow tells the story of liberation movements who go on to assume power. The catalyst for the story is the relationship of former president Thabo Mbeki and current ANC president Jacob Zuma.

The once close relationship of the two men crumbles as comradeship quickly evaporates to make way for power mongering within the organisation.

Another South African project, which was nominated for this year’s awards, was the documentary feature of award-winning filmmaker, Zola Maseko’s Manuscripts of Timbuktu.

This is not the first time that South Africa has featured prominently in this competition. In 2005, Maseko’s film Drum took the top award, the Golden Stallion of Yennenga.

The history of the manuscripts can be traced as far back as the 12th century. Islamic scholars brought them to the city of Timbuktu, then a trading hub for businessman, especially in the salt industry.

There were several thousands of manuscripts. The bound texts contained teachings of Islam during the middle ages and covered a variety of subjects. These included astronomy, medicine, mathematics, chemistry, judicial law, government, and Islamic conflict resolution.

By the beginning of the 1600s, Moroccan invasions from the north started to affect scholars and they slowly drifted to other areas of the Mahgreb, or North Africa, where they could study in peace. As a result the city’s manuscripts suffered a severe blow, many falling into an irreparable state.

The film reveals the history of the priceless manuscripts, through the story of Ahmed Baba, one of Africa’s greatest yet seldom acknowledged or known intellectuals.

Regarded as one of the most prolific writers of his time, this intellectual held great knowledge and subsequently became one of the most frequently consulted figures in the Mahgreb.

In a bid to take the viewer back to the heart of 14th century Timbuktu, when it was regarded as an intellectual hub for writers, teachers, religious leaders, mathematicians and scientists, Maseko dramatises the major periods in Baba’s life.

The film allows the viewer to experience life within the city and its holy mosques. It also tracks Baba’s journey, which eventually saw him uprooted from the great city and travelling to his final destination, Morocco.

Talking about his film, Maseko says the idea was first pitched to him four years ago by then-justice minister Brigitte Mabandla. “Back then, I didn’t even know much about the manuscripts.

“I remember her [Mabandla] describing to me in great detail about tattered old trunks under people’s beds and how these manuscripts have survived over hundreds and hundreds of years.”

While conducting his research, the history and intrigue of the manuscripts became more than just a concept. “We have a rich, intellectual heritage that has been kept hidden from us and the more I researched, the more obsessed I became. The final product is The Manuscripts of Timbuktu.”