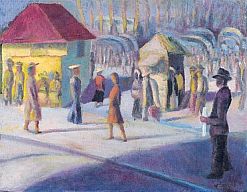 Local artists excelled at the Bonhams South African art auction in London on 24 March, selling 110 works for a grand total of R28.5-million (US$3.8-millon).

The sale, the seventh of its kind in five years, showed how well-positioned modern South African art is internationally, Bonhams said, adding that “private buyers, collectors, museum and gallery curators from the US, Europe and beyond expressed strong interest”.

Paintings by well-known artists such as Jacob Hendrik Pierneef, Gerard Sekoto and Maggie Laubser all beat their pre-sale estimates,” the auction house said in a statement.

Pierneef’s An Extensive View of Farmlands went for R3.9-million – far exceeding the price it was expected to sell for, which was set between R1.3- and R1.9-million.

Sekoto’s Market Street Scene, Cape Town sold for R2.1-million, also more than the estimation of between R1.3- and R1.9-million.

“Once again we have been delighted by the response from buyers. After five years of selling South African art I feel that this is not a blip or a fashion, but the start of a long march to real international recognition and appreciation of this vibrant art from the tip of Africa,” said Giles Peppiatt, director of South African art at Bonhams, after the sale.

The privately owned Bonhams is the world’s largest and oldest fine art and antiques dealer in the world and maintains a strong presence on the global collectors’ market.

The first South African art sale in London was held by Bonhams in May 2006 and attracted a wide range of buyers. Almost all works sold. The famous deal of the day was Sekoto’s self-portrait, which went for R1.8-million – 10 times its estimate.

That same year Bonhams sold a further 17 works by Sekoto – including nine evocative watercolour scenes of the 1960 Sharpeville massacre – racking up a total of R4.2-million.

Since then prices for work by black urban South African artists have soared by more than 300%, Bonhams said.

The South African flag flown by helicopter at Nelson Mandela’s presidential inauguration in 1994 and a signed copy of the Freedom Charter were also up for offer at this year’s sale, but sold privately before the auction.

A South African businessman, who wishes to remain anonymous, bought the flag, and the charter was secured for South Africa in a deal brokered by Bonhams and the Liliesleaf Foundation.

“This is the happiest possible outcome for the Freedom Charter. We are delighted to have been able to arrange a deal with this South African organisation which was determined to see the charter return to where it best belongs,” Peppiatt said.

Leon Levy, the charter’s seller, agreed: “This was always my hope, that the charter would be returned to the state and I am delighted that this has now been achieved.”

The charter forms a significant part of the country’s history, having been drawn up more than five decades ago as a blueprint for a democratic South Africa.

It was compiled from a list of demands submitted by the country’s various liberation movements, which included the need for free and compulsory education – irrespective of colour, race or nationality, land to be given to all landless people, and wages and working hours to be improved.

The Freedom Charter was officially adopted on 26 June 1955 at the Congress of the People meeting in Kliptown, Soweto, which was supported by 3 000 black, white, coloured and Indian South Africans. A much younger Mandela was among the delegates in attendance.