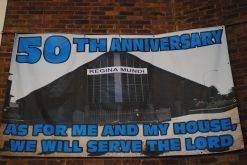 Dan Dube, the tour guide at the church, shows where the marble pulpit table was broken by an apartheid police officer during the 1976 student uprisings. 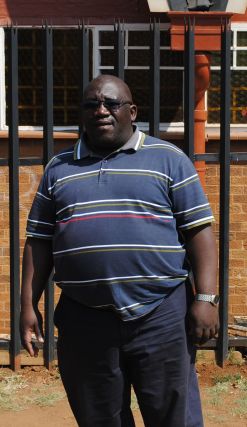 Father Benedict Mahlangu has been at the church since 2009 and said that he was very proud of his parish for making the celebrations possible. (Images: Ray Maota)

Located near Thokoza Park, in the Soweto township of Rockville, the institution bears testimony to the violence that rocked the area during the 16 June 1976 uprisings, when a group of pupils from several schools were shot by police officers for taking part in a resistance march for a better education.

Father Benedict Mahlangu – who has been at the helm of the church since 2009 – said being at the forefront of the largest Roman Catholic Church in Soweto is challenging especially with its history rooted in the struggle.

“Somewhere you have to draw the line so that you’re not seen as a church that has political affiliations.”

Mahlangu was referring to instances where community leaders and politicians wish to funeral services at the church despite not being members of the perish-due to it being an institution of the struggle.

Regina Mundi means “Queen of the world” in Latin and has been commonly referred to as the “Queen of Soweto” among residents of the township. The church is big enough to seat up to 5 000 congregants.

The church, which was consecrated by Pope Paul VI in 1962, celebrated its 50th anniversary on 26 August.

While members of the congregation each contributed R300 (US$35) towards the event, bus company Public Utility Transport Corporation, gave R20 000 ($2 379), while Coca-Cola South Africa donated refreshments for the celebration.

“I’m very proud of our parish as they made the celebrations possible,” said Mahlangu, adding that the function also served as a reunion for people who haven’t seen each other since the struggle years.

“The sermon by Archbishop Buti Tlhagale was reflective of the ideals of youngsters of the struggle years,” Mahlangu said, “the role of Regina Mundi in those days and how youngsters of today need to focus on education just like those of 1976.”

Gauteng Premier Nomvula Mokonyane also attended, and spoke of the government’s plans to launch a struggle heritage route along certain areas of Soweto in September as part of heritage month activities.

“The important role of the church is that it helped to develop political consciousness. We must be thankful for it being around,” she said.

“It was a place of refuge. You knew when you came here you were safe,” said poet Don Mattera. “Those who came in anyway were told this is a place of God, no blood shall be spilt.”

“We are trying to empower youngsters by putting them through skills training whenever there’s an opportunity so as to affirm that the church will always be there for them,” said Mahlangu.

Citing the pupils of the 1976 uprising who fought to be educated in their mother tongue instead of the prescribed Afrikaans language, Mahlangu said the church was also trying to instill the importance of education in today’s youngsters.

On the sidelines of its main religious duties, the church also runs an outreach programme called the Justice and Peace where members and the community around it help those who are less privileged.

“There are those who are unemployed and don’t have identity documents or passports, so we work with the Department of Home Affairs to help them here at the church,” said Mahlangu.

The church also conducts seminars to educate people on the importance of saving and investing. Through a feeding scheme that is available for the poor, the church’s leadership is also able to do regularly checks on the local Catholic school to extend its religious teaching programme.

Regina Mundi has also become a tourist attraction, with as many as 200 people visiting per week.

Dan Dube, who works as the church’s guide, is regarded by Mahlangu as being very informed on its history.

The church was one of the first to open its doors to activists in the liberation struggle. As political gatherings could only take place indoors, the sheer size of the church meant it was a suitable venue.

During the 16 June event, a group of pupils used the church as a refuge to escape attacks from police officers, but the officers followed suit and several shots were fired, with evidence of this still clearly visible on some of the church’s features. Several of the pupils were hurt in the attack, but there were no deaths.

While the church has been refurbished, it still bears the marks of that fateful day.

“The church decided to leave these during its refurbishment to always remind the people where it comes from and so that it does not happen again,” said Dube. 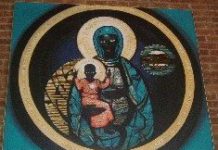