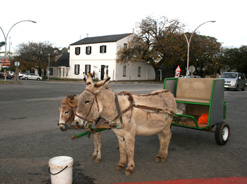 Donkey rides around town were a hit
during the arts festival. 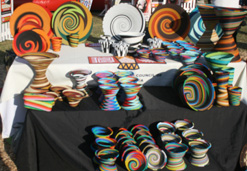 Crafters were supported by the local
government to showcase their work at
the Village Green arts and craft market. 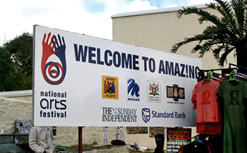 Festival goers bought tickets in their
numbers, breaking a number of records
in the event’s 35-year history.
(Images: Khanyi Magubane)

Organisers of the 35th National Arts Festival held in Grahamstown in the Eastern Cape, say a record number of tickets were sold during the 10-day event from 2 to 11 July.

The festival, labelled 10 days of Amazing, saw over 400 theatre, dance and music productions, photography and art exhibitions, crafts, poetry readings and book launches culminating in a feast for art lovers.

After the first weekend, ticket sales were up 7.7% from the same period last year.

“At the same stage last year we had sold a total of 84 897 tickets. The comparative figure for this year is 91 487,” said festival chief executive officer Tony Lankester in a statement released after the first weekend of performances.

According to the organisers, both the fringe and the main programmes showed increased ticket sales, with figures for the main festival going up by 11.7%, while the fringe performances enjoyed a 5.4% growth.

“The overall picture can still fluctuate wildly over the next week, so it is too early to celebrate or to make predictions about where we are likely to end. We are happy, though, that we have had a solid start to the event,” Lankester continued.

Fortunately for the organisers, the upward trend continued throughout the festival.

On 8 July, with just three days to go, more tickets had been sold than during the 2008 festival, with ticket sales after that serving as a surplus for the event.

The ticket sales were however not the festival’s only success.

Xoliswa Tom, MEC for sport, recreation, arts and culture in the Eastern Cape, was pleased with the progress of the festival, especially the positive influence it had on the province’s rural communities in the province.

In a bid to support the local crafters, government paid for their transportation, accommodation, and meals.

The government also covered the cost of the crafters’ sites at the festival’s market fair, The Village Green, ensuring that all the proceeds from sales made at the market, went directly to the artists.

Hospitality owners of bed and breakfast guesthouses in the townships surrounding Grahamstown also benefited from a new programme aimed at encouraging festival goers to opt for township style accommodation.

According to the Eastern Cape government, on average, around 153 people were booked in at the Kwam-Emakana Homestays from 27 June to 12 July.

The project generated R659 800 ($56 000) during the festival. This amount includes accommodation, meals, transport, booking office agents’ fees and community liaisons who ensured guests were taken care off during their stay.

According to organisers, traditional music is set to feature more prominently in 2010.

The performers were taken to the rural village of Ngqoko in Lady Frere, in the Eastern Cape, where they spent eight days rehearsing for the show.

Locals and tourists were treated to donkey cart rides, a new addition to the annual festival.

According to Tom, the donkey rides will feature more prominently next year and will resemble the popular rickshaw carts as seen in Durban, KwaZulu-Natal.

In another change, the festival will be extended by 10 to 15 days to accommodate the expected influx of tourists attending the 2010 Fifa World Cup.

The Nelson Mandela Bay, one of the host cities of the World Cup, is an hour away from Grahamstown.

The local government, in conjunction with the South African Broadcasting Corporation, will have a public viewing area in Grahamstown, where festival attendees will have the opportunity to keep abreast with all the soccer action.

An extensive jazz programme has also been added to next year’s festival line-up. The existing jazz shows will be extended with more artists and various collaborations.