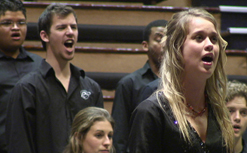 While most South Africans can rattle off our medal tally at the 2008 Olympics (that would be one) and the Paralympics (a more respectable 30), few know we won 24 in a rather different global event, the fifth World Choir Games, held in Austria in July. Formerly known as the Choir Olympics, the games are staged in a different country every four years. This years’ event was attended by more than 440 choirs from 93 countries from across the world.

South African choirs won gold in 15 different categories, bringing home not only the most gold medals, but the most medals overall in the youth and children category. The next highest tally in this category was Russia with 18. We also won one gold medal in the adult category. The way medals are awarded in choir competitions is more like a marathon than the Olympics. Gold, silver and bronze medals are awarded for attaining a particular score, just as they are for different times in marathons.

Cape Town-based choir Pro Cantu, under the direction of conductor Leon Starker, won two gold medals, coming first in the Sacred Music category and fifth in the Youth Choir Mixed Voices category. The choir has been raising its voice in song since it was started by Andre van der Merwe in 1997. There were children’s choirs and there were adult choirs in Cape Town, but no youth choirs, so Van der Merwe took the gap.

The singers’ ages range from 14 to 25, it’s a mixed bag, with lots of different energies at play. Francois Swart, a 22-year-old IT consultant says he likes the youthful vibe of the choir. He started singing with Pro Cantu in 2004, the year Starker took over from Van der Merwe as conductor. Swart took a few years out singing for the Stellenbosch University Choir when he was a student, but he is glad to be back.

The style of Pro Cantu, which means “for singing”, is a capella – voices only, with no accompanying instrumental music. They memorise all their words and music, using no sheet music, and there is no amplification. They’re truly unplugged. And it’s astonishing what a well-trained choir can do with their voices – and their bodies.

In one song – Laduma, which tells a story of group of people walking to a wedding at a nearby village – the singing is interspersed with astonishingly well-coordinated finger clicks and foot-stamping that sounds so convincingly like rain and thunder it had the audience at one performance anxiously looking towards the ceiling.

In another, the Australian piece Past Life Melodies, the singers use their voices to emulate the sound of a didgeridoo, and by careful harmonising create layers of resonance to form new sounds that no one choir member could achieve alone. If you saw the movie As it is in Heaven you’ll have an idea of what it’s about.

The choir’s age range makes it a part-time activity, as the members have school, university or, less frequently, work obligations. They rehearse twice a week for two hours each, which doesn’t sound like much, but some members struggle even to find that much time.

Scott Lee-Jones, a fourth-year medical student, often threatens to leave due to work pressure but he just can’t bring himself to do so. He loves the music and – coming from a musical family – can’t imagine living without it. Pro Cantu also gives him a chance to achieve significant milestones, such as the two gold medals at the choir games.

One member who will be leaving at the end of this year is Garth Kayster who, at 26, is the “old man” of the group and should really have left last year. But luckily for him – and the choir – international choir regulations allow up to 10% of the choir members to be over 25. He is the longest-standing member, having joined in 1999 straight from the Tygerberg Children’s Choir, one of Pro Cantu’s feeder choirs for Pro Cantu.

But as one leaves, another joins. One of the newest members is Monde Mdingi, a 22-year-old music student at the University of Cape Town. He’s only been in the choir for six months after trying it out at Starker’s invitation and “falling in love with it immediately”. He comes from a long line of jazz musicians, so his choral work makes him a bit of a rebel in his family

Changing membership is an integral part of the choir, and most people who leave do so at the end of the year, when prospective new members are auditioned. So the year starts with a new complement of singers who all get to know each other at a weekend “boot camp”. At the end of the weekend, they put on a mini-concert for their parents. Then they spend the first half of the year practising and building up their repertoire.

Most of the performances – and competitions if there are any – are in the second half of the year. In the latter part of 2008 they have 12 concerts. Most concerts are in the Cape Town area, but they are hoping to tour the rest of the country in 2009 – obviously during school and university vacation.

Pro Cantu is an officially registered non profit organization. To help with fundraising they perform at corporate functions, launches and other events. Each member pays a small annual fee, which covers the day-to-day running costs, and tours and competitions are funded by concerts and donations from corporations and individuals. The choir has recently cut its sixth CD, Far Horizons, which should also help to garner a few funds.