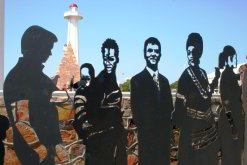 The Voting Line features metal cutouts
of real people who stood in the long
queues to vote in South Africa’s first
democratic elections between 26 and
29 April 1994. 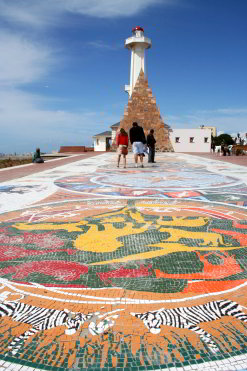 Nelson Mandela Bay Municipality in the Eastern Cape province celebrated National Heritage Day on 24 September with the launch of a magnificent new heritage walk within its inner city precinct. The walk commemorates the public life of former president Nelson Mandela and is known as Route 67.

The number 67 is significant because it is the number of years spent by Mandela in public service, as a lawyer, then a freedom fighter and finally a politician.

The walk sets off from the Campanile in Strand Street, a well-known Port Elizabeth landmark commemorating the arrival of British settlers on city shores in 1820. Built in 1923, the Campanile, or bell tower, has been given a facelift and now boasts the addition of a public art piece in the form of a kraal with stories of the city’s past depicted on ceramic tiles.

Crossing the Settlers Highway, visitors wend their way up a set of stairs past a new water feature and an impressive fishbone sculpture, before arriving at the old market square, now the Vuyisile Mini square. Mini was one of the first activists to be executed for his involvement in the fight for freedom.

Port Elizabeth’s Victorian past still holds sway in the square, with Queen Victoria’s statue keeping a stern eye on proceedings in front of the old public library, built in 1901. The majestic City Hall buildings across the square also date back to that era.

In time the queen will be forced to mingle with the likes of political stalwarts Nelson Mandela, Ray Mhlaba and Govan Mbeki, all of whom will have statues erected in close proximity.

Other great figures from local history, including Robert Sobukwe, Steve Biko and Mahatma Gandhi, will also take their place on the square in future.  Once fully completed, Route 67 will have 67 artworks, done by 67 local artists.

From there, the route winds past the quaint St Mary’s Church to the 67 steps, beautifully decorated with mosaic tiles by local craftsman, which lead up to the Donkin Reserve. At the top, visitors are rewarded with a spectacular view over Algoa Bay from the “balcony of the city”.

The Donkin Reserve was proclaimed as a public open space by Sir Rufane Donkin, who established the town of Port Elizabeth in 1820 with 4 000 other settlers. He chose to build a stone pyramid structure in memory of his late wife, on whose memorial he inscribed “the most perfect of human beings who has given her name to the town”.

The adjacent lighthouse, built in 1861, is now the home of the Port Elizabeth tourist information office.

In addition to its romantic past, the reserve is now also home to the biggest flag in South Africa, standing as proud witness to the country’s great democratic achievement.

At the height of urban decay in the inner city, the Donkin Reserve became a desolate area filled with gravel and stone. Now revitalised, the park-like atmosphere encourages a longer stay with beautiful landscaping and public art pieces.

Among these is the striking Voting Line – metal cutout figures of real people waiting to vote during South Africa’s first democratic elections in 1994. Nelson Mandela himself leads the way in familiar stance – captured with his right fist raised as he leaves the Victor Verster prison in 1990. The artwork also plays on South African stereotypes with a humorous touch, light-heartedly paying homage to the country’s cultural diversity.

Other pieces to be seen are an unusual 3.8m-high fish-bird, and a large mosaic celebrating Port Elizabeth’s history, colourfully juxtaposed against the backdrop of the white lighthouse. At night, the walkway turns into a fairy land with 34 lights strategically placed to lead the way. The entire walk is wheelchair friendly.

“The environmental upgrading of the Donkin Reserve has been about creating an activity space that means something to all residents of the city,” said  Dorelle Sapere, planning and development manager for the Mandela Bay Development Agency (MBDA), the drivers of the project.

To create greater awareness around the project, and to enhance the idea of a shared heritage, the City also hosted its first Urban Run on 25 September.

Starting and ending at the Donkin, more than 350 runners participated in a 12km obstacle race through the inner city. This included crossing the Baakens River with ropes, traversing various log-built obstacles, running through a stationary train at the Port Elizabeth harbour, and racing up a six-storey parking garage.

Participants were unanimous in their enjoyment of the race.

Nicolas Moolman, third over the line in the men’s division, said he was impressed by the skill and creativity of the various obstacles, some of which were designed by the local Boy Scouts movement.

“It was a very good, well thought out race. The obstacles were excellent and very creative, and next year, I will be back to win the race,” he promised.

A project that was two years in the making, the Donkin Reserve and Route 67 development centred strongly on Nelson Mandela, the municipality’s namesake and former Eastern Cape resident, and his significant role in South Africa. The agency worked hand in hand with the Nelson Mandela Foundation to ensure that all intellectual property rights were honoured.  It was the foundation’s idea to call the development Route 67.

In addition the project also had to work from a social, tourism and economic perspective, an important prerogative for all MBDA developments.

“We realised we needed to get people to stop, spend time here in Port Elizabeth and spend money in our shops and restaurants,” said Sapere.

The Donkin upgrade cost R17-million and was funded through the National Lotto.

The MBDA is the development arm of the Nelson Mandela Bay Municipality, and acts on its behalf to implement urban regeneration projects. Since 2003 it has completed two other projects successfully: the first was a revamp to the entire Govan Mbeki Avenue and Parliament Road to make it more pedestrian friendly; this was followed by the Uitenhage Market Square upgrade.

Says Pierre Voges, the agency’s COO: “We are trying to create spaces for people. The idea is to reverse the urban decay and in so doing, bring people and businesses back into the city.”

The MBDA has just started with its latest project, a R42-million upgrade to Kings Beach, once Port Elizabeth’s premier beachfront area. The upgrade will include extensive landscaping, incorporating the use of water features and re-development of the existing skate park.