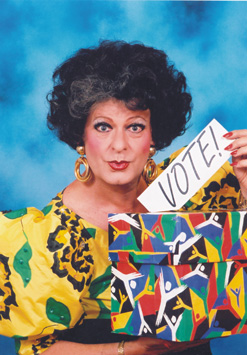 Could the message be clearer? Evita
Bezuidenhout, the former ambassador to
the apartheid “homeland” of
Bapetikosweti, the girl with a one-time
passion for Pik Botha, the next president
of South Africa – Evita wants you to vote.
(Image: Evita se Perron) 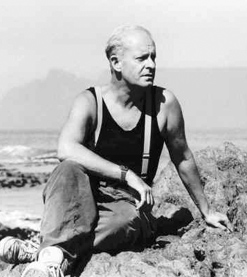 Truth is a mighty thing. It can set you free, it can be spoken to power, it can be a bitter pill to swallow, it can hurt and, of course – it can be spoken in jest. And that’s probably when it’s most effective. Powerful messages have been coated with the sugar of humour throughout history – the medieval court jester, for example, was the one person who could criticise the king and get away with it.

South Africa has had its own court jester for some 30 years – Evita Bezuidenhout, the alter ego of stand-up comedian Pieter-Dirk Uys. Evita was “born” in the late 1970s when Uys began writing a weekly column in a popular Sunday paper where she – an as-yet anonymous political wife – dished out the dirt on the ruling National Party, the architects and implementers of apartheid.

There was so much dirt Uys couldn’t dish all of it out – “simply because of the threat of censorship or being closed down,” he says.

“But somehow this woman in my column could say the unsayable, with a hint of innuendo and a hammer blow of subtlety, and get away with it.”

The more this invidious gossip-monger wrote, the more she exposed the soft and dark underbelly of South Africa’s apartheid elite, the greater her following became. The best part was that people thought she was real.

There was much speculation about her identity. “After a year someone called her ‘the Evita of Pretoria’,” Uys says.

“A quick glimpse into a biography of Argentina’s Mrs Peron gave me the ideal blueprint on which my Evita’s life could be traced.

“Ambitious small-town girl moves to the city, becomes an overnight star in a state-subsidised film industry, meets a powerful up-and-coming politician, marries him, and becomes his biggest asset.

“But,” he adds, “that’s where the musical parts from the soap opera. While a singing Madame Peron asks Argentina not to cry for her, Mrs Bezuidenhout becomes the South African ambassador to the fictitious apartheid homeland of Bapetikosweti, infecting the precious seed of homeland development with crass humour and absurd truths.”

When Uys was later asked to give Evita a surname, he blurted out the first thing that came to mind – and Evita Bezuidenhout was her name.

He then fleshed out her backstory by implicating her husband in a then-illegal inter-racial sexual liaison, and giving her three children, all of who challenged one or more of the deep-seated fears of white South Africa.

One son was openly gay, his twin brother was a neo-Nazi, and their go-go-dancing sister fell in love with – and ultimately married – the black president of the Bapetikosweti homeland. It was a carnival of madness.

Glittering on the dark side

Almost everything about Evita – from her palm-frond eyelashes to her Christmas-tree earrings, deliciously pouting smile and blood-red talons – is larger than life. She is the familiar figure of the powerful-by-marriage, once-glamorous woman of a certain age, as well as a caricature of died-in-the-wool intolerance and political expediency. She is our darker side, the skeleton in every South African’s cupboard.

But she glitters with light. She is feminine, elegant, caring, gentle, polite and ever so proper. She never swears or blasphemes, and never says anything nasty. Well, anything nasty she says is as sweet as her diabetes-inducing koeksusters, so most people don’t notice they’re being impaled on the barb of her sharp and implacable wit. If they do notice, they’re so busy laughing they don’t have the energy to be offended. This is Uys’s conscious strategy.

“The reality,” he says, “is so serious one has to lighten it. It’s too frightening. The negative can be too strong. It always has to be balanced.”

It’s a strange kind of balance, but it works. Evita’s strength is her sincerity. “She has no sense of humour, and no sense of irony,” Uys says, with the kind of genuine smile Evita is incapable of.

Evita, the woman, the icon, is a platform. She is the vehicle Uys uses to say things important to him, things he – an aging, bald, gay white man – cannot say. He relates an incident on his voter education Ballot Bus tour of 1999.

“I notice a black woman in the middle block listening to Evita’s chat with a frown. She is not impressed by this loud Afrikaans woman being so racist, so superior and so warmly received by the other black people.

“What is wrong here? She obviously doesn’t know the secret! Eventually, her companion laughingly whispers it into her ear. Evita’s critic dissolves into chuckles and becomes a fan.

“Once they know this woman up there is actually a man, Evita can say anything.”

Evita has lambasted people in real positions of power, but not mercilessly, and that’s her secret. She lambastes them with compassion. She speaks as if their fears and prejudices are normal, but in the process she exposes the ridiculous and evil reality behind them. The enemies of her victims loved her. But so did her victims.

“Evita went from cult to classic, appearing on the front pages with her glib admiration of PW Botha and her secret passion for Pik Botha, and condemning them all with her gushing praise,” Uys says.

That’s what makes Evita so hard to define. People ranging from staunch National Party cabinet ministers to Archbishop Emeritus Desmond Tutu treated her with old-fashioned gallantry – and she responded with ladylike charm and demure. All this in a country where homosexuality and cross-dressing were illegal. A country where Uys, the alter ego, languished in that special limbo reserved for famous gay men in a homophobic society.

“I could not appear on [state television broadcaster] SABC for obvious reasons,” he says. “But Evita Bezuidenhout was constantly invited and seen live on TV by a nation still wondering who this woman was. Why did she make them feel so strange?”

Taking to the real world

It took a while before Uys was ready to let Evita spread her wings – to leave the safety of the stage and step into the real world. But when she did, she blossomed. She became an outspoken opponent of all forms of injustice – by embracing each one of them. Instead of following Ghandi’s directive to be the change you want to see, she became what she wanted changed.

“The government writes my material,” he says. This was true in both in the days of apartheid and in former South African President Thabo Mbeki’s era of Aids denial. Today it is true in the political upheavals leading up to the 2009 national election.

Evita continues to speak truth to power, and Uys uses her with the precision of a laser and the force of a front-end loader. And to his eternal credit as an artist and a human being, he uses her in the service of art and truth, not of money.

Uys has been lucky that Evita has given him the financial security to kick against the traces when he needs to. In the 1990s he proposed a fabulously ambitious voter education programme to the Independent Electoral Commission but, when they started to hijack it, he did it alone with a mini-van, a few colleagues and the meagre funds he could raise himself.

In 1996, when the Department of Health spent R14.3-million on the damp squib Sarafina II, a white-elephant stage play aimed at taking the Aids message to the youth of South Africa, he did it again. He could have done a lot with R14-million, but he went it alone.

With a couple of costumes, a few wigs and a rainbow of make-up in a paper bag, he went from school to school asking for no more than a microphone, a glass of water and an audience. And with wit, humour and humility he spread the message that the new bogie man was not apartheid, but Aids.

On stage, Uys switches personas with ease – a wig here, a pair of glasses there. Evita too has proved to be the ultimate chameleon – a political chameleon. The staunch National Party supporter became a staunch African National Congress (ANC) supporter almost overnight with the advent of democracy in 1994 – like many other white South Africans.

But now the glister has started to wear off the Rainbow Nation she, like a number of others, has broken away from the ruling party.

South Africa’s fourth democratic elections are scheduled for early next year, and Evita Bezuidenhout is standing for president. This is Uys’s way of continuing his crusade to educate South Africans on their right to vote, and the change that vote can bring.

A recent article in the Mail and Guardian, one of South Africa’s most respected newspapers, listed Evita’s People’s Party in a serious and otherwise totally factual article on the different political parties standing for election. Evita’s blurring of reality continues.

On the announcement of her intention to stand for election, Mosiuoa Lekota of ANC-breakaway party Congress of the People sent her an SMS: “Evita, you are the only politician who will keep your head above the parapet.”

So flamboyant Evita, “the most famous white woman in South Africa” and the ultimate survivor, is still telling it like she sees it. And the weird and wonderful thing is there are more than a few people out there who would vote for her, if they could.