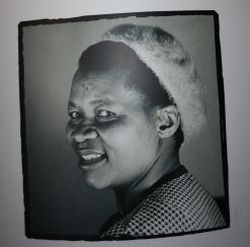 Walter and Albertina were avid freedom fighters who played a big deal towards the liberation of South Africans. 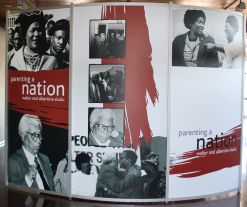 Walter and Albertina Sisulu: Parenting a Nation explores the private and political lives of the Sisulu family during the apartheid struggle. The exhibition, at the Nelson Mandela Museum in Qunu, in Eastern Cape, gives the viewer a deeper understanding of their role in the emancipation of South Africa, as well as of their deep love and abiding affection for one another.

Items on display include Nelson Mandela’s desk calendar, which not only notes his blood pressure but also Walter Sisulu’s prison release date in 1989, as well as family photos. Mandela’s summing up of the couple is also highlighted: “One cannot talk about Walter without Albertina – they were an indomitable team,” he said.

Theirs was “a unity of such deep friendship and mutual respect, a personal and political partnership that transcended and survived all hardships and persecution”. Walter and Albertina met at the General Hospital in 1941, where the latter was a nurse. Their extraordinary love story traversed 59 years. They married in 1944, with Mandela as best man, and went on to have five children.

Even though they had a big family of their own to raise, Walter and Albertina dedicated their lives to the liberation of South Africa. “Although politics has given me a rough life, there is absolutely nothing I regret about what I have done and what has happened to me and my family, throughout all these years,” the exhibition quotes Albertina. “Instead, I have been strengthened and feel more of a woman than I would otherwise have felt if my life were different.”

Her political life started after she met Walter. She became a member of the ANC Youth League and the Federation of South African Women, and was one of the leaders of the 1956 Women’s March on which more than 20 000 women walked to the Union Buildings in Pretoria to protest against the extension of the Pass Laws.

Walter was made the general secretary of the ANC in 1948, a position he held until 1954. For his anti-apartheid activities, he was sentenced to life in prison in 1963. But even as single parent while her husband was in jail, Albertina continued to keep the ANC name alive and in the 1980s was a co-president of the United Democratic Front (UDF), a civic resistance organisation.

“On the outside, Albertina Sisulu played a motherly role to comrades in the UDF. In other words, both Albertina and Walter were seen by young people in the struggle for liberation in South Africa as parents not only to their children but also to others,” explained Noel Solani, the head of programming at the Nelson Mandela Museum.

The Sisulus’ relationship was one full of hardship and separation; however, their affection for one another never diminished and they remained married for their entire lives. “The two icons are not exhibited in isolation from others, but the exhibition … was aimed at highlighting the specific and unique role they played in the education of young people and nurturing them as parents,” said Solani.

Exhibitions were an educational tool and a window to our past, he added. These exhibitions educated the general public about the South African liberation struggle and were a reminder that we should not forget where we came from and repeat the mistakes of the past.

Walter (18 May 1918 – 5 May 2003) and Albertina (21 October 1918 – 2 June 2011) were both born in Eastern Cape, in villages just kilometres apart. From those humble beginnings they went on to become two of South Africa’s most prominent political figures. Their contribution to the freedom of black South Africans was admirable and courageous, and will continue to be written in the nation’s history books.

While Mandela is widely celebrated as the man who led the struggle, it is important to remember he was one of many comrades. In his autobiography, Long Walk to Freedom, Mandela mentions the Sisulu name several times, and describes the Sisulu home as being “a home away from home”. He lived with the family in the 1940s for several months when he had nowhere else to stay. Mandela also speaks fondly of Albertina, saying she was “a wise and wonderful presence, and a strong supporter of Walters’s political work”.

Also known as the “Mother of the Nation” she was a nurse by training and one of the most important anti-apartheid activists by conviction. All five of the Sisulu five children also contributed to the struggle – Max, Anthony Mlungisi, Zwelakhe, Lindiwe and Nonkululeko. The couple also adopted three children, Jongumzi, Gerald and Beryl, whose mothers were Walter’s sister and cousin, as well as Samuel, who was a former Robben Islander.

It was with her husband that Albertina attended the first conference of the ANC Youth League, where she was the only woman present. The couple’s life was full of arrests and detentions. In 1963, while Walter was waiting for the outcome of an appeal against a six-year sentence, he decided to forfeit bail and go underground. Security police then arrested Albertina and Zwelakhe. She was the first woman to be arrested under the General Laws Amendment Act, which gave police the power to hold suspects in detention without charge.

Walter was convicted in the Rivonia Trail in 1963 for planning to sabotage and overthrow the apartheid government. He was sentenced to life in prison together with other activists, including Govan Mbeki, Ahmed Kathrada and Raymond Mhlaba. He was released from prison 26 years later, in 1989. In July 1991, he was elected deputy president of the ANC at the party’s first national conference.