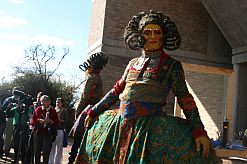 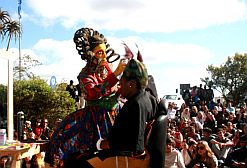 The duo has performed all over the
world, to great acclaim. 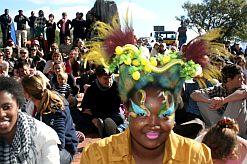 The colourful result of a performance
by Osadia.

Osadía, an “extreme hairstyling” street theatre group from Barcelona, Spain, has captured the attention of festival goers at the 35th National Arts Festival in Grahamstown, in the Eastern Cape.

The show features two enigmatic hairstylists with brightly painted faces and clad in dramatic Spanish attire, who scourer audiences and randomly choose two participants at a time, who are then taken to the Osadía hair salon, set up on a small podium.

With music thumping, audiences are enthralled as they watch the eclectic coiffeurs, Alex Rendon and Josephine Grunzy, of the Instituto Ramon Llull in Barcelona, create increasingly bizarre styles.

Rendon and Grunzy make use of hair paint, face makeup and different animal-themed toys like chameleons and snakes to create unique works of hair art.

“Crowds gather around and remain glued to the artistic hairdressers’ performance onstage, either through curiosity and a sense of wonder, or motivated by a desire to participate,” reads the theatre group’s official website.

This was the exact atmosphere outside the 1820 Settlers Monument, where Osadía had strategically set up for their show.

The monument is frequented by hundreds of festival goers on a daily basis who attend various theatre and dance shows, as well as free performances held every day in the square inside the venue between 5pm and 6pm.

Osadía, formed in Barcelona in 1966 by Rendon, has travelled all over the world for over 40 years. The Spanish word osadía means daring or bold – a fitting name for the theatrical stylists.

The company has performed internationally in the United Kingdom, the US, Australia, Scotland Germany, Switzerland and now, also in South Africa.

Osadía’s shows have consistently received rave reviews from the press.

“For those brave enough to take a seat in the barber’s chair, artistic duo will create weird, and wonderful hair sculptures, using creative and innovative concepts of hairdressers,” reads a review from the City of Sydney Times in Australia.

According to a reviewer for The Scotsman, “They are incredibly creative and quick. All hairdressers should try and see them. They are stunningly good.”