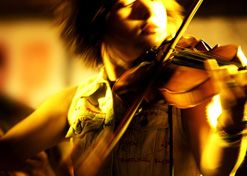 A violinist performing in front of
the ever-appreciative Oppikoppi crowd.
(Image: Chris Kirchhoff) 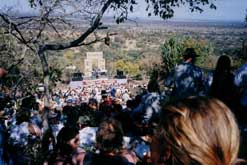 One of the open-air stages on the
Oppikoppi hill.
(Image: Oppikoppi) 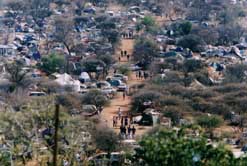 The bush is dotted with numerous tents,
vehicles, and people, all there for a
common purpose – music.
(Image: Oppikoppi)

The annual Oppikoppi music festival has grown tremendously in size and scope since its inception in 1994. Now the Limpopo-based festival has been selected by British newspaper the Daily Mirror as the fourth-best music festival held outside of the UK – and is the only African festival on the list.

Outgunning many of the big names of the international music scene, Oppikoppi came in ahead of Switzerland’s renowned Montreux (10), Australasia’s The Big Day Out (9), The Electric Picnic (8) held annually in Ireland, Germany’s renowned Rock Werchter (7), the Airwaves festival (6) held in Iceland, and the Bestival (5) held in the Isle of Wight. The Isle of Wight falls within British territory, but the fact that concertgoers have to catch a boat or plane to get to the venue was reason enough for it to make the list.

The top three spots were taken by the Fuji Rock (3) festival held in the valley of Mount Fuji in Japan, Benicàssim International Festival (2) held in Spain, and one of Europe’s most popular events, Pukkelpop (1) held annually in Flemish Belgium. Oppikoppi and the Pukkelpop festival have a cultural exchange agreement where, each year, artists, DJs, crew and media fly between the two countries to participate in both festivals.

On top of the hill

Oppikoppi’s ranking is a tribute to the quality of South African music and to the ever-growing popularity of the festival. Turning 15 years old in 2008, Oppikoppi started as a small get-together near the platinum mining town of Northam in Limpopo province, situated just 90 minutes’ drive from Pretoria. The focus was on Afrikaans rock music and a crowd of just 1 000 turned up to watch 27 acts.

The name is a colloquial variant of an Afrikaans phrase “op die koppie” meaning “on top of the hill”. This refers to the fact that the camping area lies at the foot of a hill, at the top of which is the Sipho Gumede stage, named after the late South African jazz bassist. Here hip hop and dance performers strut their stuff, while the big acts and rock artists appear on the main Oppikoppi stage.

Since those early days Oppikoppi has grown into more than just a festival. Besides the annual event in the middle of the year and the spin-off Not-Quite-Easter festival held in April, Oppikoppi Productions holds music events around the country throughout the year and plays a substantial role in the thriving South African music scene. It has diversified into sponsorship management, an artist booking agency, a below-the-line ad agency, and events management, producing a host of shows away from the main Oppikoppi festival.

Oppikoppi now offers a host of genres ranging from spoken word, world music, blues and jazz to house, ska and punk – the only stipulation is no cover bands or pop bands. “A lot of people come to Oppikoppi to see what is happening in the music industry at the moment as the festival (August more than Easter) is a showcase of the current status of our music industry,” says Annelie Hoffman of Oppikoppi. The growth in attendance figures, she says, shows that there is increasingly strong support for local music.

The Easter and main festivals are both held annually on the Oppikoppi farm in Limpopo, where thousands park their dusty vehicles, pitch their tents in the bush, and socialise over three days while enjoying music from the cream of mostly South African, but also international music talent.

The festival’s natural resources limit the maximum number of attendees to about 15 000. “Because our water is sometimes a limiting factor, we don’t really want to go over that amount so that the people attending the festival can all have as comfortable a time as possible,” says co-organiser Misha Loots.

In deciding which bands to include on the programme, says Loots, they look at the obvious drawcards such as the new big acts. The organisers also give a platform to up-and-coming bands which, they believe, have the potential for success. “We get loads of submissions on an almost daily basis, so it is sometimes very hard. There are only so many slots per festival and so many more bands.”

The brief review in the Daily Mirror compared Oppikoppi to Britain’s Glastonbury festival, a weekend event that takes place on Worthy Farm in the Vale of Avalon – rumoured to be where King Arthur may be buried. Here, too, thousands of fans from all over the world congregate to pitch their tents on the 900-acre property and see the world’s top musicians in action.

The Oppikoppi festival is said to have been hugely influential in the development of South African rock music, which has progressed in leaps and bounds since the late 1990s. Many local acts have gone on to enjoy enormous success overseas – among them are metal group Seether, Christian rock band Tree63, Just Jinjer, and Dave Matthews, and in the past, Tribe after Tribe and eVoid.

Artists of the calibre of Stealing Love Jones, Cassette, Harris Tweed, Henry Ate and Tidal Waves will be seen at this year’s events.