This weekend Oppikoppi celebrates 21 years of bringing South Africans together with good music and great memories, while creating a unique template for diversity, acceptance and artistic collaboration. 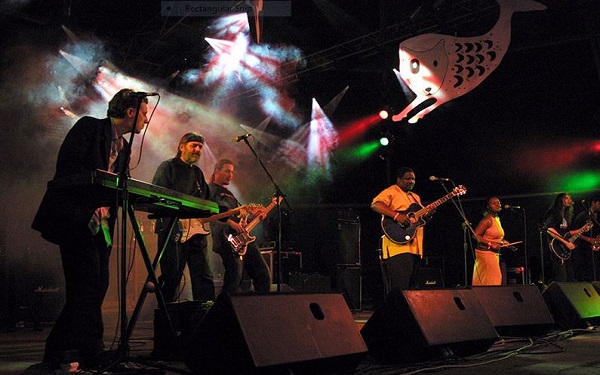 Considering the Oppikoppi music festival’s roots – a makeshift barroom stage atop a hill on a farm deep in the North West province – it has come a long way over two decades. It is now a fully functioning cultural juggernaut, embracing not just music, but a wide variety of South African pop culture touchstones: art, comedy, film and technology.

Much like the UK’s Glastonbury or one of the several American alternative music festivals like Bonnaroo or Lollapalooza, Oppikoppi holds up pretty well as movement and zeitgeist for the contemporary South African identity, for its youth at least.

What started with just a couple of counterculture heroes like Koos Kombuis and Valiant Swart with beat-up guitars on top of a hill playing to a couple of hundred people, Oppikoppi has now evolved into a full weekend of 150 acts, on seven stages that play a multitude of diverse genres: jazz, hip-hop, electronic music, folk and everything in between to 20,000 enthusiastic music fans.

Over the years, festival organisers have evolved a distinct character of diversity and collaboration, and sharing of ideas that speaks for and to the modern South African identity, offering audiences the stage to experience music they would have otherwise never heard of, or even considered.

Performers like Sipho “Hotstix” Mabuse, Karen Zoid and Waddy Jones (now famous as Ninja from rap group Die Antwoord), as well as DJs, rappers and electronica musicians, comedians and artists from all across the country, might never have found a new audience had it not been for the Oppikoppi platform.

Even in the festival’s early days, the role of Oppikoppi for many people was a way to discover new music and meet new kinds of people, share ideas and generally feel a part of what makes the country’s heart beat. Rockers found electronic music, reggae lovers found metal music and everyone embraced something different into their lives that significantly changed the way they looked at the world.

Above all else, at Oppikoppi, the music was all that mattered.

There has always a real sense of collaboration in music at Oppikoppi, teaming up some diverse artists to see what kind of magic could be created, and it always worked. Notable instances include one of the earliest and most memorable Oppikoppi partnerships of blues guitarist Albert Frost and Zimbabwean jazz guitar player Louis Mhlanga, who performed a riveting and rafter-lifting set at the bar stage in 1998 that is still regarded today as one of the greatest Oppikoppi moments ever.

“I’ve played there many times and it’s always been an incredible experience,” said African folk singer Vusi Mahlasela, one of Oppikoppi’s de facto spiritual leaders and vocal cheerleader for the festival on his travels around the world. Of his many appearances at the Oppikoppi, his most significant one was, ironically, not even at the Oppikoppi farm itself, but at the short-lived urban Oppikoppi experiment at Pretoria’s Fountains Valley resort, where he performed his set backed by Afrikaans rock icon Piet Botha and his band Jack Hammer in 2002. Heavy in unique musical improvisation and symbolism, the mash up of white rock music and one of SA’s melodic and unifying struggle voices culminated in a rousing version of James Phillip’s poignant Africa is Dying that had the entire audience in tears and on their feet.

No matter where the festival was held, Oppikoppi has always successfully mixed and matched, cobbled and constructed every kind of music and artistic expression into a giant mixing bowl of musical magic. Everything from blues with boeremusiek, drum ‘n bass and kwaito, folk with comedy. Artists of every calibre, from every genre and in every discipline, have made Oppikoppi their incubator for new ideas and new directions, making new friends and reigniting past creative passions.

It must be the dust, the grit of Africa between the teeth and the ruthless heat followed by majestic sunsets and long, raucous nights in the comradeship of feeling good. There is something spiritual about the place.

After the dust has finally settled, the hangovers cured and the road back home reluctantly trekked, for most ‘Oppikoppe’ the memories that remain and the ones remembered for years after, are the musical moments, the moments you will never see anywhere else in the universe, the kind of musical harmony that could only be borne out of South Africa’s most sacred musical real estate.

The legendary Vusi Mahlasela at the 2012 Oppikoppi Sweet/Thing festival with Karen Zoid, and Albert Frost.

From Africa to the World: A Celebration of African Culture on Beyonce’s #BlackIsKing