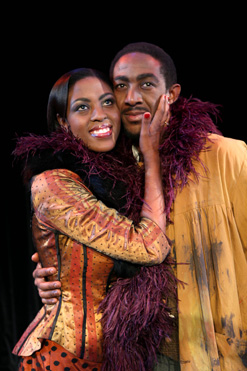 Sandra and Hein de Villiers’s passion for opera has led them to mortgage their house to fund a production – not once, but twice.

Sandra is the CEO of Opera Africa, the company she started in 1994 “with the vision of fostering new audiences for opera that were previously excluded from enjoying this genre, and to promote talented young soloists and choristers”. Hein has been Opera Africa’s artistic director since 1995. Like his wife, he brought with him a distinguished track record from more than two decades in music education, as both teacher and administrator.

Together with a band of similarly committed individuals – and, of course, some extremely talented performers, directors and visual artists – the pair have been the driving force behind staging a host of operas in South Africa over the last 15 years, including such favourites as Carmen, Faust, La Traviata and Aida.

The name of the company is usefully ambiguous; inserting different prepositions between the words “Opera” and “Africa” gives you some idea of both its ambitions and successes. For starters, there is the slightly contentious question of opera in Africa – does a Eurocentric high-art form such as opera have a place in post-apartheid South Africa?

Well, yes. First, there are musical and aesthetic strong affinities between opera and South Africa’s well-established choral tradition. Second, in an era of unprecedented globalisation and migration of cultures, there is little value in essentialising what it means to be “African” or “European”.

A fine example of such hybridisation is, in fact, Opera Africa’s Princess Magogo – the first full opera sung entirely in isiZulu. First staged in 2000, this is an opera about Africa, depicting the life and times of one of the Usuthu-Buthelezi dynasty’s most famous daughters, herself a renowned composer and singer, with a score by Mzilikazi Khumalo and libretto by Themba Msimang.

Princess Magogo and the company’s other productions have appeared across South Africa, in major urban centres as well as in more remote rural areas – opera for Africa, one might say. But they have also toured internationally, in cities as far afield as Chicago, Amsterdam and Oslo, demonstrating that there is such a thing as opera from Africa.

Opera Africa’s latest enterprise is La Bohème, which will run at the State Theatre in Pretoria in March 2010 before moving to the Joburg Theatre Complex in Johannesburg in April. (The company has established a good working relationship with these two major Gauteng theatres since relocating from Durban six years ago.)

La Bohème is, after Madama Butterfly, the most popular work by Italian composer Giacomo Puccini. Based on Henri Murger’s novel, Scenes from Bohemia, the opera is set in 19th-century Paris and centres on the love affair between Mimi, a seamstress, and Rodolfo, a poet.

Over the course of its 110-year performance history, La Bohème has contributed substantially to the modern archetype of the poor artist, struggling in a freezing garret to create immortal works of art but also finding ways to indulge in bouts of hedonism. This archetype has had more recent manifestations in, for instance, the Broadway musical Rent or Baz Luhrman’s film Moulin Rouge.

The themes of poverty and illness have obvious echoes in contemporary South African society. While previous Opera Africa productions have foregrounded such similarities by presenting “African” settings, however, the artistic team behind La Bohème have chosen not to do so here. Instead, the production will be “an exquisitely imagined period piece” taking for granted that the “universal and timeless themes” of Puccini’s opera will resonate with local audiences.

Andrew Verster, who has worked with Opera Africa as set and costume designer on numerous occasions, will again weave his visual magic, and Themi Venturas, whose Opera Africa repertoire includes Princess Magogo and the 2007 Opera Extravaganza, will direct the stage action.

Musically, the production promises to be of the highest standard. Conductor Timothy Myers, who has previously worked with orchestras in New York and London, will have the Johannesburg Philharmonic Orchestra under his baton. And the company has recruited a formidable group of divas and divos to give voice to the lead roles.

Soprano Hanli Stapela, joining Opera Africa for the first time, brings an international reputation to her reprisal of Mimi’s tragic story. Tenor Stéfan Louw, who has likewise been widely acclaimed for his performances in previous productions of La Bohème, will portray the equally unfortunate Rodolfo.

Two rising stars of the South African opera scene, Kelebogile Boikanyo and Aubrey Lodewyk – both products of the Tshwane University of Technology’s vocal arts programme – will sing the parts of Musetta and Marcello, the singer and painter whose tempestuous on-off relationship mirrors that of Mimi and Rodolfo. Otto Maidi completes a quintet of bohemian characters as Colline, the philosopher. Veteran bass Rouel Beukes will contribute his idiosyncratic combination of gravitas and levity to two roles: Benoit, Rodolfo’s landlord, and Alcindoro, the wealthy government minister who fancies Musetta.

And it’s worth mentioning that the production is sponsored by the National Lottery Distribution Trust Fund – so Sandra and Hein won’t need to mortgage their house again.