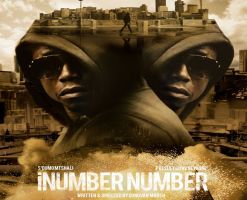 Casting real life gangsters in iNumber Number was a clever move; it turns the feature film into a believable slice of life that has caught the eye of Universal Pictures. The American movie studio has optioned the remake rights.

Casting real life gangsters in iNumber Number was a clever move; it turns the feature film into a believable slice of life that has caught the eye of Universal Pictures. The American movie studio has optioned the remake rights for the feature that opens in South Africa on 25 April 2014.

It’s a fast-paced action thriller, in which the characters spiral into an abyss of corruption. In the iNumber Number world, the idiom “If you can’t beat ’em, join em” translates into good cops turning really bad. Written and directed by South African filmmaker Donovan Marsh, this heist spine-chiller is independently produced and low-budget by Hollywood standards.

Speaking at the Toronto International Film Festival in 2013, where iNumber Number premiered, Marsh said he had no ambition for the movie to leave South Africa. “[It] was originally only intended as a launch pad for lead actor S’dumo Mtshali, who won Quizzical’s reality show, Class Act.”

But at the festival, it won plenty of praise for its superb acting, tense script and Marsh’s amazing action choreography and cinematography, all pulled off on a pittance of a budget. Now it is the first South African film that will be remade in Hollywood.

“The film was first accepted into the Toronto International Film Festival, which is one of the biggest film festivals in the world, and there it got noticed by XYZ films and they picked it up. And then they started shopping around Hollywood, and we actually had three studios who were interested in making the film, so there was a bit of a bidding war going on, which was quite exciting, and Universal Studios eventually won it,” Marsh told Smart Monkey TV, the South African web TV channel. It uses video clip interviews, e-letters and other elements to offer “interviews with people who know what they’re talking about for those who are curious”.

Chili (S’dumo Mtshali) and Shoes (Presley Chweneyagae) have been partners in the police force for eight years. After they make a risky arrest, their corrupt superior refuses to give them the reward they are due. Enraged, Chili realises that virtue does not pay and he sets about infiltrating a gang of cash-in-transit van thieves – against the better judgement of his partner. His scheme for a one-off score goes awry when the rest of the gang finds out his true identity. They take Shoes hostage and go through with the heist. Lured by the potential loot, but finding himself in the midst of a killing spree, Chili has a choice: either shake off his rage and cynicism to do the right thing, or indeed be really bad.

The film is populated by oddball gangsters that bring comic relief to the brutal thuggery, and the acting is superb. Chweneyagae appeared in the hit film Tsotsi, and Israel Makoe, Owen Sejake, Warren Masemola, Hlubi Mboya, Percy Matsemela, and Carlo Radebe are well known to South African television and theatre audiences.

Mtshali got the part after winning a TV talent competition, Class Act. “I made a TV show called Class Act, which is like Pop Idol but for actors, and we had this amazing winner, this guy called S’dumo Mtshali. He was voted in by the public at large and it was kind of my plan to create an audience for the movie. He won and his prize was to be in a feature film that I would write and direct for him.”

The gangster, both fictional and in reality, is Makoe (Skroef), who has been heavily involved in crime. He was arrested for the first time at the age of 14 for house breaking and theft. In 1996, he was sentenced to eight years in prison. While serving his time, he decided to form a theatre group called Abaqobi Drama Group.

iNumber Number was shot in Johannesburg and Soweto, but the remake will be set in Detroit and feature American stars. Marsh would love to see Dr Dre replace Mtshali in the lead role and Mos Def replace Chweneyagae.

It will be remade from scratch for the international market through Universal Pictures by the creators of the hugely popular Fast & Furious franchise, Chris Morgan and Emile Gladstone, with Aram Tertzakian of XYZ Films. Tertzakian’s partners at XYZ, Nate Bolotin and Nick Spicer, will be the executive producers.

“I’ve been in the industry for 20 years, but this definitely tops the list of achievements,” Marsh said. He will not write or direct the remake; instead, the studio and producers will seek a new writer. The original film was produced by Quizzical Pictures’ Harriet Gavshon as well as JP Potgieter and Mariki van der Walt.