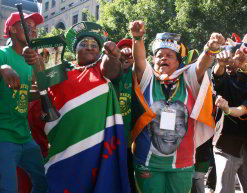 Springbok fans turned out in droves on 1
September to say farewell and good luck to
the national rugby team at an event in
Nelson Mandela Square.
(Image: Ray Maota)

Now that the Springboks have departed for New Zealand to do battle at this year’s Rugby World Cup, the call has gone out to South Africans to brush up on their rendition of the national anthem.

Sounds the call to come together,
And united we shall stand,
Let us live and strive for freedom,
In South Africa our land.

This is the official translated version of the national anthem. The first stanza is in isiXhosa and isiZulu, the second is in Sesotho, the third is in Afrikaans and the last stanza is in English.

The translation is as follows:

God Bless Africa
Raise high her glory
Hear our prayers
God bless us, we her children

Sounds the call to come together…

Brief history of the national anthem

In 1994 then-State President FW de Klerk proclaimed that South Africa would have two national anthems. They were the unofficial anthem Nkosi Sikelel’ iAfrika and the official The Call of South Africa, which also had an Afrikaans version titled Die Stem van Suid Afrika.

Die Stem van Suid-Afrika is a poem written in 1918 by CJ Langenhoven, and set to music in 1921 by the Reverend ML de Villiers. It was adopted as South Africa’s official national anthem in May 1957, five years after the English version had been accepted for official use.

The first verse and chorus, as well as the music, of Nkosi Sikelel’ iAfrika were composed in isiXhosa in 1897 by Enoch Sontonga, a Methodist teacher and lay preacher. Seven additional stanzas in isiXhoza were later added by the poet Samuel Mqhayi, and a Sesotho version was published in 1942 by Moses Mphahlele.

The song has since been translated into numerous African languages, including Swahili, and is a part of the national anthems of Zambia, Tanzania and Namibia.