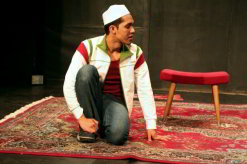 The cast of A Funny Thing Happened on the Way to the Forum, staged at the Wits Theatre in 2006. (Image: Wits Theatre)

If you find yourself looking to take in the latest act at London’s West End, don’t be surprised to find a poster of a South African production staring at you.

This is because the Wits Theatre, along with the national Department of Arts and Culture (DAC) and the British Council and Sustained Theatre UK has launched the SA New Plays Writing Programme.

A number of dignitaries, including arts and culture Minister Paul Mashatile, attended the launch, which took place at the Wits Theatre towards the end of January 2011.

Addressing the audience, Mashatile was optimistic about the success stories that would come out of the programme.

“We hope to discover new talent and open doors for many aspiring playwrights,” he said.

Mashatile also announced that DAC is planning to enhance the arts, culture and heritage sector’s contribution to economic growth and job creation this year.

The programme is the brainchild of Wits Theatre GM and stage veteran Ashraf Johaardien and Pervaiz Khan of Sustained Theatre and will comprise a number of writing workshops that will take place in Johannesburg and Cape Town.

According to a report by Jade Bowers of the Wits Theatre, the programme will allow writers in South Africa and the UK to share existing and new scripts as well as develop a process for the exchange of dramaturgical support.

“In collaboration with theatres and higher education institutions, the programme will also seek opportunities for sharing and co-production with a view to touring work, staging readings, showcases and creating opportunities for exchange,” said Bowers.


Siphiwo Mahala, director of books and publishing at DAC, believes the workshops would provide writers with the opportunity to develop new works and encourage them to pursue a career in play writing.

“We have a long history of theatre in South Africa but in terms of development of writing skills there has not been much investment.”

Mahala said that candidates will learn to write plays that could be staged in South Africa and then toured abroad.

“By collaborating with the UK, they would be able to take the plays there.”

Mahala added that the programme is not the first collaborative effort between DAC and the British Council, as there was an exchange programme for poets that took place in 2009.

Candidates were chosen by the Arts and Culture Trust last year, based on their writing potential and their interest in theatre. “Wits have the resources and saw the gap and thought they could provide the opportunity for these individuals.”

A total of 20 writers made it to the final selection, 10 in Johannesburg and 10 in Cape Town. They’ve already taken part in workshops in both cities under the tutelage of experienced South African and UK playwrights.