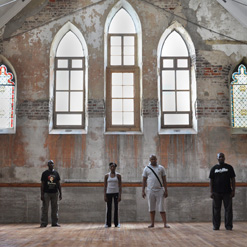 Members of Isango Portobello theatre
company at work in the rehearsal room of
the Fugard Theatre. The building’s former
incarnations are still in evidence, giving its
various spaces a creative “industrial” feel. 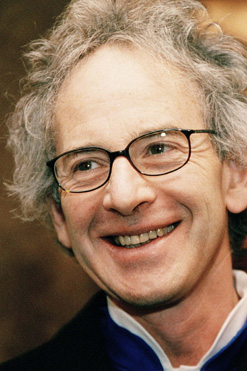 It’s true that the arts can flourish in poverty. The stereotype of the starving artist in a tiny garret is, however, a notion cherished only by the privileged, and perpetuated by films such as Moulin Rouge.

The reality is that few artists – actors, musicians, visual artists, even writers – could survive, let alone create, without patronage. But sponsorship of the arts is not always a priority in developing countries such as South Africa, where government funding is limited and big companies tend to regard spending on the arts as charity, not investment.

Nonetheless, usually with a little bit of start-up capital and a lot of imagination, South Africa’s artists manage to produce world-class material. Imagine the possibilities, then, when substantial sums are spent on new arts projects.

One such possibility recently became realised in February 2010, when the R18-million (US$2.5-million) Fugard Theatre in Cape Town’s District Six area opened its doors to audiences.

The theatre is named for South Africa’s legendary Athol Fugard, the playwright, actor, director and academic who was a pillar of the anti-apartheid theatre movement from the late 1950s to the 1980s.

Now a professor of drama at the University of California San Diego, Fugard’s novel Tsotsi was adapted into an Oscar-winning movie. His new play, The Train Driver, had its world premiere at the Fugard Theatre on 24 March.

The story starts back in the early 1900s, with the demolition of a Congregational Church building that stood a few hundred metres from the Castle of Good Hope, near what was then Cape Town’s foreshore. The location’s proximity to the harbour made it convenient for storage, and for the next hundred years or so the church hall – which had not been destroyed – was incorporated into the Sacks Futeran Building as a textile warehouse.

During that time, a history that is all too familiar to Capetonians was played out in the surrounding area. Land was reclaimed from the sea to the north and the foreshore extended to its present limit. The suburb of District Six, climbing the lower mountain slopes to the south, grew into a vibrant multiracial area. In 1966 the apartheid government declared it to be a whites-only area, and thousands of people were forcibly removed to the bleak Cape Flats 25 kilometres from the city. Since then, District Six was more or less neglected, even into the democratic era.

But fast forward to the present and you’ll see a process of urban regeneration underway. A fine example can be found on the block where the old church once stood: from the gabled stone façade of the church hall, between the Gothic arch forms of its windows, hangs a sign bearing a name that demands attention: The Fugard Theatre.

Inside, you’ll find a remarkable feat of architectural renovation. The lower level of the former church hall has been converted into a theatre foyer and bar area. Upstairs, there’s a bright and airy – but soundproof – rehearsal room that can also be used for functions.

The building’s former incarnations are still in evidence – the walls have been left as they were found, materials such as floorboards and fire-doors have been recycled, and stained-glass windows have been restored – all lending the various spaces a creative “industrial” feel. Climb another storey and you’re on the roof, with an exquisite 360° view of Cape Town’s City Bowl and Table Mountain.

And the actual theatre? This extends at a right angle to the old church hall, in what used to be a separate building that backs onto a different street (often enough, if you stand on the pavement below an open window, you can hear deep baritones harmonising with crystal-clear sopranos as performers warm up in the dressing rooms). A quick tour backstage reveals impressive facilities. But, of course, it is inside the narrow, three-tiered, 270-seater auditorium itself that the magic happens.

Impressive as it may be, a performance space is no good without performers. The Fugard will have no problems here: it was designed specifically to be the permanent home of theatre company Isango Portobello, which was formed three years ago through an unusual fusion of South African and British creativity and capital.

The Isango Portobello story also starts some time ago, but only as far back as the 1970s, when a young student named Eric Abraham fell foul of the apartheid authorities for his work as a journalist and anti-apartheid activist. He was placed under house arrest but escaped to England, where he became involved in theatre, film and television, founding the successful production company Portobello Pictures in 1985.

More recently he and his wife, well-known philanthropist Sigrid Rausing, expanded into the world of publishing with the establishment of Portobello Books and the acquisition of Granta in 2005.

DDK already had an international reputation through the award-winning film U-Carmen eKhayelitsha and the West End stage hit The Mysteries: Yiimimangaliso. Isango Portobello follows the same recipe that made DDK a social, commercial and artistic success: it draws performers predominantly from underprivileged backgrounds to create innovative fusions of Western and African cultural forms.

U-Carmen was an adaptation of Bizet’s opera to a South African township setting; The Mysteries revised and Africanised the medieval mystery plays once used to tell Bible stories to wider, illiterate audiences. The year 2007 saw the launch of The Magic Flute: Impempe Yomlingo and iKrismas Kherol, new versions of Mozart’s opera and Dickens’s novel respectively.

Of the two, The Magic Flute was the better received, and the achievement of Isango Portobello’s musical director Mandisi Dyantyi (along with Malefane, Nolufefe Mtshabe and Mbali Kgosodintsi) in reformulating the grand operatic score has been widely lauded. The orchestra consists of marimbas, drums and makeshift instruments such as glass bottles, and the magic flute becomes a trumpet. The production has toured internationally, garnering awards in the UK and France.

The Fugard opened in February with The Mysteries and The Magic Flute as a double-billing, to such success the run was extended into March. After this, the hydrolic stage, custom-built to accommodate Dornford-May’s signature style of directing his performers on a steeply raked stage, was lowered to prepare for the much-anticipated world premiere of the latest theatre offering from the eponym himself: Athol Fugard’s The Train Driver, starring Sean Taylor and Owen Sejake.

In the post-apartheid era, Fugard’s new plays – such as Victory and Coming Home – have been less well received than the clutch of iconic theatre pieces he produced from the 1950s to the 1980s. Local audiences are no doubt eager to see that trend reversed, and enthusiastic responses to the preview performances suggest that it will be. Yet Fugard doesn’t owe anything to South African theatre; if anything, the debt is the other way around.

The R18-million investment that is The Fugard Theatre goes some way towards paying an appropriate tribute.