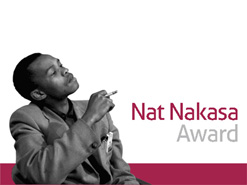 Named for Nat Nakasa, a prominent and respected South African journalist and writer who died in exile, this annual award recognises any media practitioner – journalist, editor, manager or owner – who has:

The award is open to all journalists from all media platforms: community, regional and national newspapers, magazines and online. Nominations close on 28 May 2010.

Previous winners of the award are, however, not eligible for entry. The winner will receive R20 000 in prize money and a certificate.

Past winners of the Nat Nakasa Award

The winner will be announced at the Nat Nakasa Award ceremony in Johannesburg on 24 July 2010.

If you know anybody who fits the definition above, please submit your nomination before 28 May 2010, accompanied by a motivation of 300 words, to: