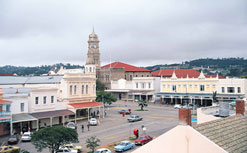 The university city of Grahamstown
is the venue for the annual National
Arts Festival. (Image: Isabel Schoeman,
South African Tourism) 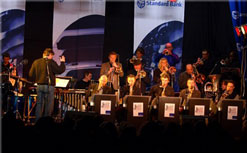 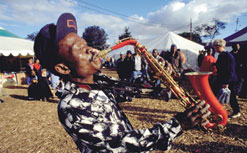 Known for pushing the boundaries of performance and visual art, the NAF attracts performers and arts enthusiasts from all over the world. The festival takes place under the auspices of the National Arts Council. With a programme featuring a wide range of arts disciplines, from jazz to exhibitions to craft, and from film to dance to opera, it offers something for just about everyone.

Thousands flock to the town to enjoy the talents of dancers, singers, musicians, actors, writers and poets, who perform on stage and in the streets, transforming Grahamstown for the duration of the festival into a diverse cultural hub.

The 2008 NAF is the 34th edition and not only sees an extra two days of festivities, but also a new director at the helm. Ismail Mahomed, the award-winning arts administrator, playwright, and former senior cultural specialist for the US Consulate, has taken over from former director Lynette Marais, who steered the NAF for two decades. Marais retires at the end of December 2008 and will work alongside Mahomed until then to ensure a smooth transition.

Internationally renowned soprano Sibongile Khumalo, chair of the festival committee, is clearly satisfied with the new development. “Ismail is not afraid to challenge convention and will add a great dynamic to the work of the committee,” she said. “We’re looking forward to engaging with him and taking the artistic side of the festival into a dynamic future.”

Those attending the 2008 festival can look forward to exciting performances such as For Letta – Sound of a Rainbow celebrating the life of veteran South African songbird Letta Mbulu, The Songs of Madosini with the Amici String Quartet, which combines Western classical music with traditional Xhosa instruments, the ballet Don Quixote, and a contemporary dance production titled Ozymandias, a collaboration between the Rhodes University-based First Physical Theatre Company and the John/Allen Project from Tulane University, New Orleans.

In 2010 the festival will overlap with the Fifa World Cup which runs from 11 June to 11 July 2010, but according to the Eastern Cape Department of Sports, Recreation, Arts and Culture, plans are in place to incorporate the two events. Facilities will be made available for festinos to watch World Cup games on big screens around Grahamstown so that those who support both football and the arts need not miss out on any of the action.

The Standard Bank Jazz Festival started in 1988 as a feature on the main programme and has developed into a top-class festival in its own right, bringing the world’s top jazz musicians to South Africa to perform cutting-edge music with their South African counterparts.

Performers from Sweden, Zimbabwe, Australia, Norway, Mozambique, Switzerland, Netherlands, Israel, the UK, and the US will take to South African stages in 2008. A number of these musicians also lend their talents to the Standard Bank Youth Jazz Festival as teachers. Here young performers get the chance to interact with 80 professional musicians and 40 jazz teachers and compete for the top honour of being selected for the Standard Bank national schools and youth jazz bands.

Not only does the festival entertain, it also educates through its Winter School, a programme of lecture series, panel discussions and seminars covering a range of topics. Respected intellectuals of the calibre of South African Human Rights Commission chair Jody Kollapen, high court judge Dennis Davis, charismatic strategist and author Clem Sunter, arts critic and academic Darryl Accone, and many more, will lead thought-provoking discussions.

In addition to the main programme, there is a packed fringe festival, a children’s art festival for youngsters between 4 and 13 years of age, and a craft market.

The NAF, arguably Southern Africa’s leading arts festival, is held in one of South Africa’s most historically significant areas, the picturesque university city of Grahamstown. Students from the journalism school at Rhodes University publish the official festival newspaper called Cue. Once the second largest town in South Africa after Cape Town, Grahamstown has grown over the years into one of the country’s major cultural and educational centres.

Located about 110km south-west of Bhisho, the capital of the Eastern Cape province, Grahamstown was established by Lieutenant-Colonel John Graham in 1812 as one of a group of military outposts situated along the Fish River, to assist British efforts to colonise the region and secure it against the amaXhosa.

A small town developed around the military outpost but by 1814 it was big enough for the governor to proclaim the region a magisterial district in its own right, named Albany. In 1819 the Xhosa prophet Makana assailed the town in response to a British raid on Xhosa cattle stock. Full of confidence, the amaXhosa sent their traditional warning to the British the day before the attack: “We’ll breakfast with you tomorrow”.

However, amaXhosa numbers were no match for British artillery, and after suffering high numbers of casualties Makana surrendered and was imprisoned on Robben Island where he later died while trying to escape.

The Battle of Grahamstown, known as eGazini or “Place of Blood”, was the culmination of years of conflict between British settlers and the amaXhosa. It is one of South Africa’s more significant battles because it was fought for outright dominance of the region. Had the British lost, say historians, they would have withdrawn and the Eastern Cape would have looked very different today.

However, the British went on to establish a solid presence in the area. The 1820 settlers, a group of around 5 000 British immigrants, encountered much hardship on their farms and eventually drifted towards the fledgling town, bolstering its population and giving it the distinctly colonial influence seen today in much of its architecture. In fact, Grahamstown is said to be one of the best preserved Victorian towns outside of England.

With the founding of Rhodes University in 1904, Grahamstown became an important educational hub not only for the region but for the country, an attribute that it holds to this day. Around this time the Eastern Cape became an important centre of missionary activity and with more than 50 churches of various denominations, Grahamstown has earned itself the nickname of City of Saints.

The city has also gained a name for itself as an important legal centre, with a magistrate’s court and the law school at Rhodes, and it has been the seat of the Eastern Cape division of the Supreme Court since 1864.