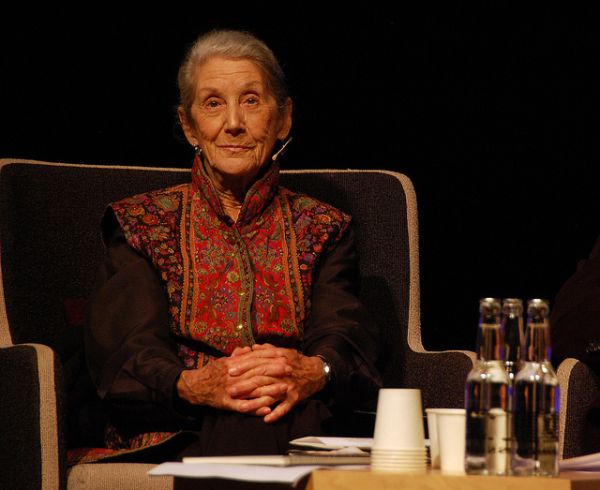 “Writing is making sense of life. You work your whole life and perhaps you’ve made sense of one small area,” Nadine Gordimer (Image: Läranas Nyheter)

“Learning to write sent me falling, falling through the surface of the South African way of life,” Nadine Gordimer once said. For more than 60 years the daughter of Latvian immigrants wrote about the country she lived in and loved.

Gordimer, who died at home surrounded by family on Sunday 13 July 2014, lived her life by a simple rule – “courage in one’s life and talent in one’s work”. Her elegant prose and crisp writing style earned her literary plaudits – including the Nobel Prize for Literature in 1991 – and banning orders from the apartheid government.

She was always, physically, small; seemingly frail and ethereal, but in her literature she stood tall, tackling the everyday slights that pushed people to make the choices they did. Her writing – fiction and nonfiction – explored what it meant to be South African. As she explained to Guardian journalist, Justin Cartwright, “You are formed by your social enclosure and you are always growing. To be a writer is to enter into public life. I look upon our process as writers as discovery of life.”

A new world in books

Gordimer grew up believing that a bad heart made it impossible to become the dancer she dreamed she would be. Instead she found a new world and a new dream in the pages of the books she took out of the Springs Public Library, in the small mining town in which she grew up. Reading, and later writing, gave her an escape from the town’s provincialism, she would tell students, but the greatest gift her parents gave her was that of solitude. “My parents gave me the best gift a young writer can get, they left me alone. Writing became the scene of my greatest activity and my only discipline.”

Her clear, controlled and restrained writing has won her comparisons to authors as diverse as Alice Munro, Gabriel Garcia Marquez and Jane Austen. Unlike Austen though, she thrilled in writing about the world outside her comfort zone, even if she was accused of writing from the safety of a white middle class home. In her own way she took risks with the position she found herself in. “You somehow watch that edge, and I was lucky I didn’t fall over it. Perhaps I wasn’t brave enough. Perhaps I should have done more. But the risks I took I got away with.”

No Time like the Present, Gordimer’s final work, was published in 2012, the last of 14 fiction titles produced over six decades. Her first novel, the semi-autobiographical The Lying Days, was published in 1953. Among the awards Gordimer amassed throughout her life was the 1974 Booker Prize for The Conservationist and honorary degrees from Cambridge, Yale, Harvard and Belgium’s University of Lueven. In 2007 the French honoured her with the French Legion of Honour.

Throughout her writing career she was criticised, in South Africa, as being the voice of liberal guilt; a writer whose career should have ended with the release of Nelson Mandela. Instead the gutsy author with the razor-sharp wit continued to write, including critically of the fallings of the new government. She did so because she believed strongly that as an artist she had the responsibility to hold up a mirror to society.

Nelson Mandela, a fan, once said that Gordimer’s writing taught him a great deal about the white liberal sensibility. More importantly, Mandela was a fan because Nadine Gordimer was one of South Africa’s greatest writers. She was, as he said in June 1996, a writer, “whose writing was enriched by the cultural kaleidoscope of our country”.