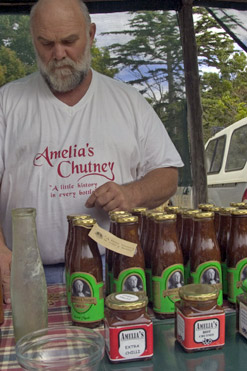 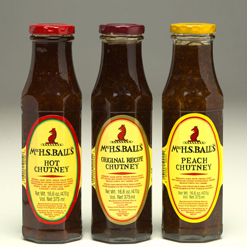 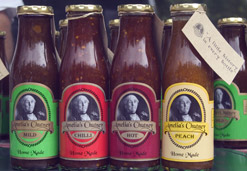 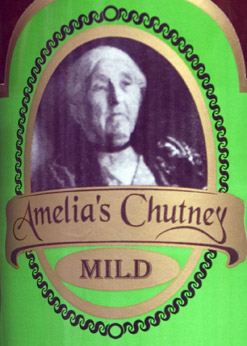 A picture of Amelia Ball on the original
recipe chutney.
(Image: Jennifer Stern)

For South Africans abroad, there’s nothing quite like the taste of the mother country to bring on a wave of homesickness. Ouma rusks, Chappies bubble gum, biltong and boerewors are all sold in speciality shops across the world for the South African expat community. And probably the most iconic taste of all is that of Mrs HS Ball’s Chutney.

Manufactured in Johannesburg and exported to the UK, Australia, New Zealand and Germany, the chutney is a slightly sweet and spicy sauce made from apricots and peaches.

It’s an essential accompaniment to a good curry or braai, it’s great on cheese sandwiches, and bobotie is unthinkable without it.

Like many icons, it has its mythology, not all of which is true. According to Desmond Ball, the great-grandson of the original Mrs HS Ball, the real story is a little different from the version to be found on Unilever’s website.

According to Ball, it all started in 1852 when Henry James Adkins married Elizabeth Sarah Spalding in King William’s Town, settling in the nearby village of Fort Jackson to run a general dealership. He was a pretty humble man, Desmond says, not a ship’s captain, as the Unilever website claims, and the couple were never romantically shipwrecked together.

The Adkinses had seven sons and four daughters, one of whom was Amelia. Amelia married Herbert Saddleton Ball, a superintendent on the railways, and they moved to Johannesburg – taking her mother’s chutney recipe with her.

On HS Ball’s retirement the family moved to Cape Town, where Amelia started producing her mother’s chutney on a home-industry scale.

“She was a tough old cookie,” says Desmond. “She had seven children, Herbert Saddleton Junior, Thomas, Clemm, Henry (who was called Harry), Harold (who was not called Harry), Ernest, and Mildred – the only daughter. Thomas died young.”

The Balls moved to the pretty coastal town of Fish Hoek, building or buying four houses within walking distance of each other. Mr and Mrs Ball senior lived in one, and sons Harold, Harry and Ernest in the others with their families. Here Mrs Ball started increasing her production. Meanwhile, her sister Florence and brother Harold carried on making Adkins Chutney, which they had inherited from their mother.

“It caused quite a lot of strife,” says Desmond. “Here were these two sisters, both making chutney, in direct competition with each other.”

The power of marketing

Amelia’s husband would take a few bottles every day by train into Cape Town to sell. It was on one of these sales trips that he met Fred Metter, a food importer. Metter started marketing the chutney, and improved sales so much that production could not be accommodated in the Fish Hoek house. The factory was moved three times, each time to bigger premises, eventually ending up in Diep River.

The youngest son, Herbert Saddleton Junior, sold his share of the business to Metter, who again increased sales to such an extent that the factory moved for the last time to bigger premises in Retreat. But it remained a family business, with the three brothers Harry, Harold and Ernest retaining their share.

“I used to go to the factory and work in the holidays,” says Desmond Ball. “Edward Ball, my uncle, was the manager. He is now 82. And he made chutney from the time he left school. That’s all he ever did.

“In those days we only made the original recipe. There was only one flavour. But my uncle Harry liked things with a bit of a bite. I remember him crushing a chilli and putting it into the chutney to make it a bit hotter and that’s how Mrs Ball’s Hot Chutney came about.

“Then Fred Metter decided that peach chutney would sell,” says Ball. “So we added that to the line-up. It’s milder and sweeter.

“When the main shareholders started getting on a bit, they sold the business to Brooke Bond Oxo, who later sold it to Unilever Foods, who still own the brand today.”

Meantime Florence and Harold had sold Adkins Chutney to Warne Bros, who later sold it to Iona Products, and it finally went out of production in the 1970s. It was all a question of marketing. Same recipe, same chutney, but different brands. Adkins has been lost to memory, and Mrs Ball’s is a household name across the world.

Desmond Ball still lives near Fish Hoek, where, he says, “People would stop me in the street and say the chutney doesn’t taste the same. They’ve changed the recipe.

“We’ve been making chutney for five generations, and I want to keep the family tradition alive,” he says.

Giving in to the demands of his neighbours, Ball dug up the old family recipe, kept from his days working in the factory as a boy, and started manufacturing on a small scale and selling it at the Porter Estate Produce Market in Tokai and the Triangle Market in Fish Hoek.

“I make the original recipe, the hot and the peach,” he says. “And I also make a hotter chilli one, too. People’s tastes have changed and a lot of people like really hot stuff now.”

Ball has called his chutney Amelia’s Chutney, in honour of his great-grandmother.

“A lot of people don’t realise she was a real live person,” he says. “That’s why I’ve put her picture on my bottle, so people can see what she looked like.”

Amelia Ball died on 11 November 1962, at the age of 97. But her name lives on – on the millions of Mrs HS Ball’s Chutney labels, and on the less ubiquitous Amelia’s Chutney. Her descendants are determined to keep the legend alive.