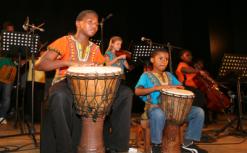 Members of the Hout Bay Strings Project.
Moshito works on behalf of musicians
to address issues such as piracy and the
growth of a live performance circuit.
(Image: The World Bank) 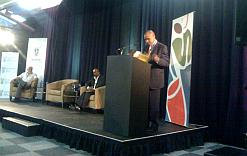 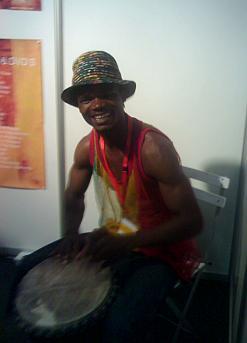 A performer from the Nokwe Creative
Development Foundation entertaining
visitors in the Moshito exhibition area.

Moshito, South Africa’s premier music conference, celebrates its fifth anniversary in 2008. The conference opened on 10 September, with Arts and Culture Director-General Themba Wakashe and Moshito chair Arnold Mabunda expressing confidence that this year’s event will be the best yet. Moshito takes place in the cultural precinct of Newtown, Johannesburg.

2008 saw Moshito entering into a new relationship with Womex, globally regarded as the premier platform for world music. Moshito is one of several partners, known as Womex offspring, in countries around the world who work with Womex to tailor a local event to the precise needs of a specific audience and market.

In addition, the Moshito exhibition features a wide variety of private and public organisations from the South African music industry, from record companies to software to new technology. A listening booth allows up-and-coming artists, producers and songwriters the chance to play their demos for industry professionals. Finally, the live music component includes a number of concerts at venues around Newtown, featuring fresh South African talent.

In 2008, audiences can look forward to international speakers such as Womex director Gerald Seligman from the US, CEO of the UK-based Association of Independent Music Alison Wenham, president of the Brazilian Association of Independent Music Roberto Carvalho, festival organiser Many Ansar from Mali, Rulu Arts Promoters director Charles Muyimba from Tanzania, concert producer Hans Hjorth from Sweden, and Rubber Records MD David Vodicka from Australia.

Discussion topics range from more efficient organisation of festivals to new formats and trends in promoting, marketing and selling music, to compliance with and enforcement of intellectual property rights, to strategies for survival in the digital age.

Moshito launched in 2003 as a vehicle to address a number of pressing issues in the South African music industry, among them increasing piracy, the development of music markets for South African music, particularly abroad, and the need to create proper social benefit and welfare structures for musicians.

Its strategies include broadening the business intelligence of industry members, strengthening relevant business networks and creating opportunities and platforms for South African music at home and abroad. The organisation works with a number of South African music associations and unions to shape them into a cohesive group, and also collaborates closely with local and provincial government and the national Department of Arts and Culture (DAC).

The DAC has identified the music industry as one of its priorities. “We want to ensure that the creative industries are developed way beyond the 21st century so that they can realise their potential of contributing substantially to the economy,” said Arts and Culture Director-General Themba Wakashe, delivering the opening address at Moshito 2008.

Wakashe said that culture in general is a vital tool for social cohesion as it is a source of national pride, and is a key provider of jobs and income as well as an important contributor to the country’s economy that should not be overlooked.

“Our involvement in Moshito is part of government’s broader plan to grow the local music industry,” he said. “South African music should become globally competitive, and for that we need capacity and a solid base of highly informed participants.”

Speaking at the opening of the event, Moshito chair and music industry stalwart Arnold Mabunda said that the challenges encountered in growing the local music industry are continually offset by progress and achievements.

He named several Moshito milestones, starting with the expansion of the conference to include the music exhibition in 2004. The very next year saw Moshito exhibiting at the South African pavilion at Midem, the world’s largest music industry trade fair, held annually in Cannes. In 2006 two important local bodies came into being – the Association of Independent Record Companies, and South African Music Exports which represents exporters of local music.

Mabunda added that the partnership with Womex has enabled Moshito to source more international speakers who share their experience and expertise with local practitioners, particularly in the digital arena. Moshito, he said, has become a recognised forum where issues are aired, thrashed out and resolved, connections are established, and South African music gets its chance to shine.

“We have delegates coming from around the country and overseas and also quite a few from Africa. They all come from a broad section of areas of the music industry and Moshito gives a rare chance to meet face-to-face and find ways of working together.”

South Africa’s music industry, with other so-called creative industries, is South Africa’s fifth-largest economic sector and not only generates revenue, but creates job opportunities. The entire scope of the creative industries, according to the DAC, is worth about R7.4-billion ($920-million), and more than 100 000 people are employed within film, television and music.

Minister of Arts and Culture Pallo Jordan said that the South African music industry has the potential to become a major foreign exchange earner and job creator, provided its potential is maximised and its products marketed aggressively at home and in the international music market.

Speaking at the inaugural conference of the Creative Workers’ Union of South Africa in September 2007, Congress of South African Trade Unions General-Secretary Zwelinzima Vavi said, “The core of the South African music industry employs approximately 12 000 people, of which the majority are artists and composers. The gross turnover of the core of the industry is approximately R900-million ($111-billion), with experts estimating that the entire industry is worth R2-billion ($248-million).” The turnover figure named does not include digital sales of music.