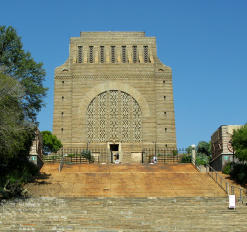 The Voortrekker Monument was awarded national heritage status in 2011. 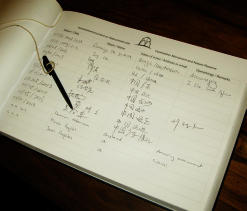 The guest book is filled with comments from Chinese and other visitors. 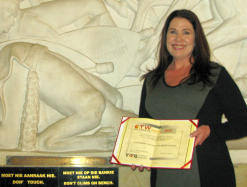 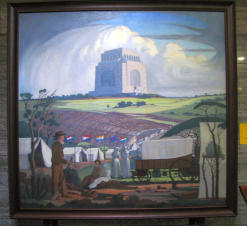 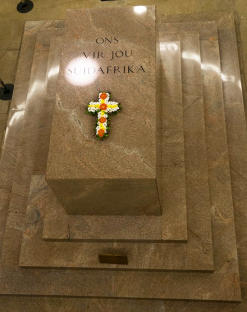 Every year at 12 noon on 16 December the sun’s rays fall upon the words inscribed on the red granite cenotaph.
(Image: Voortrekker Monument)

The Voortrekker Monument is a firm favourite with the fast-growing Chinese tourism sector, and this year was awarded the big prize at the China Outbound Tourism and Trade Market (COTTM), held in Beijing in April.

As China’s only business to business exhibition dedicated to the Chinese outbound tourism and travel market, COTTM is not open to consumers but instead gives tourism-related businesses from other countries the chance to reach professionals in the Asian sector. This year’s event, the ninth, was the biggest ever, according to organisers, with 275 exhibitors from 60 countries showing off their products to 4 137 outbound tour operators from all over China.

Awards were given in five categories – technology, innovation, quality, marketing, and overall performance – and in three tiers of bronze, silver and gold. The Voortrekker Monument was the gold winner for overall performance, the best of the best. Hospitality group Tsogo Sun, formerly Southern Sun, received a bronze award in the innovation category.

This is not the monument’s first award, and not the first COTTM one either. In 2009 it received a bronze COTTM award and, says its MD Sonja Lombard, despite the fact that there is a rule that an institution may not be awarded twice, the organisers made an exception in 2013.

Almost half of all Chinese visitors to South Africa come to the monument, says Lombard. And 45% more Chinese tourists visited the monument in 2012 compared with 2011. “It’s a huge market,” adds Lombard, who flew to Beijing to receive the award. “The World Tourism Organisation [WTO] predicts that by 2015, the Chinese outbound sector will be the world’s biggest – it will surpass the current leader, the US.”

China’s National Tourism Administration agrees, giving an estimate of 100-million outbound Chinese tourists by 2015. This is attributable to the country’s growing middle class, a relaxation in foreign travel restrictions, and improved transport links to major centres within China. The current market is said to number around 70-million travellers – some 18-million more than the entire population of South Africa.

The nation has been the fastest growing market in the last 10 years in terms of tourism expenditure, and in 2013 overtook Germany to claim the title of the world’s biggest spenders in travel. The WTO says that in 2012, Chinese tourists spent 41% more on foreign travel than the year before – they shelled out US$102-billion (R920-billion), more than the $84-odd-billion (R758-billion) from both German and US travellers.

Lombard’s goal is to capture that lucrative market and tap into its potential.

“The Chinese tourist travels for two main reasons – culture and shopping. Cultural tourists want a quality product, which we can offer. Because you have to know your client to keep them coming back, we’ve tailored our offerings to suit this market.” Monument staff go out of their way to make Chinese tourists feel welcome, overcoming the language barrier with signage and booklets printed in Chinese to make it easier for them to learn about the monument’s heritage.

“They appreciate its cultural aspects. We know that on average, we have an hour of their time so we aim to give them an exceptional experience. That way they’ll take their fond memories of the monument back home with them and spread the information in photos and by word of mouth.”

Since 2007, the monument’s website has been available on the Chinese internet – access to foreign websites is generally difficult from inside China. The website, which is published in Chinese, is maintained by Chinese Business Network, which also promotes the monument at shows within the country.

In the coming months, Lombard and her team will focus on marketing the monument in China’s and South Africa’s fellow Brics countries of Russia, India and Brazil, building on the winning business model that they’ve established so far.

Symbol of a freedom struggle

The Voortrekker Monument stands on Monument Hill just outside Pretoria, and was opened in 1949, a year it shares with the founding of the People’s Republic of China. It’s run by a private company and despite receiving national heritage status in July 2011, is still relatively sidelined in terms of government funding although “it’s high up on the City of Tshwane’s brag list”, says Lombard.

“This means that we have to be creative in our marketing efforts. Our government grant is R2-million [$222 000] compared to the R55-million [$6-million] that Freedom Park, on neighbouring Salvokop Hill, gets.”

The monument’s rep also deserves an overhaul, she states. It’s no longer the symbol of Afrikaner dominance in South Africa, but on closer inspection, is seen to incorporate diverse African influences in its design. They include Egyptian inspiration in the chevron pattern on the floor of the main hall and in the deliberate use of the sun’s rays, which on 16 December every year fall on a red granite cenotaph on the level below the main hall, as an architectural feature; a fence and gate formed from upright assegais or Zulu spears, representing the powerful Zulu chief Dingane blocking the trekkers’ access into the interior; wildebeest, symbolising the dangers faced by the Voortrekkers on their journey into Africa; and a buffalo head over the main entrance, honouring the highly successful Zulu war tactic of attacking in a horn formation.

“The monument does carry baggage – it was used to promote an unacceptable political agenda in the past, but we want to break away from that and position it as a symbol of the country’s earliest struggle for freedom from colonialism. In this respect it complements Freedom Park, which features another, later side of the freedom struggle.”

The two remembrance sites maintain separate identities but their management teams co-operate closely on various aspects such as marketing each other and sharing events. A road built between the two hills, known as Reconciliation Road, was opened in December 2011 and is viewed by many as symbolic of bridge-building between cultures in democratic South Africa.

“Reconciliation will succeed if it is a two-way process,” said President Jacob Zuma at the ribbon-cutting ceremony. “The initiative symbolises commitment to reconciliation, social cohesion and nation building principles as well as a willingness to exchange ideas and learn from each other.”

Lombard says that the co-operation between the two sites shows that it’s not necessary to sacrifice one’s own culture to celebrate that of someone else. “We’re proudly Afrikaans, but also proudly South African. You’ll notice that the cenotaph is inscribed with the words ‘We for you, South Africa’ – not we for you, Afrikaner nation. By visiting both Freedom Park and the monument visitors get a broader perspective on South African history.”

In fact, she adds, the number of visitors crossing Reconciliation Road to Freedom Park from the monument has increased, and the number of schoolchildren from black schools visiting is also on the rise. The Voortrekker Monument caters for the whole family; it is situated in a nature reserve and offers walking and mountain bike trails, horse riding, a rollerblading track, skateboard speed skating, picnic areas, three restaurants, and an affordable day’s entertainment.