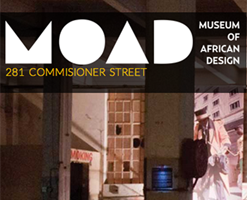 Innovation, creativity, diversity and artistry are the watchwords driving the Museum of African Design (MOAD), a rather unusual space that embraces the avant-garde.

Located in a refurbished 1930s art deco building in the Maboneng Precinct, on the eastern edge of the Johannesburg CBD, Moad is a pan-African platform for contemporary craftsmanship. Opened in October 2013, it fuses modern inner-city vogue and the harsh grit at the centre of the City of Gold. Once a factory that churned out parts for the mining industry and later a garage for vehicle repairs, the neglected old building was falling into disrepair.

But the high ceilinged warehouse has since been transformed into a bespoke contemporary space to house and exhibit Africa’s most avant-garde design ideas. The renovated gallery is 2 500 square metres in size, and is believed to be the first of its kind on the continent. “I actually didn’t realise that Moad was a first on the continent until well into the planning phase,” explains Aaron Kohn, the director of. “[Maboneng] Precinct is, in many ways, South Africa’s Design Neighbourhood, so the spot made sense for a number of reasons.”

“More interesting perhaps, was that museums in Africa are largely dedicated to preserving local culture and heritage – and when they’re competing with buyers in New York and Paris, they’re limited. Then galleries are more interested in going to Frieze or the Armory and selling abroad, than in showing within the continent. So Moad has always consciously been interested in creating a space that artists and museums would be excited to collaborate with, within the continent.”

Kohn adds: “The goal for it is really to become a cultural hub, a place to showcase what’s [happening] on the continent that’s innovative, but also to encourage that kind of thinking, design and creativity to young South Africans and to people visiting Johannesburg at the same time.”

In creating Moad, the developers added an extra floor, bathrooms and a cocktail bar, but kept the building’s integrity largely intact. “Raw floors, metal bars and scaffolding ramps still dominate the three-level space, creating a rough-edged atmosphere that echoes the identity of the building and its urban surroundings.”

The space will continually be refined, but Kohn maintains that the goal is to leave it as original and industrial as possible. “It looks like it will end up being a maker-space/hacker-space to teach design, engineering and innovation. There are a number of incubators and tech-focused co-working spaces in Johannesburg and around Africa, and we are involving as many people as we can to build this initiative.”

It has already hosted exhibitions, with visitors agreeing that it is more than a gallery space. It dedicates itself to uncovering, encouraging and sharing design growth through large-scale unified temporary exhibitions.

Kohn, an American, explains that he connected with Maboneng because he spent a lot of time in the area when he was an exchange student, and while co-founding African Lookbook with Phil Sandick. Lookbook is an online presence “for discussion revolving around oral histories and products in an online shop”. It connects designers and artists in Africa with shops, galleries and curators around the world.

“I ended up here with a strange obsession with Africa, which started off thinking I could be the white saviour from America. Y’know, do a lot of good,” Kohn says. “And along the route of disillusionment, I started hanging out with a lot of artists from across the continent. I started studying African art and spent a lot of time in Johannesburg.”

He has no formal training in design, but has a passion for African studies, which he studied first in New York, and as result became interested not only in design, but specifically African design.

“African Lookbook was created out of a desire to not only provide contemporary African threads online for purchase, but to also build a space for the important narratives behind those creations. Part documentation of African artistry, part online shopping gem, African Lookbook is garnering attention from folks interested in unique products with a story,” Kohn explains.

“The building that houses Moad has been called Moad since it was acquired in 2011 by the Maboneng Precinct, but it was only about a year ago that I started talking to them about how to turn it into an operational museum.”

Kohn says that in future, the museum will work with different people for every exhibition. Moad is not interested in becoming a collective institution that stores art or wastes any budget on insurance and acquiring fees, he stresses. “We want to focus on the most exciting and relevant exhibitions that we can put on with works from across the continent.

“I think that’s a new model that a lot more institutions around the world are looking at in terms of not having necessarily conventional museum staff, not having a permanent collection. It allows an institution that’s interested in the contemporary to stay contemporary.”

He aims to get South Africans interested in Moad, with the hope that they will become more interested in museums in the rest of the country. “South Africa has no shortage of museums, yet they’re essentially neglected. This is part of a global debate where we have to think of new ways to get people through our doors; we have to change the perceptions of museums.”

He concludes: “It’s fitting that a design museum be in an old factory, because that is where things are made. On the one hand, it’s challenging because there are no white walls, but on the other hand, the space is rugged and we can do pretty much anything we dream up inside.”

In October 2013, Moad presented the annual showcase of the Southern Guild design collection. Over 200 works from more than 100 of South Africa’s leading designers and artists provided a detailed and contextualised view point on collectable, limited edition design.

The following month, Google teamed up with the makers of KitKat chocolates, Nestlé, to create an exhibition of 3D printed chocolate sculptures for the Chocnology exhibition. It was intended to celebrate the launch of Google’s latest operating system.

Moad’s first full-length exhibition, Native Nostalgia, runs until 9 February. A group exhibition, it is an exploration of nostalgia in five African countries – Senegal, Nigeria, Algeria, Benin and South Africa. The works on show tell the stories of bygone eras, but positions them firmly within present day narratives. “Through architecture, construction, cartography, photography, communal archives, and historical re-enactment, each artist and participant has a conversation with a past through which they did not live by juxtaposing design elements with those of today,” explains the gallery.

Moad is at 281 Commissioner Street, Johannesburg.