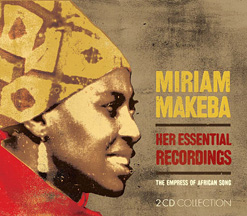 Iconic jazz singer Miriam Makeba is immortalised in the minds and hearts of people across the globe who will remember her as a charismatic performer, a fervent anti- apartheid activist and an export who maintained her African identity.

Makeba, 76, suffered a fatal heart attack on Sunday 9 November in a clinic in Italy shortly after a performance in the southern Italian town of Caserta. That final concert was a tribute to Roberto Saviano, a writer whose life is being threatened by the Italian mafia for his written indictments of their activities.

Mama Africa, as she was affectionately known over the years, was born in Johannesburg in1932.

“People gave me that name. At first I said to myself: ‘Why do they want to give me that responsibility, carrying a whole continent?’ Then I understood that they did that affectionately. So I accepted. I am Mama Africa,” she said in a 2005 interview with French news agency AFP.

With her powerful voice and signature combination of jazz and South African township rhythms, she was also often referred to as the “Empress of African Song’’.

She began her professional career as the vocalist for South African group The Manhattan Brothers while they toured internationally in the late 1950s, and later formed her own group, The Skylark.

During this time she also starred in several musicals, but it was her performance in the anti-apartheid documentary Come Back Africa that gave her her first big international break. An invitation to the premier of the film in Italy paved the way for her ensuing stay in London, where contact with influential music industry players saw her sign a record deal and release songs such as “Pata Pata,” “The Click Song” (“Qongqothwane” in Xhosa), and “Malaika” that today are instantly recognised as hers. In her lengthy career went on to release more than 20 albums.

Although she saw herself as a singer and not a political activist, her outspoken participation in anti-apartheid activities made her an icon of the struggle. In 1960 her South African citizenship was revoked by the South African government, and she spent the next three decades in exile in the US and Europe. After testifying at the UN Special Committee on Apartheid in 1963, calling for an international boycott on South Africa, even her songs were banned in the country.

“Throughout her life, Mama Makeba communicated a positive message to the world about the struggle of the people of South Africa and the certainty of victory over the dark forces of apartheid colonialism through the art of song,” said South African Foreign Affairs Minister Nkosazana Dlamini Zuma on her passing.

In 1990, with the advent of democracy and South Africa’s policies becoming more acceptable internationally, Makeba was persuaded to return home. She soon became immersed in performing and took on the role of the mother of Sarafina in the hit movie of the same name, which dealt with the 1976 Soweto Uprising.

In 1966 she became the first black African to win a Grammy Award, for Best Folk Recording. The winning song highlighted the plight of South Africans living under apartheid together. Her 2000 album titled Homeland earned her yet another Grammy nomination in the Best World Music category.

Makeba served as a goodwill ambassador for South Africa and won several awards for her contribution to peace. Among them was the Gold Otto Hahn Peace Medal by the United Nations Association of Germany in Berlin.

“It was accordingly befitting that with the dawn of peace, democracy and justice in South Africa, our government saw it fit to appoint her goodwill ambassador of our country through which she continued to communicate a positive message to the world about developments in South Africa,” said Dlamini Zuma.

“In this context, the Ministry Foreign Affairs will miss her invaluable contribution to efforts aimed at projecting a positive image of our country abroad.”

Makeba officially retired from the limelight following a worldwide tour in which she visited all the countries she lived in during her exile. In her lifetime she had nine passports and was made honorary citizen of ten.