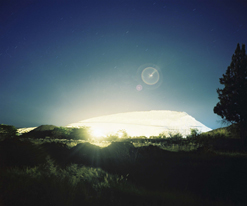 An otherwordly image of a mine dump in
the town of Welkom, from Natasha
Christopher’s photographic exhibition
“Mine”. 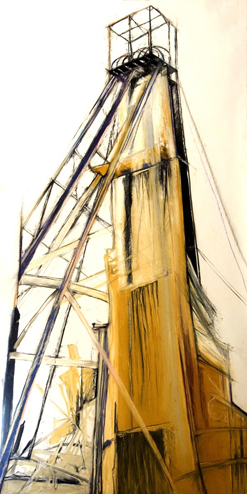 A work from Jeanette Unite’s “Headgear”.

For better or worse, South African history over the last 120 years has been closely tied to its mineral wealth – more specifically, to the extraction of that wealth by a combination of entrepreneurial energy and worker exploitation.

The mining industry has iconic images: the hard-hatted miner operating by torchlight, the lift carrying workers thousands of metres underground, gleaming gold bars emerging from a furnace. Yet each of these is an ambiguous symbol, suggesting both a proud heritage of engineering feats and economic growth, and a shameful history linked to race- and class-based oppression.

The visual arts offer one way of exploring such ambiguities, as recent and current exhibitions by two South African artists demonstrate.

First, at the Standard Bank Gallery in Johannesburg, there is Natasha Christopher’s “Mine” (running concurrently with a retrospective of Ephraim Ngatane’s paintings). The title of the exhibition is suggestive – it refers not only to the literal mines that dominate life in the town of Welkom, where Christopher grew up, but also to her sense of belonging in the place: to her, it is “my home town”. Each return there, she says, is “a foraging, an extracting, a catharsis”; by taking photographs of sites from her childhood, she engages in a metaphorical mining of her memory.

In these photographs, we see not only the public side of mining life on the outskirts of Welkom but also the private, domestic spaces within the town. What is documented seems to be a crumbling, desolate space. It is strangely empty of people, and the only signs of recent human activity or occupation are an abandoned toy bicycle and a lonely cat. (This is in stark contrast to the vibrant, populated township scenes in Ngatane’s oils and watercolours.) Close-up shots of interior furnishing in the houses reveal a style of décor that seems stuck in the 1970s and 80s.

The photographs are supplemented by other installations and audio cues: a stained mattress hangs in a glass case, offsetting the clean and bright gold leaf that covers another display case. A soundtrack of birds chirping and gentle suburban background noise introduces a note of tranquillity despite the heavy industry – and a number of the photographs, showing different forms of foliage, prove that nature is resilient.

Nevertheless, mine dumps and tailings dams feature prominently; they, too, have ambiguous associations. In one sense, they are signs of pollution. At other times, however – when a pattern is left by the water at the edge of a dam, or when a mine dump looks like a complex geological formation, or when the late afternoon light catches it at a certain angle and it glows with a halcyon light – they can be aesthetically pleasing, even beautiful.

Certainly, our sense of the aesthetic tends to function through the application of opposing and mutually exclusive categories: attractive/unattractive, beautiful/ugly, pretty/unsightly. Something is either visually appealing or it isn’t. But these categories are not fixed. Apart from the obvious point that individual tastes differ, collective definitions of what is aesthetically pleasing are social constructs, artificially imposed according to certain cultural prescriptions.

So another of the tasks of the artist is to challenge assumptions about what constitutes beauty and ugliness. Perhaps it is even to collapse such binaries altogether. A second recent exhibition, Jeannette Unite’s “Headgear”, does precisely that – in ways that are likely to leave many viewers uncomfortable.

The title of the exhibition, which has been displayed at the Gold of Africa Museum in Cape Town after a stint in Johannesburg, refers to the monumental metal structures that sit above mine shafts, also known as winding gear, mine heads or shaft heads. Unite sees some resonance between these icons of industry and the axis mundi, an archetypal vertical form that links earth and sky – also manifested in human constructions such as spires, pillars, towers and skyscrapers, or natural formations such as mountains and trees.

In contrast to the photo-realism of Christopher’s work, Unite’s drawings vivify her subjects. The columns of headgear represented seem to shimmer and shake, their edges blurred and softened. Monolithic structures are “tamed” – they remain enormous and implacable, but are simultaneously unstable and even fragile. Unite revels in geometric shapes, and seems to share what she calls “the delight that engineers have in creating idiosyncratic structures”.

For those of us who typically assume that industrialisation, and mining in particular, can be equated with avarice and irreparable environmental damage, the living and dynamic quality given to these cold steel machines produces an unexpected effect. They are rendered somehow humble and weak, and even elicit sympathy – a response that is heightened by Unite’s elegiac descriptions of “disappearing” industrial landscapes.

But hang on. In an era of climate change, water pollution, habitat destruction and species extinction, isn’t it a truism that the environmental harm caused by heavy industry is regrettable? And if this is the case, can we really experience what Unite calls “nostalgia” for the mining infrastructure that “has shaped our cultural and social heritage”? Moreover, hasn’t mining capital gone hand-in-hand with South Africa’s political ills over the last century?

Unite is not unaware of these problematic associations. It should be noted that her first mining-related artwork project, exhibited under the title “Earthscars”, was a critique of the “ravaged landscape” caused by alluvial diamond diggings on the West Coast. Indeed, Unite’s earlier work has been perceived by some as a form of “environmentally conscious art production” through “eco-alchemy”. She uses recycled industrial substances extensively, creating her own pastel colours using goldmine dust, metal oxides and tailings. In doing so, she not only explores the idea of “beauty from waste” but also highlights the complicity of many artists in industrial processes as end users of manufactured products.

Unite acknowledges that mining “is a source of servitude”, one “peppered with a contentious and uncomfortable early history” and linked directly to “legislated racial and social inequalities”. Nevertheless, she affirms that “mineral resource extraction is also about tremendous wealth and value” and feels strongly that, because mining is “an area in which we excel” globally – “South Africans mine deeper and are extremely innovative” – we should “celebrate what we are good at and endorse mining, which is the backbone of our social economy”.

There’s no doubt that mining occupies an uneasy place in the South African national psyche. It’s not just the early history of mining that is contentious; both the conditions under which miners continue to work and the environmental harm mining continues to cause are problematic. Yet mineral resources and engineering marvels are sources of patriotic pride and, undoubtedly, the stronger of South Africa’s dual economies has its foundation in the mines.

This kind of conflict has been the source of contradicting artistic and literary impulses since the beginning of the industrial revolution in the West. The Romantic English poets, for example, vehemently opposed the “satanic mills” of industry, yet across the Atlantic 19th-century American writers like Walt Whitman celebrated mechanical ingenuity and commercial verve.

The difficulty with the works exhibited in “Headgear” is that they take for granted a viewer’s familiarity with this intricate web. There is a hint of regret in Unite’s comment: “I don’t feel I come near to representing the complexity of our dependence and greed” when it comes to mining. Yet she insists that ultimately “once an artwork is out there in the public domain, it is the property of anyone who cares to view it; every person’s interpretation is valid”.

The explanatory notes accompanying the drawings do, however, guide viewers towards particular takes on the aesthetics of mining and industry. So, for instance, one is encouraged to recognise how “the metal oxidation on winding gear adds to the rustic industrial nostalgia of a disappearing landscape” or how equipment such as trammels and sieves and other surface engineering works “present abstract qualities that are rich inspiration for drawings and paintings”. In similar vein, there are commentaries that idealise the “African industrial revolution”.

We are left to ponder whether these positive glosses have something to do with Unite’s exhibition spaces. After all, Cape Town’s Gold of Africa Museum was established by AngloGold Ashanti (and Unite’s work was previously exhibited at the company’s Johannesburg headquarters in the refurbished Turbine Hall in Newtown), one of various commercial and industrial giants that have commissioned work from her.

The artist is not troubled by the alliance of art and nouveau capital, in which “new artworks and new buildings” are commissioned in order to “define and validate a new wealthy class”. To her patrons’ credit, they have not censored or interfered with Unite’s work. But one can’t help feeling that corporate interests have an impact on the production, promotion and reception of her work.

Still, in a country where sponsorship of the arts is a role that most companies avoid, no corporate patronage is unwelcome. This is particularly the case with Unite’s work; “Headgear” is, after all, carefully researched, astutely conceived, nuanced in its technical execution and – undoubtedly – visually striking.