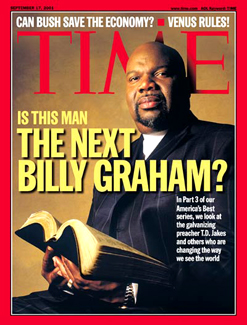 Bishop TD Jakes on the cover of Time
Magazine, which once voted him America’s
Best preacher.
(Image:Time.com)

In early October over 100 000 Christians descended on the Nasrec expo centre in Johannesburg for the MegaFest International festival, a two-day extravaganza of faith hosted by world-renowned preacher and bestselling author Bishop TD Jakes, once named the top preacher in the US by Time magazine.

Held from Saturday 11 to Sunday 12 October, the event is believed to have cost Jakes’s Potter’s House Church some (R65-million) US$7-million to host. Featuring top local and international gospel artists and a number of respected preachers, it was the first MegaFest to be staged outside the US.

“We can no longer live in corners and just care about ourselves,” Jakes said at a news conference before the event. “Americans are becoming increasingly global-minded. If there were anything positive that came out of 9-11, it’s the realisation that we are our brothers’ keepers.”

“There is a unique role that religion plays in South Africa,” he said. According to the 2001 census, 35.8-million South Africans are Christians – 79.8% of the population. Religious leaders such as Archbishop Desmond Tutu played an important role in the end of apartheid.

Motsepe, who is a devout Catholic, welcomed the US preacher’s presence in South Africa. “We have always felt there is something special and emotional about the connection between Africans and African-Americans,” he said.

More than a thousand African-Americans attended the festival. For many, the trip marked a “journey back to the motherland”.

At a press briefing during the festival, Jakes said he had no idea what to expect, as MegaFest had been the first time his church had undertaken so massive a project. But it was clearly a success.

“I had problems getting to the venue myself, there were so many people coming in on the opening day,” he said.

People from all walks of life endured the hot sun to listen to Jakes and the other preachers deliver powerful messages.

Operating under the theme Change, over the two days speaker after speaker encouraged the crowd to use their faith to live a quality life emotionally, spiritually and physically.

Jakes said change is a universal phenomenon affecting every area of society.

He said change would not come from the government or the White House, but from the church.

First held in 2004, MegaFest is now one of the largest religious gatherings in the US, attended by more than 700 000 people to date.

Created by Jakes as a festival for fellowship, spiritual rejuvenation and personal growth, it includes youth events, live concerts and activities for the entire family.

Last year the event took a hiatus, with Jakes announcing that for the first time the event would be moved out of the US, to South Africa.

It took over a year to plan MegaFest International, with about 150 South Africa-based staff from the Potter’s House Church working on the logistics.

“I believe that the true purpose of the ministry is to go beyond the traditional wall and minister to the world,” Jakes said. “MegaFest International provides us with that platform.”

Caring for the community

MegaFest brought with it more than a two-day church event, but also a number of philanthropic initiatives. One of these is MegaCare, a comprehensive health and educational campaign.

As part of the Megafest programme, MegaCare intends on providing healthcare and educational opportunities in South Africa and Swaziland. Some of the health initiatives took place during the two-day festival, while others will continue for a week in South Africa, Swaziland and Zambia.

Other Potter’s House projects run during Megafest included the construction of 12 houses for low-income families in Tembisa, east of Johannesburg, allowing them to move out of shacks into real homes.

In Swaziland, the Potter’s House for Children orphanage provides care to children aged six and younger who have lost one or both parents to Aids. The children receive an education, medical care and meals. The centre will also be provided with safe and clean water from a new well.

A community in Zambia was also provided with fresh water, with the MegaCare campaign rehabilitating two wells.

Since then his rise in the Christian fraternity has been astonishing. He is an award-winning and best-selling author, and a sought-after conference speaker.

In 2001 Jakes appeared on the cover of Time magazine, which named him America’s best preacher. In 2005 the magazine listed him as one of the 25 most influential evangelicals in the US, and in 1999 the New York Times identified him as one of the five top evangelists most frequently cited by scholars, theologians and evangelical leaders.

This acclaim comes partly from Jakes’s bestselling books, which deal in particular with issues of particular interest to women. His most popular book, Woman, thou art Loosed, published in 1993, has sold millions of copies around the world.

What started out as a simple Sunday-school curriculum, the Woman thou art Loosed theme grew into a book, was later adapted into a stage-play, a conference and a full-length feature film.

In addition to his 30 or so books, Jakes is also an accomplished musician with his Potter’s House Choir, which has recorded a number of award-winning CDs.

On the pulpit, Jakes is known for hosting powerful conferences. In 1993 Jakes created a conference for men called ManPower, which helps men of all races and background address specific needs, hurts and struggles from a biblical perspective. Ten years later, in 2003, the conference was attended by a record-breaking 44 000 men.