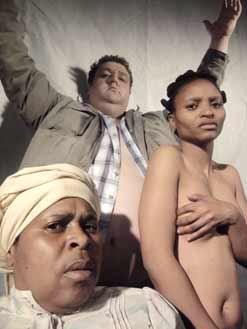 Some of the cast members of Madonna of Excelsior in the promotional picture for the play. 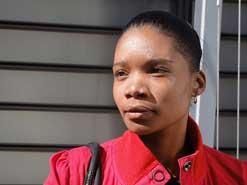 Diana Maseko, who plays Popi in the play.

The two directors, Jerry Pooe (L) and Roel Twijnstra have a chat in between rehearsals.
(Images: PACOFS)

Ten years after Zakes Mda’s acclaimed novel The Madonna of Excelsior was published in 2002, a stage adaptation is now ready for South African theatre audiences.

The play is directed by Netherlands-based Roel Twijnstra and South African playwright and director Jerry Pooe. It opens on 15 August at the Andre Huguenet theatre in Bloemfontein and runs until 18 August when it moves to Johannesburg’s Windybrow theatre, opening there on 23 August.

Based on a real-life drama, Madonna follows the trials of a poor black family living in Mahlaswetsa township next to Excelsior, a small farming town in the Free State province. The mother and protagonist, Niki, was one of 14 women arrested in 1971 for their part in a scandal in which they bore children with several of the area’s white farmers.

The women, along with five farmers, were charged for violating the controversial Immorality Act, which prohibited people from having interracial sex. For the short duration of the trial – during which the women caused frustrations for the state by refusing to testify against the farmers – a great deal of attention was focused on the town by local and international journalists who came in their hundreds to hear the story.

The government dropped the charges, mainly as a way of saving face, although the spectacle surrounding the scandal had a negative effect on many of those involved. Some of the women on trial committed suicide, according to Twijnstra, who researched the area for about a year prior to the start of production.

Niki’s daughter Popi, whose birth was a result of her affair with a character that Mda named Tjaart Cronje, went on to live a life somewhat burdened by the stigma attached to her family by some members of the community.

What inspired the play?

The idea to make the play first came to the two directors five years ago when Pooe gave Twijnstra a copy of the novel to read.

The two started doing research for the play and found that some of the people on whom Mda’s characters are based are still living in the town. Many people don’t want to talk about the scandal to this day, said Twijnstra – a sign of how deep the scars run.

In modern-day Excelsior Twijnstra also observed economic disparities between the black and white communities, with the white community still having access to and owning a lot of property, while for the black locals the dire situation described in the book has not improved. There remains a bizarre tension amongst the people.

“The scenario was shocking and inspiring for us, and we decided about a year ago that this is even more of a reason to make the play there rather than Johannesburg.”

With the Performing Arts Centre of the Free State (PACOFS) changing from just being a receiving house for touring productions and becoming a producing house, it made even more sense.

On a personal level, Twijnstra has wanted to do something with the theme of mixed-race relationships for a while, an issue to which he relates. His wife is black, and originally from KwaZulu-Natal.

“I haven’t seen that many productions that portray these relationships,” he said, adding that not many of the Madonna cast have worked with people of other races before, so it was an opportunity to bring talents from different backgrounds together.

Asked what Mda – who had been in the country and visited the set during rehearsals – had to say about the play, Twijnstra said he was an inspiration.

“He liked what he saw, and because he is honest in his approach, we knew that he meant it.”

The cast of characters

Twijnstra said that by making Niki and Popi the centre of the play, the angle of the relationship between mother and daughter became a partial tribute to Women’s Month.

He has a lot of faith in the actresses who play the two characters and their ability to bring off the demanding portrayals. Popi is played by Diana Maseko, who has been in leading roles in the 2011 production Spirits and Bones as well as in Seipati, made in 2010.

The role of Niki is played by two actresses, as the story follows her younger experiences as well as her relationship with Popi when they are both older. The younger character is played by Tshidi Thenyane, while Dieketseng Mnisi, whose experience goes back many years, plays the more mature role. Mnisi is known by local television viewers as Caroline in popular series Rhythm City.

By Twijnstra’s own admission, casting Popi’s role was the biggest challenge, partly because there is some nudity related to the part, so finding someone who is open minded and talented enough to portray this well proved difficult.

“She (Maseko) is a huge talent from a community theatre background, and is very ambitious. I think she’ll grow a lot over the next few years.”

The directors opted to pay tribute to Excelsior by using Bloemfontein, about 110km northeast of the small town, as their base. They also ended up with a cast of which 40% are local actors.

“There was a great deal of interest from the local community in terms of auditions, despite the storyline being a sensitive topic,” said Twijnstra. “Among the white farming community as well, many people came through.”

Film actor Mpho Lovinga, who played the lead in Max and Mona, has double roles – as Niki’s estranged husband Pule, and as Viliki, her son and Popi’s brother.

The adaptation was written by Kobus Moolman, who has won numerous awards in literature, theatre writing and radio drama work. He currently teaches creative writing at the University of KwaZulu-Natal.

Other works by the directors

Twijnstra has worked on several projects in other African countries, including Morocco, Uganda and Benin. With a career that goes back to 1981, he has over 80 theatre productions to his name and has worked with European theatre icons such as the late Viola Spolin, Peter Stein and Lodewik de Boer.

Most of his work in Africa is centred on young people and the social issues that affect their everyday lives.

Through the South African branch of his theatre development company Twist International, some of Twijnstra’s projects have highlighted topics very close to the hearts of South Africans, like xenophobia, HIV/Aids and poverty.

Some of Twist’s smaller projects have been staged in the annual National Arts Festival that takes place in Grahamstown in July.

Pooe, meanwhile, has been in the development of community theatre for over 20 years, having written his very first script at the age of 17. He studied speech and drama at the former University of Natal (Now the Durban University of Technology) before founding Eager Artists Productions, a company that offers training for young actors and musicians.

Prior to his work with PACOFS, he worked as the cultural development officer at Durban’s Playhouse Company.