As the world pauses to mourn celebrated African American author, poet and human rights activist, Dr Maya Angelou, we take a moment to remember her words in our time of grief.

The ‘caged bird’ who freed the minds of racist America, Angelou overcame poverty segregation and a history of sexual violence to become one of the most globally influential writers. Her poetic memoir ‘I Know Why The Caged Bird Sings’ was one of the first non-fiction best sellers by an African American woman.

The poem cycle bore witness to the brutality of racism in the southern US states through the life experiences of Marguerite Ann Johnson (Angelou’s birth name). It reveals in stark and lyrical language her abandonment by her parents, her by her mother’s boyfriend. It spoke elegiacally of her homelessness and her life as a teenaged mother.

Angelou rose above her circumstances and has rightly been celebrated for her ability to bring light to the struggles of women and African Americans. ‘Human beings are more alike than we are unalike,’ she was often quoted as saying.

She received dozens of honorary degrees and was nominated for a Pulitzer Prize for her poetry and a Tony for her acting. She won two Grammys for spoken word albums of her poetry and was awarded the Presidential Medal of Freedom in 2010.

Tributes were pouring in from all corners of public life – from authors to politicians and musicians, both young and old.

But when I start to tell them,

It’s in the reach of my arms

The span of my hips,

The stride of my step,

The curl of my lips.

I walk into a room

Just as cool as you please,

The fellows stand or

Fall down on their knees.

Then they swarm around me,

A hive of honey bees.

It’s the fire in my eyes,

And the flash of my teeth,

The swing in my waist,

And the joy in my feet.

Men themselves have wondered

What they see in me.

They try so much

But they can’t touch

When I try to show them

They say they still can’t see.

It’s in the arch of my back,

The sun of my smile,

The ride of my breasts,

The grace of my style.

Just why my head’s not bowed.

I don’t shout or jump about

Or have to talk real loud.

When you see me passing

It ought to make you proud.

The bend of my hair,

the palm of my hand,

The need of my care,

‘Cause I’m a woman 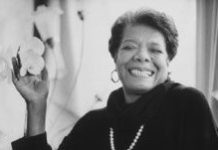