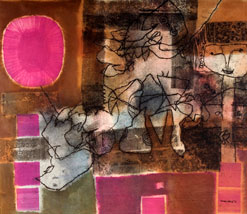 If, as the Biblical saying has it, a prophet is never recognised in his own country, then it seems the same is true of artists living in exile. Many South African writers, actors, musicians and visual artists who left the country to escape the constraints of apartheid were acclaimed in their adopted countries but were largely forgotten at home.

This, certainly, seems to have been the case with Durban-born Louis Khehla Maqhubela. Resident in London since the 1970s, Maqhubela has only occasionally had his work prominently exhibited in the land of his birth; consequently, its significance in both the development of so-called township art and what might be termed modernist abstraction in South African art has rarely been acknowledged.

All that is changing thanks to A Vigil of Departure, a retrospective exhibition covering Maqhubela’s career over the course of half a century. In her catalogue essay and the material accompanying the exhibition, curator Marilyn Martin – director of art collections for Iziko Museums of Cape Town – situates the artist’s output within a fascinating biographical narrative.

While still a teenager at a Soweto high school, Maqhubela attracted attention for his experiments with watercolour and oil paints, charcoal and ink.

In the late 1950s, he enrolled as a student at the Polly Street Art Centre in central Johannesburg – a vitally important establishment in South African art history where, under the mentorship of Cecil Skotnes and others, talented young black artists mastered their technique and were given a platform for promoting their work.

Maqhubela – who contributed to the Homage to Skotnes portfolio paying tribute to this elder statesman of South African art after he died in 2009 – has described Polly Street as “our magical password, our ID, to break into the exclusive echelons of the Johannesburg art scene”.

Once he was part of that scene, Maqhubela was identified by various reviewers as “an artist of great imaginative strength” who demonstrated “a boldness and control of composition”. At that stage, his paintings were predominantly depictions of everyday life in what was then becoming a generic setting, the black township created by racial segregation.

This form of township art has become somewhat denigrated by critics who see it as a formulaic and clichéd theme among many black South African artists. Martin is one of those who affirms the limitations of the genre, and she places greater value on the work that Maqhubela would subsequently produce.

Nonetheless, visitors to the exhibition should not gloss over the early pieces. For one thing, township art from the 1950s and 60s valuably documents certain details from this period that might otherwise fall away from our collective memory. Maqhubela’s 1961 watercolour One Bottle One Orange is good example.

There are also striking images such as the haunting charcoal drawing Little black boy lost in a white wood, and photographs of the mosaics that Maqhubela produced for various public spaces in Soweto.

The years 1966 and 1967 marked a turning point in Maqhubela’s career: he was awarded first prize in the annual competition hosted by Johannesburg’s Adler Fielding Gallery and spent three months in Europe. During this trip he encountered the work of Paul Klee and other European artists, who would prove to have a strong influence on him; he also met South African expatriate artists such as Gerard Sekoto and Douglas Portway.

Martin notices an immediate shift in Maqhubela’s style upon his return to the country: paintings such as A Township Scene and Houses and Fences from 1968 veer away from mimetic representation. Maqhubela would increasingly focus on the inherent aesthetic appeal of colour, line, shape and form – abstraction as opposed to realism.

Of course, there are numerous pieces pre-dating the trip to Europe that indicate the artist’s fascination with geometry and fragmentation: his portraits Labourers, Wood Collectors and Man and Dog, for instance, along with the prize-winning work itself, Peter’s Denial. One could argue that his European experiences did not so much change his style as confirm an already-existing, albeit latent, inclination.

In the 1970s Maqhubela produced a steady stream of untitled compositions in which he dabbled with combinations of shapes, colours and textures overscored by long, unbroken, shaky black lines that sometimes do and sometimes do not trace the outlines of identifiable figures. From the 1980s onwards, there is evidence of brighter and bolder brushwork – a confident abstract artist making the most of his palette.

It would not, however, be fair to say that Maqhubela’s abstract work is simply a revelling in aesthetic delight. His paintings and etchings give expression to a complex symbolic universe. The recurrent images of birds and fish seem to be allusions to Christian metaphors for aspects of religious faith.

Maqhubela has, from a young age, been a disciple of Rosicrucianism, that somewhat obscure but potent enquiry into esoteric knowledge and enlightenment. As such, his triangles and circles are not simply geometric forms but sacred images, manifestations of “beautiful, simple, universal laws”.

While Maqhubela recalls that “abstract art by a black practitioner was a declaration of war against being stereotyped”, he is also insistent that abstraction is not a mode of expression exclusive to European modernism – far from it.

“Abstraction has, for centuries, always been Africa’s premier form of expression,” he declares. Looking at recent works such as Ndebele Gate, Shield, Inyoka (isiZulu, meaning “snake”) and the Isiqhaza series (designs for Zulu round earrings), it’s hard to disagree with him.

These resonances help to elucidate the title of the exhibition. Maqhubela feels that, even though he has lived abroad – in Spain and then England – since 1973, his imagination continues to be fired by South African cultural traditions and current affairs alike. He has been “keeping a vigil” for his homeland. Now, thanks to Martin and others, South African art lovers are able to return the favour.