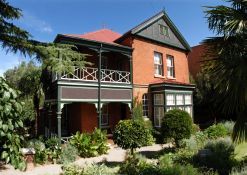 Freshford House museum is one of the few remaining upper- middle class houses of the Late Victorian and Edwardian periods in Bloemfontein.
(Image: National Museum) 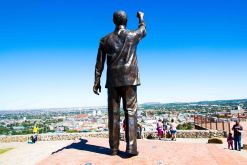 The 8m Nelson Mandela statue on Naval Hill is the tallest statue of the former statesman.(Image: geolocation)

The Wesleyan Church in Waaihoek is the place in which the ANC was founded.(Image: National Museum)

But while the municipality is well known for its pivotal place in the country’s history, less is known about its cultural diversity and rich history.

The Wesleyan Methodist Church, in Waaihoek, Bloemfontein, saw the founding of the ANC in 1912.The party was founded in the school room located at the church. The church has recently been renovated and visitors can now enjoy a tour of the facility. The ANC celebrated its 100th anniversary in Waaihoek in December 2012, with a traditional cleansing ceremony where several animals were slaughtered.

Founding ANC member Thomas Mapikela’s house is in Batho, the oldest township in Mangaung. The 12-roomed red brick double storey sits at the corner of Community and Makgothi Streets. Built in 1926, it was a venue for many ANC and community gatherings.

“The house is currently being redeveloped, however, visitors may still go to take pictures,” said Angus Peterson, tourism manager for Mangaung. The Mapikela family still lives in the house.

Taking a trip to the Anglo-Boer War Museum in Bloemfontein will give visitors insight into a significant part of South Africa’s history. The museum houses an art collection, dioramas and exhibits depicting the war’s events and effects.

One such exhibition is the “Universal Suffering” art display, opening on 11 October 2013.

A number of South African artists have been invited to showcase their artwork representing the events that took place during the war. “The 11th of October is also the day on which the war broke out in 1899,” said Vicky Heinus, collections manager at the museum.

The museum also houses the National Women’s Memorial, a sculpture depicting a standing woman and a seated one holding a child. The piece was created by Dutch-born sculptor Anton van Wouw to acknowledge the pain and suffering endured by women and children during the war, which took place from 1899 to 1902. The war saw 26 000 Boer women and children dying, along with between 14 000 and 24 000 blacks.

The Freshford House Museum, located at 31 Kellner Street in Bloemfontein, is a satellite of the National Museum in Bloemfontein. It is one of the few remaining upper-middle class houses of the Late Victorian and Edwardian periods in the city.

The house was designed and built by architect John Edwin Harrison for his family, with construction being completed in 1897. It is characterised by its unplastered red brick walls, bay windows, corrugated iron roof, cast-iron finishes and open veranda.

The house features a few pieces of the Harrison’s original furniture and household articles, along with carpets, curtains and wallpaper characteristic of the period. The National Museum acquired Freshford House in in 1982; it was restored and opened to the public in 1986.

The route starts in the Bloemfontein Central Business District (CBD) with period-piece architecture on show. These buildings include the Bloemfontein City Hall, built in 1935. The building is on President Brand Street and features an Italian-inspired interior and a sandstone exterior.

Bloemfontein, which translates as “flower fountain”, is the judicial capital of South Africa and is home to the Supreme Court of Appeals, the highest court in all non-constitutional cases.

The Mangaung Municipality also honours former President of South Africa, Nelson Mandela. It is home to the tallest statue of the former statesman. The 8 m high statue is at Naval Hill, the highest point in Bloemfontein. “Standing at Naval Hill offers a panoramic view of Bloemfontein where people can also get a glimpse of the Wesleyan Church in Waaihoek,” says Peterson. Also on Naval Hill is a white horse built from white-painted rocks. It served as a landmark for British cavalry during the Anglo-Boer war.

For the nature enthusiast, the Franklin Nature Reserve would be a must-see. The

250-ha wildlife reserve is in heart of Bloemfontein and is one of the few city-based game reserves in the world. Giraffe, blue wildebeest, Karoo scrub Robin, the fairy flycatcher and violet-eared waxbills all make the reserve their home.

Bloemfontein also hosts the Mangaung Cultural Festival (Macufe), one of South Africa’s biggest musical festivals. It takes place annually in October and has been on Bloemfontein’s calendar since 1997. This year it will take place from 4 -14 October under the theme “When Your Heart and Soul is African”.

The small town of Thaba Nchu is one of the oldest settlements in the Free State and falls under the leadership of Her Majesty Kgosigadi Audrey Gaongalelwe Moroka. It is home to 42 rural villages. In keeping with its nod to tradition the town hosts the Barolong Boo Seleka Cultural Village, showcasing the heritage and customs of the Barolong tribe and Batswana people. The area is 65 km from Bloemfontein and its population consists of mainly Tswana and Sotho people.The grave of Chief Moroko, the founder of the Sotho nation, is also in Thaba Nchu.

Botshabelo, meaning “place of refuge”, is believed to be the second largest township in the Free State and lies 12 km from Thaba Nchu. The township was established in 1978 after Xhosa and South Sotho people tried to unsuccessfully settle in Thaba Nchu. The Botshabelo arts and crafts centre features a variety of African artefacts, traditional African garments, weavings and beadwork.