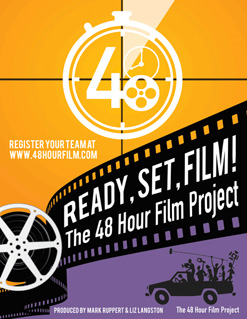 More than 150 48 Hour Film Project
competitions have now taken place around
the world in 90 cities, with 70-odd
countries participating. The smallest team
has had one person, who set up the
camera to film himself, and the largest on
record had 116 people and 30 horses.

October in Johannesburg means rain after the long dry winter, but predicting it is an art. You can believe the stony-faced forecasters or traditional wisdom – my grandmother used to say it never rains before Kruger Day, celebrated on 10 October in the old days.

Whatever the case, rain is anathema for any filmmaker on a tight schedule, and as any rookie soon learns, no shoot is without a rainy day contingency. So it was with some apprehension that 24 filmmakers set out to brave the first weekend in October to make a four- to seven-minute film in 48 hours. Yes, a crazy idea. No room for mistakes, and definitely no room for rain.

It was the first time the 48 Hour Film Project (48HFP) was hosted in South Africa, with Johannesburg only the second African city to take part after Casablanca. American Mark Ruppert came up with the idea in 2001. He and filmmaking partner Liz Langston tried it out with several other filmmakers from Washington DC and were surprised by the results. Not only were the films watchable, but the experience brought with it a set of unique possibilities.

Simple idea. What about the execution? Well, it’s just plain murderous … Start creating at 7pm on a Friday night and hand in your film at 7pm on Sunday. In this time conceive, write, imagine, argue, rewrite, assign roles, confirm cast, set up shoot, rewrite, shoot, edit, compose music, finesse, mix, rewrite, play out … and deliver. Oh, and somewhere in the mix try to get some sleep!

More than 150 competitions have now taken place around the world in 90 cities, with 70-odd countries participating. The smallest team has had one person, who set up the camera to film himself, and the largest team on record had 116 people and 30 horses. According to the project’s website, they’ve had 9 000 teams take part so, with an average of 15 people per team, that means 130 000 people have heeded the 48-hour call. (Check out YouTube for past films using the keywords “48 hour film”.)

The parameters are severe, the rules are strict.

No preproduction is allowed. Everything appearing on screen must have been created within 48 hours. Teams draw a genre out of a hat at kickoff. Genres for Johannesburg’s inaugural project included the usual suspects – romance, comedy, buddy film, drama – as well as intimidating genres like film noir, historical fiction (how on earth?) and mockumentary. The genre rule is nifty because it eliminates the temptation to cheat. Teams are also allowed to prepare conceptually and brainstorm a bunch of “what if?” scenarios; there is some generosity in this conspicuously challenging set of limitations.

Also compulsory for all films is a nominated character (for Joburg, Desmond or Dineo), a prop (soccer ball) and a line of dialogue (“I’m gatvol” – local slang for “I’m fed up”). And because this was Joburg’s first time in the competition, all films had to feature a city landmark.

But why on earth would anyone do this? For kicks? For reward? For acclaim?

It’s true, there is the allure of a prize, a not-to-be-scoffed-at Panasonic digital camera. Plus the winning film represents South Africa at the Miami International Film Festival next year and could go on to be screened at the Cannes festival in May.

All good and well. But it’s more likely to be the über-challenge that wins people over: it just seems impossible, enough of a dare for most filmmakers. (By the way, the competition is open to anyone, industry professionals, amateurs, students or complete newcomers. It’s also voluntary so no person may be remunerated in any way. It really is a labour of love.)

As one of the 24 filmmakers, I can tell you the schedule is brutal. A good idea is to map out the weekend with a delivery timeline in hourly and half-hourly blocks. Another creative solution is to spread the load with two crews shooting at once.

But the biggest challenge is getting the team together. It’s easy enough to persuade your best buddy cameraman, but you can imagine the phone calls to actors … “Please can you standby to play the role of the evil, hen-pecking Cassandra, who offs her husband and hides his body in a cold room. Er … but if we get road movie, you might throw him in a motel bath … Well, that’s if you aren’t a drag queen in the serial killer mockumentary. Okay?”

Friday night is a creative burst. The core team meet and come up with a script. In our case, there was no scriptwriting team; we opted for a narrative and scene descriptions. This means actors improvise dialogue on the set. It also means the editor has a lot more to deal with in the cutting room. Not so pleasant. Some teams started shooting on Friday night but we made a conscious choice to shoot in daylight, and our genre, dark comedy, did not need night, as film noir or horror would.

Lining up locations is allowed and the organisers brought on board the Johannesburg Metro Police Department. A good move. But for interiors, it was a case of every man for himself: “Yes, that’s right sir, we want your restaurant/ high rise apartment/kitchen on the busiest day of the weekend … but only if we get science-fiction. You know, for the scene where the West African drug lord turns into a lizard … ?” Spinning lines on the art of filmmaking, personal passion and the love of creation is de rigueur in the charm offensive.

The 48 Hour Film Project’s mission statement is to encourage filmmakers and would-be filmmakers “to get out there and make movies”. The rigid deadline of 48 hours “puts the focus squarely on the filmmakers – emphasising creativity and teamwork skills,” say the international organisers. They understand full well that the time limit places pressure on teams, but they believe this is also liberating with the “emphasis on ‘doing’ instead of ‘talking'”. Ouch.

Mukundi and Itumeleng first encountered the project in 2009 while teaching English in Seoul, South Korea. They were so impressed by their experience that they approached the international body to produce it here.

“The most challenging thing about Seoul,” says Itumeleng, “was that no one speaks English. Our team was made up of foreigners. It was a challenge from a producing standpoint, to lock down locations. No such luxuries as permits … and I had to act in it as well. Seeing myself on screen was yucky!”

The Joburg entries have a high standard, say the local organising team. They expected to see movies that were shoddy and incomplete but they feel the entrants have done South Africa proud.

“We believe that it’s very possible some of the films will make it to Cannes,” says Itumeleng. Mukundi adds: “This is the first big event we’ve organised, so we didn’t expect anyone at the launch never mind the overwhelming support from a wide variety of people, and not only students. There was a nice mix of people.”

Positive feedback to the organisers has also been inspiring: one or two first-timers reported thinking of taking up film as a profession after the weekend’s experience. Read the fascinating blogs the teams have written about their experience on the Johannesburg 48 Hour Film Project website.

No-one moaned about the rain because there wasn’t any. My grandmother was right. But with the constraints of the competition as they are, it’s a real blessing that the weekend was sunny and clear. Maybe next year we’ll get to see Whinging in the Rain?