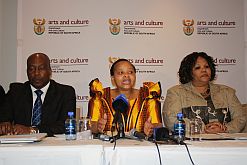 The graves of Helen Joseph, Lilian Ngoyi
and Charlotte Maxeke will be declared
national heritage sites by the department
of arts and culture and the South African
Heritage Resources Agency on 20 August
(Image: Nosimilo Ramela)

In celebration of Women’s Month in South Africa, the Department of Arts and Culture has launched a number of initiatives to honour female icons who’ve helped shape a more democratic society.

Women’s Month is always held in August, with a public holiday on the ninth, to pay tribute to the more than 20 000 South African women who marched to the Union Buildings on that date in 1956 to protest against unjust pass laws, which enforced racial segregation.

This peaceful demonstration was led by apartheid activists Lilian Ngoyi, Helen Joseph, Rahima Moosa and Sophie de Bruyn, and put women at the forefront of the political struggle.

“Through their actions, they helped to lay the foundations for the building of a non-racial, non-sexist and democratic country,” said Minister of Arts and Culture Lulu Xingwana.

She was speaking at her department’s Women’s Month launch at The Rosebank Hotel, Johannesburg, on 3 August 2010.

Women have always played a central role in the socio-economic development of society, but their roles have often been overlooked, the minister said.

“The programmes we are launching are to declare that women also made a contribution.”

The department and the South African Heritage Resources Agency will declare the graves of Joseph, Ngoyi and fellow freedom fighter Charlotte Maxeke national heritage sites on 20 August. “This is part of the national legacy projects which honour the forgotten and unsung heroines of the liberation struggle,” said Xingwana.

The ceremony will take place in Soweto, where Joseph and Ngoyi are buried. “The programme will include a church service, speeches and the unveiling of site plaques,” the minister added.

A day before this ceremony on 19 August, the department, in partnership with the University of the Western Cape, will host a memorial lecture in the name of another anti-apartheid icon, Dulcie September, who was assassinated in 1988 while in exile in France.

“Through this lecture the government acknowledges her contribution towards the liberation of the people of South Africa,” said Xingwana.

The lecture will be delivered by award-winning British writer and editor Margaret Busby, with guest speakers Dr John Daniel – a researcher from the Human Sciences Research Council – and South African ambassador to the US, Barbra Masekela.

Xingwana said this lecture was a symbol of her department’s commitment to women: “We constantly see lectures recognising male heroes and rarely do we have lectures about women.”

“We will host a women writers’ symposium under the theme Women’s words, African worlds, renewing a dialogue between African women writers and women of African descent,” Xingwana said at the launch.

The gathering will take place from 25 to 26 August at two Johannesburg venues: the Windybrow Theatre and Museum Africa. It will focus on fiction and non-fiction writing, journalism and the formation of an African Women Writers’ Network.

Invited writers who will participate in the symposium include Tsitsi Dangarembga of Zimbabwe, Lola Shoneyin of Nigeria, Shailja Patel of Kenya and Lauretta Ngcobo, Miriam Tlali and Elinor Sisulu from South Africa.

To reaffirm the often marginalised history, heritage and culture of the indigenous Khoi and San Bushmen of South Africa, the department will unveil the design for the Sarah Bartmann Centre of Remembrance, on the 22 August in Hankey, in the Eastern Cape province.

Bartmann was a Khoi slave who was lured to London in 1810 and put on show as a “scientific curiosity”, owing to her physical features that were perceived by Europeans as “freakish”.

She was later moved to Paris, where she was exhibited by an animal trainer in severely degrading displays intended for public amusement.

She died in France in December 1815 and her remains were exhibited in a museum there until 1974.

Years later, then president of South Africa Nelson Mandela requested that her remains be returned. This was done, and on 9 August 2002 Bartmann was buried in Hankey, the town of her birth.

The country is currently taking part in the six-month-long Shanghai World Exhibition, for which the Department of Arts and Culture developed a programme to showcase the talents of South African women artists and performers.

Each country participating in the Shanghai Exhibition is allocated a national day – and South Africa has chosen 9 August. “As part of celebrating our national day we will hoist the South African flag,” said Xingwana.

All programmes launched will be sustained beyond the month of August to help empower and inspire women, Xingwana said, adding that “freedom is not complete until women are free from all forms of abuse, poverty, and deprivation”.

Remembering the voices of the women of 1956 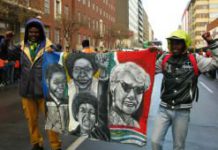 Women in the struggle remembered 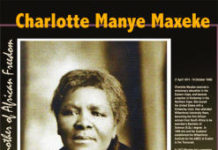